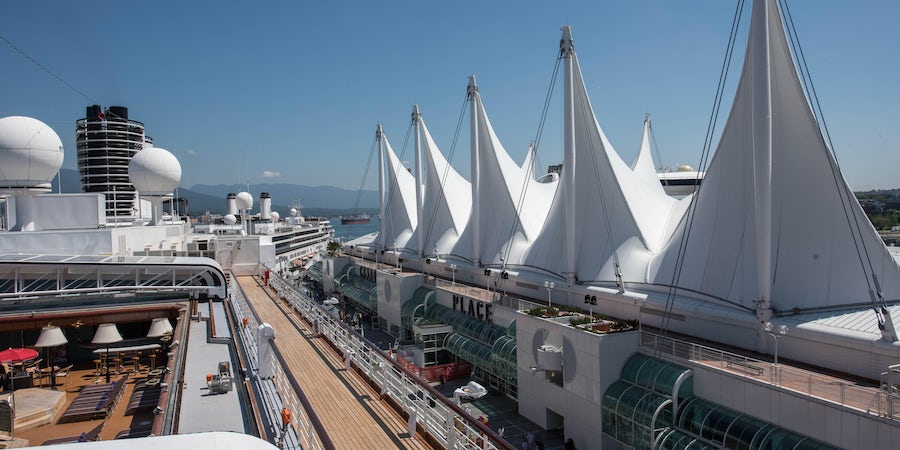 (Updated 5:38 p.m. EDT) -- In another blow to the already devastated cruise industry, Transport Canada on Thursday elected to extend its ban on cruise ships entering Canadian ports or waters through February 28, 2021.

The ban, which has been in place since March, continues to restrict passenger vessels carrying more than 100 people from operating in Canadian waters, or calling on Canadian ports of call. Vessels over 12 people are prohibited from entering Canada's Arctic waters.

The restrictions only apply to cruise ships and pleasure craft. Ferries and ships used for substance fishing, harvesting or hunting are exempt.

“As Canadians are doing their part to help reduce the spread of COVID-19, the Government of Canada is working hard to ensure Canada's transportation system remains safe," said Canadian Transport Minister Marc Garneau.

"The extension of these temporary measures for cruise ships and other passenger vessels in Canada reflects our ongoing work with all levels of government, transportation industry stakeholders, and Indigenous peoples to help ensure appropriate measures are in place."

While the Canadian cruise season on both coasts would largely be over now under normal operational circumstances, the 2021 Alaska cruise season is poised to start in April, with calls to Canadian maritime provinces like Nova Scotia and New Brunswick due to kick off shortly after that.

Transport Canada's latest ruling could destabilize the future of the 2021 Alaska and Canada and New England cruise seasons as cruise line itinerary planners struggle to find suitable deployments for their fleets.

Cruise Critic reached out to several ports on both coasts for comment on the extension of the cruise ban by Transport Canada.

Greater Victoria Harbour Authority (GVHA) CEO Ian Robertson stated that the Port supports Transport Canada's ruling, but continues to look for solutions to successfully resume cruise operations.  Victoria, along with many other Canadian ports of call, has been significantly impacted by the loss of the entire 2020 cruise season in Alaska and British Columbia this year.

"Regulation over cruise in Canada is in the hands of Transport Canada," said Robertson in a statement. "When Transport Canada suspended cruise visitation in Canada until July 1 and then extended it to Oct. 31, 2020, I fully supported this decision. With today's extension to February 28, 2021, I continue to support their decision-making process and outcomes. Nothing is more important than reducing the risk of COVID-19 and keeping our community safe."

Robertson said that the GVHA is advocating, in collaboration with other Canadian ports, for a timeline and process for a safe resumption of cruise across the country.

Despite being well under the acceptable passenger limit, many smaller operations on Canada's West Coast, including Maple Leaf Adventures and Outer Shores Expeditions, were prohibited from conducting overnight cruise operations this summer by local health authorities.

"Our organization is also engaged with cruise line management as they develop and unveil their plans for a safe return of cruise in other markets, as well as on the west coast of Canada," said Robertson.

"Our team is planning for cruise to resume in 2021 and ensuring that the Victoria Cruise Terminal will be prepared to welcome guests when it is safe to do so."

Across the Strait of Georgia, the Port of Vancouver continues to work with the Association of Canadian Port Authorities Cruise Committee on the safe resumption of cruise operations next year.

"The safety of passengers and guests who visit Canada Place remains our top priority," a Port of Vancouver spokesperson told Cruise Critic. "As a Canada Port Authority, we continue to follow regulations set by Transport Canada regarding travel and the cruise season as a result of COVID-19. We are also actively engaged in discussions with the cruise industry and tourism partners to support the industry under these challenging conditions."

On the other side of the country, a spokesperson for the Port of Halifax noted that any return to cruise will be subject to its success in other areas. The Port noted there are still concerns around the resumption from cruise from U.S. ports, but added that Nova Scotia is a bucket-list destination for many, and the Port is ready to move quickly once cruises are given the green light.

"The fundamentals of tourism remain strong; Nova Scotia is a place that people want to visit, and the cruise lines want to come here," the Port of Halifax said. "We remain a safe, welcoming destination with natural beauty and authentic experiences to offer."

That sentiment was echoed by Port Saint John. The New Brunswick port is a popular call for Canada and New England voyages during the spring and summer months.

"We take the health and safety of our workforce and communities seriously, as well as the safety and well being of passengers and crew, and respect and understand our government’s regulations with respect to borders, including marine borders," a spokesperson for Port Saint John told Cruise Critic in an email.

Representatives for the Port of Montreal declined to comment, noting the city's cruise season doesn't begin until May.

“We understand and appreciate the careful approach that Transport Canada and the federal government have taken in response to these unprecedented circumstances,” said Barry Penner, legal advisor to Cruise Lines International Association (CLIA) Northwest & Canada, based in Vancouver. “Although we are disappointed at the length of the restrictions, our top priority remains the health and safety of passengers, crew members and the communities we visit.”

The cruise industry welcomed news late Friday that the U.S. Centers for Disease Control and Prevention (CDC) was amending its "No-Sail" order and replacing it with a framework for the gradual resumption of cruise.

Cruise Critic will update this story with more information when it becomes available.