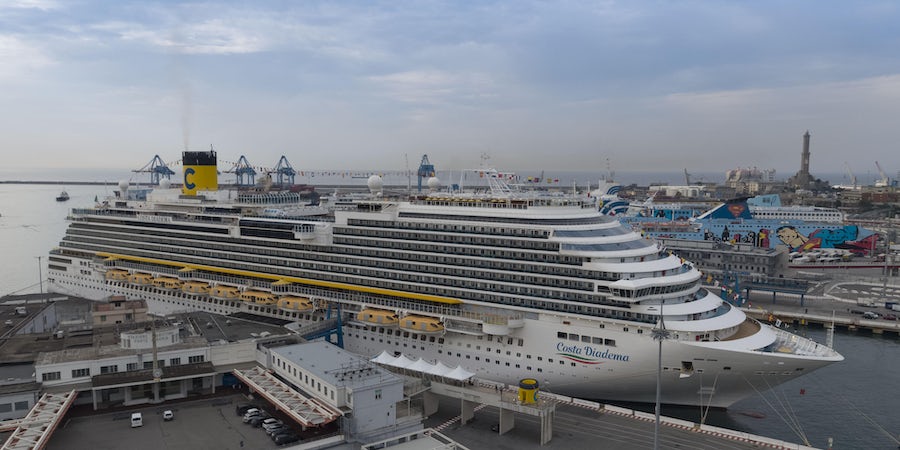 (10:55 a.m. EDT) -- Health and safety protocols developed by Costa Cruises seem to have contained a COVID-19 outbreak on a recent charter cruise, but the line has canceled a subsequent sailing on the ship, out of an abundance of caution.

The incident took place on Costa Diadema, the second ship to re-enter service on the Italian line in the COVID-19 era. The ship, which can handle 4,947 passengers during a normal sailing, had been chartered by a much smaller French tour operator for several consecutive cruises.

The first sailing, with more than 600 charter passengers onboard, left September 28 from Genoa. The 14-day itinerary visited other Italian ports and Greece before returning to Genoa.

When the ship re-entered Italian waters between October 8 and October 9, passengers were required by the government to retest for COVID-19. This is when seven positive cases -- all were asymptomatic -- were identified, the line said.

Per the ship's protocol, the passengers were isolated and immediately disembarked October 9 in Palermo in agreement with Italian Health Authorities, the line said. Contact tracing was put in place.

Once the ship offloaded the COVID-positive passengers, it continued back to Genoa, with stops in Cagliari in Sardinia and Civitavecchia outside Rome. "Both excursions programs were performed," the line said in a statement. "Please note that the protocols allow only organized, protected excursions. In both cases, health clearance was given by the public health authority."

When the ship returned October 12 to Genoa, the every crewmember took a PCR COVID test, as required by the office of Maritime Health of Genoa.

"Our ships have diagnostic equipment onboard, and the protocols prescribe testing for the crew in batches of 50 percent every two weeks to cover 100 percent every 30 days, with the possibility of increasing frequency if needed," according to Costa.

All of the crew came up negative, and the next French charter cruise was cleared to go.

Port stops were made as usual in Civitavecchia and Naples. On October 14, another case was developed becuase of contact tracing. The passenger was a "back to back" guest, who had been travelling on the first cruise. He disembarked in Naples and the ship was cleared by the Italian health authorities to resume.

On October 15, the line decided to stop the cruise and return to Genoa, mainly because of the health situation in France, where COVID-19 cases have spiked in recent days.

"Given the evolution in the epidemiological situation in France, Costa responsibly decided to anticipate the end of this second cruise, in order to allow a safe return home for the French passengers and to ensure the health of our crews and the communities we visit," the line said in a release.

"Costa supported all the guests for their safe return back home," the line said.

In light of the incident, Costa has decided to cancel a third planned charter cruise. Regular sailings on the line are all one-week cruises, as opposed to 14 days.

Recently, a Cruise Critic writer compared the protocols on Costa with those on MSC Cruises, another Italian line that has resumed service. Cruise Critic also interviewed the representatives from Costa about its first cruises back, and how passengers have responded positively to the changes.