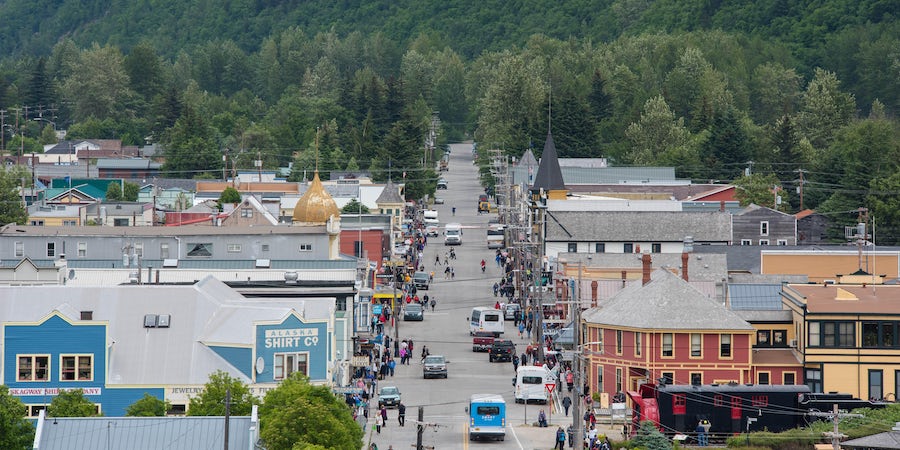 "This is About Survival:" Alaska Ports Issue Plea For 2021 Cruise Season

(5:15 p.m. EDT) -- After facing a devastating year that saw no cruise vessels call on ports in Alaska and British Columbia as a result of the global COVID-19 health pandemic, cities on the itineraries that rely on tourism say that having ships return in 2021 is crucial for their survival.

Andrew Cremata, borough mayor for the popular Alaskan cruise port of Skagway, Alaska, remarked on the current situation faced by his town, and numerous other port of call in Southeast Alaska, during a panel discussion at the Virtual Seatrade conference Wednesday morning.

"This is about survival for Skagway," said Cremata, who said that the cruise industry makes up as much as 95 percent fo the town's overall revenue. "It is essential for our small businesses that they are able to engage the cruise ship companies and the cruise ship passengers in a normal way. They local businesses are going to go 17 months in a best-case scenario without any revenue.

"April, May of 2021 represents the chance to right the ship."

The Alaska cruise industry has been plagued with massive job losses and severe economic effects as a result of both the U.S. Centers for Disease Control & Prevention's No-Sail order; and Transport Canada's current ban on cruise operations within Canadian waters.

Both orders are currently in effect through October 31, 2020.

For Cremata, the closure of the Canada-U.S. border has also further served to isolate his town. Skagway rests approximately 15 miles from the border with the Canadian province of British Columbia.

The Canada-U.S. border is currently closed to all non-essential travel until October 21. It is widely expected to stay shuttered through the end of the year.

"We are concerned about when that border will open," said Cremata. "Even if we saw a reduction in cruise ship capacity moving into 2021, that…will keep us alive."

Peter Xotta, vice president, planning and operations with the Vancouver Fraser Port Authority which manages the city's Canada Place cruise terminal, stated that the health and safety protocols being developed by the cruise lines, along with the dramatic impact on tourism dollars on the West Coast, will aid in easing restrictions.

He echoed concerns about the cross-border shutdown. "The opportunity, I think, is one where the cruise industry can define itself, within that broader context of tourism, as being the one that has a lower risk profile than some of the independent travel or others have."

Another challenge presenting itself for the 2021 Alaska cruise season revolves around the unique nature and geography of Alaskan cruising.

While the concept of "bubble" shore excursions that are pre-arranged and booked through the cruise line, and which do not allow for independent exploration, are the prescribed method of going ashore for the Mediterranean voyages that have restarted so far this year, Skagway Mayor Cremata expressed concern over what that would mean for his town.

"We want them to have a completely free experience while they're in the port of Skagway," he said. "We want them to be able to get off of the boat, hike on a trail, take a tour, visit a restaurant, shop at a retail outlet, do whatever they want to do.

"What we're doing now is working directly with CLIA (the Cruise Lines International Association) to develop a way to bring seasonal workers in safely. I am confident that we're going to see protocols develop that are very community-specific."

"We can't lose business owners," said Cremata. "When you have a population of under 1,000, that population dwindles quickly. Rebuilding that would take a very long time."

Additional Facilities Need to Be Agreed Upon For COVID

To date, Skagway is one of the few places to not have had a single case of COVID-19.

Cremata points out that while Juneau and Ketchikan have hospitals, Skagway does not. And that poses an issue for COVID-19 isolation, should an outbreak occur aboard a ship docked in port.

"It's essential that we work with the cruise ship companies to develop a facility here that can manage all of the different scenarios that could potentially take place when a cruise ship docks," said Cremata.

A similar situation is faced in many local communities in Alaska that lack adequate hospital care. Smaller communities will often have a clinic with basic care needs and the requirement to ferry residents, either by air or sea, to larger municipalities for more complex care.

Dedicated shoreside facilities for handling any possible COVID-19 positive cases would need to be established on-shore in these communities. Though Skagway is close to Juneau, it is a full overnight sail away from its medical facilities.

Throughout the discussion, Skagway's Cremata and Vancouver's Xotta expressed a desire to take the winter months to fully plan and prepare for the resumption of the 2021 Alaska cruise season.

The region has, however, already lost ships for next year: Cunard announced in August that it was pulling Queen Elizabeth from its scheduled Alaska sailings out of Vancouver for the season. Alaska and Vancouver lost a second ship when Princess Cruises unexpectedly sold its 1995-built Sun Princess, which was scheduled to cruise the region between May and August of next year.

Vancouver Fraser Port Authority's Xotta concludes that the onus now rests on ports and cruise lines to work with community and government stakeholders to ensure that the 2021 cruise season is allowed to proceed.

For Cremata, whatever it takes to resume cruise in 2021 will benefit his community.

"Whether you're a pro-masker or an anti-masker, it's irrelevant," Cremata concluded. "The only thing that's relevant is being ready when the cruise ships arrive.

"If that requires wearing 30 masks over our face before we engage the cruise ship passengers, I intend to be wearing 30 masks. I guarantee most everyone else in Skagway will be as well."