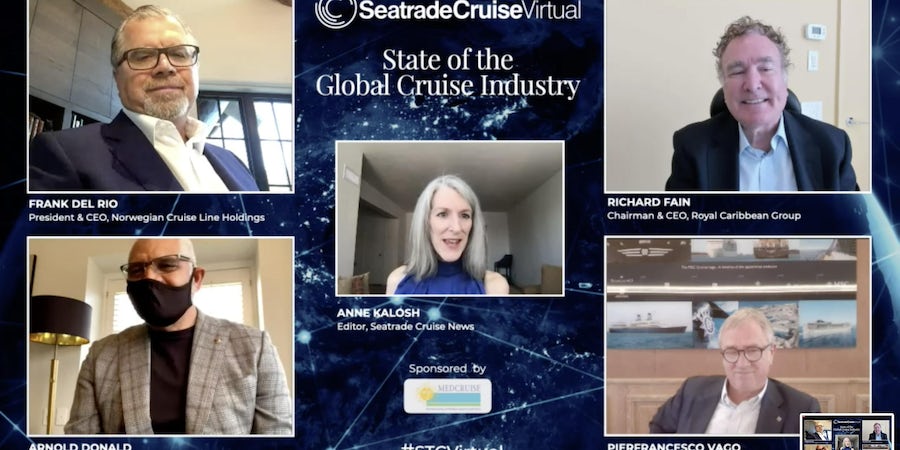 Cruise Executives Optimistic Cruises Can Restart from U.S. This Year

."This has been a safe and healthy industry. We hear about the virus onboard the ships because we're the only industry that has to report instances of disease onboard. Hotels don't have to do it, resorts don't have to do it, airlines don't have to do it. We do it. We think that makes us better operationally because we are transparent. By law we have to report it. And we are happy to do it."Jointly, all executives spoke at length how important a safe, measured restart of cruise operations is. Royal Caribbean committed to doing a series of test sailings first, with only employees and crew onboard, followed by a series of shorter voyages, to ensure the protocols created by the Healthy Sail Panel, which was spearheaded by Royal Caribbean Group and Norwegian Cruise Line Holdings, work as intended."I think we've all worked very collaboratively," noted Fain. "All of us have relied on experts and consulted with the leading figures in the medical field and public health. "Having a nice simple document the Healthy Sail Panel recommendations to work from has been constructive. It shows how much we've learned, how far we've come in six months. As Arnold Donald said, the fact that we've started up in Europe has been under very strict protocols. It has been done in cooperation with the governments there, and the CDC has been watching that."### "A Bump in the Road"Several executives noted that, while delayed, newbuilds are proceeding as planned. Bookings, even in an uncertain time marked by limited marketing and advertising spending, continue to be strong. Norwegian Cruise Line Holdings' Frank Del Rio noted that two of its brands -- Oceania and Regent -- have seen some of their strongest bookings ever. In the case of Regent, its 2023 World Cruise sold out just weeks after it was announced. This is an expensive, bucket-list voyage aboard a luxury operator that further speaks to the cruise industry's resilience. "We're seeing that cruising is going to come back strong," said Del Rio. "This is a bump in the road. We're going to come back smarter and in a way that puts health and safety even more at the forefront than it ever has before."