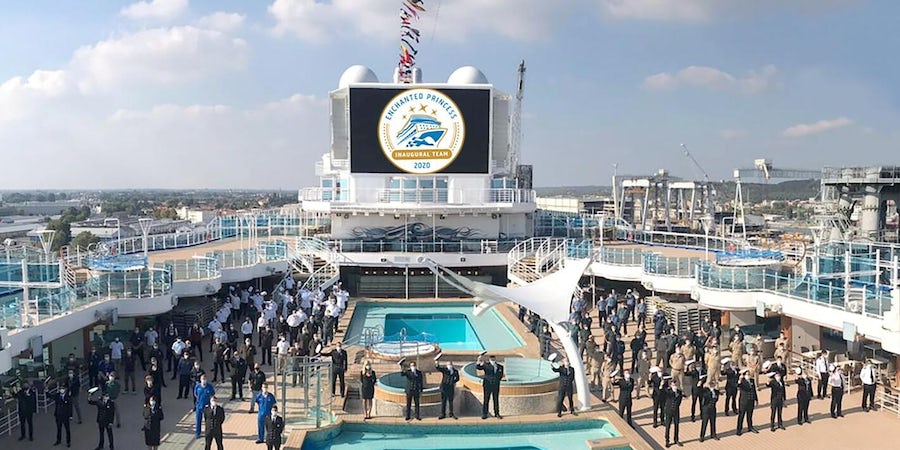 (4:25 p.m. EDT) -- In an unusual yet poignant ceremony with both in-person and virtual elements, Princess Cruises took delivery of its latest newbuild, Enchanted Princess, from the Fincantieri shipyard Wednesday.

The 3,660-passenger ship, which was originally scheduled to launch in June, is the fifth in Princess' Royal-class of ships. The ship has the line's Ocean Medallion technology built into it -- and even has a medallion welded into its keel.

The ceremony was livestreamed from Fincantieri's shipyard in Monfalcone, with feeds available at the company's seven other Italian outposts. Participants at all of the Italian shipyards were seen sitting in socially distanced arrangements, wearing masks.

Overcoming obstacles presented by the ongoing COVID-19 coronavirus pandemic was an underlying theme of the handover ceremony. Like most companies in Italy, the shipyard had been forced to shut down when the virus slammed the country in early 2020, closing for six weeks. Enchanted Princess is the first cruise ship completed by Fincantieri since the pandemic began.

Fincantieri Chief Executive Officer Giuseppe Bono spoke of the challenges it faced in constructing the ship, and also of the partnerships with the Italian government that allowed the shipyard to retool and reopen with safety practices for the pandemic era.

"We did everything that was necessary to do to save this industry," he said, speaking not just of cruising, but shipbuilding in general. "This sector employs millions of people. Nobody believed in what we wanted to do and we were proved right. We proved that we were ready to do the work that the country needs."

The launch of Enchanted Princess marks the 100th passenger cruise ship built by Fincantieri, another cause of celebration for the shipyard. The first vessel to debut was the original Crown Princess, built in 1990, with another 17 vessels built for the line by Fincantieri since.

In a nod to the importance and long tradition of shipbuilding in Italy, Prime Minister Giuseppe Comte also gave remarks remotely, from Rome. "This delivery ceremony confirms the enormous resilience and also confirmation of our support to the cruise sector," he said. "It is undoubtedly one of the industries that has suffered from the pandemic and will continue to suffer."

Arnold Donald, President and CEO of Carnival Corp., as well as Stein Kruse, who oversees the Princess brand as Group CEO, gave remarks virtually from the United States. Carnival Corp. owns more than 70 ships built at Fincantieri across its multi-line fleet and has invested more than 30 billion euros in shipbuilding at the yard over the past 30 years, Donald said.

Kruse focused on the challenges that the yard had to overcome to get back to work, with new practices to encourage physical distancing and safety. The streamlined sea trials run aboard Enchanted Princess in July were so effective that Kruse stated the company is going to adapt them as a model for future trials.

Wearing an Ocean Medallion necklace, Princess Cruises President Jan Swartz joined the ceremony from the line's California office. She praised the 6,000 people who brought the ship to life, and also promoted the new ship's captain, Nick Nash, to fleet Commodore.

Wrapping things up, Commodore Nash accepted a bottle of water taken from the first time that Enchanted Princess touched the sea.