You may also like
Dismiss
2019 Atlantic Hurricane Season Outlook: What Cruisers Need to Know
Maine Opens to Overnight Cruises, Negative COVID-19 Test Required
Norwegian, Royal Caribbean Team Up To Create Cruise Health and Safety Protocols
In Industry Step Forward, CDC Seeks Public Comment On Cruise Resumption
Rolling Out the Deals: Why Now Might Be a Great Time to Book a Cruise
CDC to Make Masks Mandatory in Cruise Terminals, Cruise Ships in the U.S.
Ships on the Move: Your Weekly Cruise Ship Round-Up
Royal Caribbean's Odyssey of The Seas Cruise Ship Officially Christened
Royal Caribbean Starts Construction On New Utopia Of The Seas Cruise Ship
A 'Thor: Love and Thunder' Cameo That Gets Cruise Fans Excited 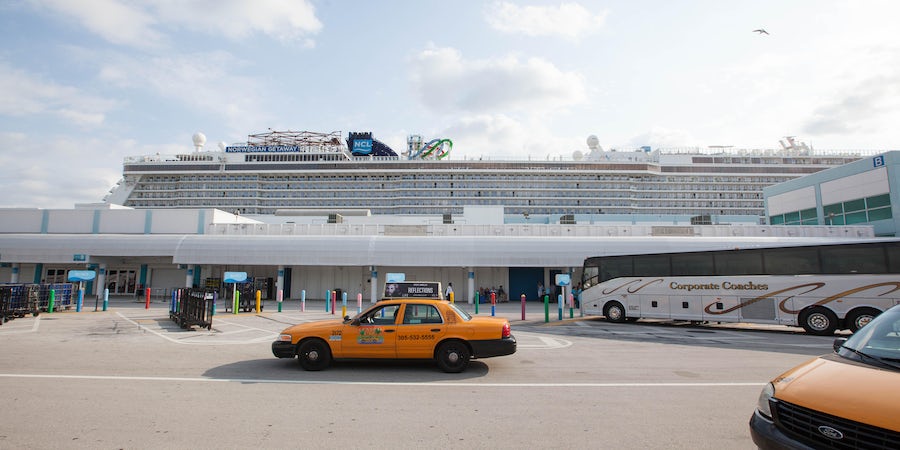 (4:30 p.m. EDT) -- A report issued by U.S. Federal Maritime Commissioner Louis E. Sola says there is an urgent need for the cruise industry to resume sailing from Florida's cruise ports, citing staggering losses to revenue, local employment and the contributions cruise passengers make to other tourism sectors such as the airline and hospitality industries.

, FMC Commissioner Sola indicates that Florida has lost $3.2 billion in economic activity and 49,500 local jobs paying approximately $2.3 billion in wages as a result of the suspension of cruising following the COVID-19 coronavirus pandemic and the U.S. Centers for Disease Control and Prevention's No-Sail Order, in effect through September 30.

The report notes that Florida is home to the top-three multiday cruise ports in the world, with 59 percent of all embarkations in the United States taking place there in 2018. Including the corporate and administrative staff of the cruise lines headquartered in Florida, the cruise industry was responsible for over 149,000 jobs in the state totalling $7.69 billion in wages.

The cruise industry resulted in $8.49 billion in direct spending each year within Florida.

"The interviews I have conducted with port directors, government officials and business leaders all confirm the importance of the cruise industry to Florida's economy and the urgent need for ships to start sailing again," Sola said. "The financial consequences of laid-up cruise ships are being seen in government coffers and the pockets of working men and women. Across Florida, people recognize the vital necessity of the cruise industry contributing to the economy again."

Losses for the 2020 cruise season have been staggering for some of Miami's largest turnaround ports.

Before the pandemic, PortMiami welcomed 6.8 million cruise passengers, a world record. As Florida's busiest cruise port, and one of the largest and busiest ports in the world, Port Miami is responsible for over 30,000 local jobs, $5.8 billion in economic value and $188 million in local and state taxes.

PortMiami estimates it will tally a $55-million loss this year.

Losses for Port Canaveral are pegged at 79 percent of its annual passengers and 16,000 individual jobs. With no cruises sailing from the port since early March, though, the annual $1.3 billion that is contributed to the local economy by the cruise industry in Port Canaveral and its surrounding area is at high risk.

Nearly 13,000 people were employed directly by the cruise industry in Port Canaveral in 2019, a number that rises to 23,745 if indirect jobs are included as well.

In Key West -- Florida's only cruise port to function solely as a port of call -- the cruise industry contributes over $85 million in economic benefits, provides 1,250 local jobs and makes up 15 percent of the city's total tax revenue.

Residents are trying to limit, restrict or even remove the cruise industry from Key West entirely.

Commissioner Sola's report points out that the suspension of the cruise industry within Florida alone has an impact on other industries within the United States. Cruise passengers contributed nearly $2 billion in fares to the airline industry in 2019. They also contributed $1.1 billion to the local economy in Miami-Dade County from related expenses like overnight hotel stays, food and beverage, shopping and transportation.

"It is not just large companies that benefit from the cruise industry," Sola said. "Cruise customers begin and end their voyages by using taxis, eating in restaurants, visiting museums, and shopping in local businesses.

"These are small- and medium-sized businesses; many are independently or family owned. The cessation of cruise operations can affect them as much, or more, as it does the companies that operate the ships or the ports where the vessels call."

The loss of the cruise industry cannot come back overnight, either. Many of the vessels that normally homeport in Florida for the winter cruise season are scattered around the world. Uncertainty surrounding the CDC's No-Sail Order, local port restrictions and CLIA's voluntary ban on cruises through October 31 have made it difficult for the industry to formulate solid plans to restart cruise within the United States.

"During the brief to DHS Acting Secretary Wolf on September 9, 2020, one cruise executive stressed that it was their desire that the Federal No Sail Order either expire as scheduled on September 30, 2020, or only be extended no more than 30 days," the report said. "Another cruise executive explained that the cruise industry will not automatically restart when the CDC's No Sail Order ends; time will be needed to reposition and resupply ships. Generally, participants agreed that the cruise industry needs to be restarted in a way that builds confidence among consumers."

"It is hoped that the data provided will not only draw attention to the importance of this issue but also encourage and assist other authorities in doing what is necessary to relaunch the cruise industry in a responsible and timely manner. As Fact Finding Officer, Commissioner Sola is exploring options to achieve this goal."

The report notes that the Fact Finding 30 commission will also be assessing the economic impact of the loss of the cruise industry in Alaska and the Northwestern United States next.