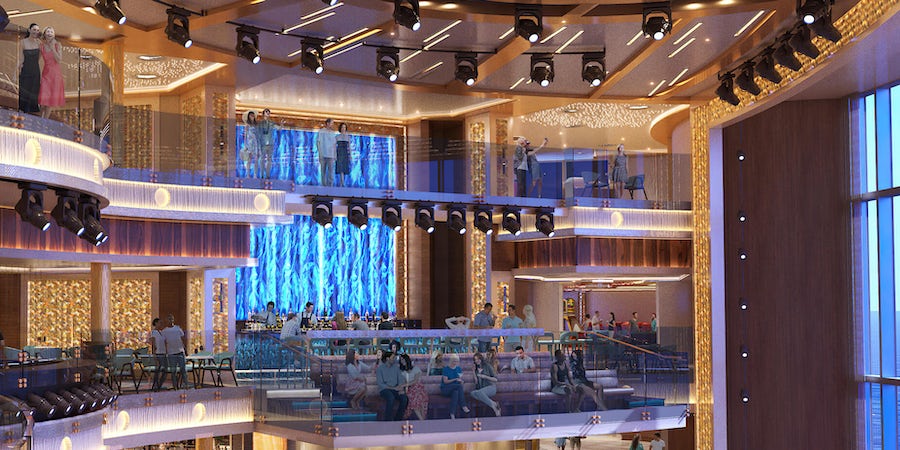 The three-deck high space will be one of six separate themed zones aboard the 5,200-passenger ship, which sets sail in February from Port Canaveral.

Flanked by 3,000-square-feet of glass windows situated on the starboard side of the ship, the Grand Central Atrium will span Decks 6, 7 and 8 , and has been designed to create an onboard space that functions as a relaxing spot for passengers to enjoy a coffee or drink by day and an immersive show lounge by night.

"It's entirely a departure from anything that we've ever done," Carnival director of newbuild product development Glenn Aprile told Cruise Critic in an interview. "As far as I know, I think this is the first atrium that's been placed on the side of a cruise ship. Most typically, Atriums run down the center of the ship.”

Get a Behind the Scenes Look at Carnival's New Fun Ship

In recent years, Carnival's atrium design has taken on a more intimate tone, functioning as the social hub for newbuilds like Carnival Vista and Carnival Horizon. This new Grand Central atrium concept will be the first atrium on a Fun Ship to offer such sweeping views of the sea and ports of call.

The space on Mardi Gras -- which reflects Carnival's new modern design and Caribbean-infused color palette and stylings -- will feature the multi-level Grand View Bar; the Center Stage Bar; the JavaBlue coffee bar; and the Cherry on Top sweets shop.

Bars will feature custom, hand-crafted cocktails inspired by the theme of each evening's entertainment, and lite bites will be offered at JavaBlue -- another first for the line.

"You have JavaBlue on the lower level that not only serves specialty coffees but also will be serving food," Aprile told Cruise Critic. "This is going to be a go-to place for people to have breakfast and lunch and a great alternative to the Lido. That's also by design. Guest dispersal was a major point of focus when master planning the ship."

In a first for the line, the Guest Services desk will no longer be situated on the deck that passengers embark from. Rather than being situated in the Grand Central Atrium, it is positioned further aft on Deck 8. This eliminates the troublesome lines that can interrupt passenger flow in the atrium as people queue at Guest Services.

"It really reinvented what the atrium is all about," said Aprile. "To me, this is more than just a space for circulation of passengers. It's a space that is multi-functional, and completely transformational."

By evening, the new Grand Central Atrium will host new entertainment performances that still have yet to be revealed by Carnival. Performers will interact with 16 individually controlled LED screens that are 14-feet wide and stand six feet tall, which can display standalone imagery or be combined to create a massive digital canvas. Laser and aerial performances will round out the specialty entertainment.

"It certainly raised a lot of eyebrows when we first mentioned that we wanted to do it," said Aprile. "It's completely unconventional. Shipyards are very experienced at engineering and creating openings in the center of the ship. When you want to take that opening and move it to the side of the ship, it really requires the engineers at the shipyard to rethink how they view the entire structure.

"Taking it a step further, not only do we want the atrium to be on the side of the ship, but we want to remove nearly all of the pillars so that we can have the best possible sightlines for the evening entertainment."

Carnival's new Mardi Gras is scheduled to debut on February 6, 2021, operating sailings to the Bahamas and Caribbean from Port Canaveral (Orlando). It will become the first cruise ship in North America to be powered by clean-burning Liquefied Natural Gas (LNG).

"The ship is going to be spectacular overall," said Aprile. "I think this Grand Central is a good indication of how much thought has gone into the development of the guest experience on this ship."