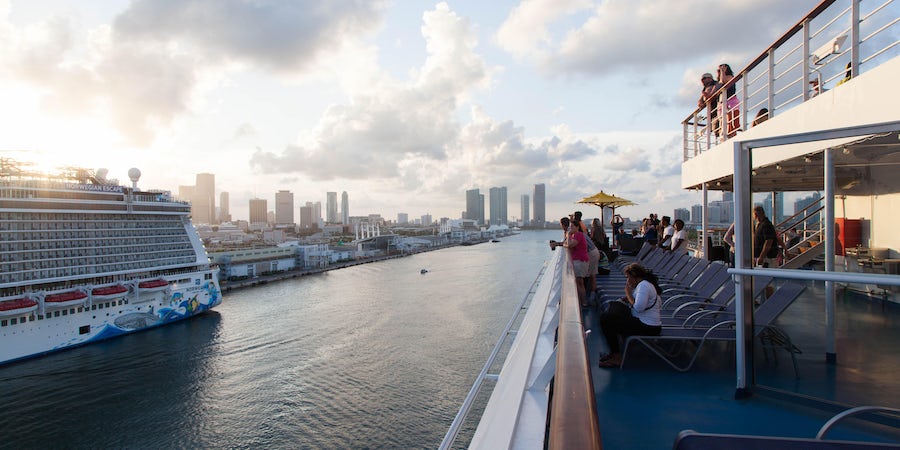 (2 p.m. EDT) -- Cruise Lines International Association (CLIA) member lines stated Monday that they are ready to resume sailings and could be up and running in as little as 30 days.

The news comes on the same day that Royal Caribbean Group and Norwegian Cruise Line Holdings' joint Healthy Sail Panel submitted their formal recommendations to the U.S. Centers for Disease Control and Prevention (CDC). Today is also the last day for the public to comment to the CDC on the safe resumption of cruise.

"This is a very auspicious day in terms of the effort that the cruise sector, with all of its supporters in its ecosystem, have put in to get to this moment where …we are in a position to announce the mandatory core elements of health protocols that we see as a path to the phased resumption of oceangoing cruise operations in the Americas," said CLIA's Goldstein.

The new health and safety measures submitted to the CDC include mandatory COVID-19 testing for all passengers and crew; mandatory usage of masks by all passengers and crew onboard and during shore excursions; physical distancing in terminals, onboard, on private islands and shore excursions; increased medical capabilities and preventative measures onboard, including dedicated cabins for isolation; enhanced ventilation onboard; and the requirement that passengers wishing to go ashore do so only on cruise line-sponsored excursions.

Donald said the report was informed by the protocols already in place in Europe, where three cruise lines, including Costa Cruises, which is part of Carnival Corp., and MSC Cruises, have already restarted successfully:

"We're on a path to restart cruising in the U.S.," Donald added.

When asked if cruising could resume now, Norwegian Cruise Line CEO Frank Del Rio stated they would be ready to do so.

"Absolutely," said Del Rio. "We have great confidence in the comprehensive and layered approach our health and safety panel has put forward….that's why we're going to have a phased approach, we're going to test it, we're going to make adjustments along the way…so that we can get back to what we do best."

Currently, the CDC's No-Sail Order is valid until September 30. All CLIA member lines have voluntarily suspended their sailings through October 31, 2020.

Throughout the conference call, executives repeatedly stressed that a phased approach to the resumption of cruise would be the way forward.

"We foresee a phased, sequential startup of operations," said CLIA's Goldstein. "We are confident we can operate ships safely and deliver fantastic vacations."

Several executives hinted that the ramp-up time needed to restart ships would be in the range of 30 days from being given the green light.

"We have to fly crew back in, they have to go through rigorous testing, it takes about 30 days," said Carnival's Donald.

While nothing has been formally announced, a 30-day restart window could potentially allow cruise lines to resume limited sailings by November 1, provided the CDC agreed with that timeline. The thirty-days marker was, at one point, mentioned so frequently that it appeared as if planning were already in the works for such an event.

"I look forward to welcoming you all aboard our early cruise," said Royal Caribbean's Fain. "I'll be there to welcome you, and hope you'll join us."

That echoed comments made by Norwegian's Frank Del Rio, who stated broadly that some of the first voyages Norwegian embarks on may be test runs with company employees only.

"It does take time to stand up a ship," said Del Rio about the restart process. "We need to get the crew back, we need to train the crew, and that's why we're talking about a phased approach.

"We're talking about getting only our employees onboard, maybe only a day or two at sea, and gradually work ourselves up to the point where we can resume more normal operations over time."

Each of the executives present on the call stated that demand was there to restart cruise within the Americas, but each emphasized the need to do so in a safe and measured way.

"What I can tell you is there's general momentum building broadly for an appropriate, healthy restart of cruising," said Donald. "As Frank Del Rio pointed out, none of us want to start before we're ready and what Royal Caribbean has put forward, what MSC's panel has suggested in Europe…suggests that we should be in a position as things continue to mitigate that support in the U.S."

"Today's announcement, and all the thinking and learning that went into today's announcement, put us in a better position to have an engaged dialogue with all of our regulators," said Brian Salerno, SVP maritime policy with CLIA. " We'd like to salvage some of the 2020 season."

Donald pointed out that many of these new health and safety policies are easy to adopt. Others, like testing, are more difficult: "Physical distancing and mask wearing is pretty easy to do. Some of the more difficult things are…testing of every guest."

CLIA CEO Adam Goldstein pointed out the cruise industry is the only travel-related sector that has fully committed to testing all passengers and crew for COVID-19 as a condition of sailing.

With the industry's health and safety protocols submitted to the CDC, the onus is now on that organization to issue directives to the cruise industry that would allow them to resume sailings from and to U.S. ports of call.

With the CDC's current No-Sail Order stretching to the end of this month, and CLIA's own ordinance lasting through October 31, no cruises will likely happen before then. Many lines have also cancelled well into 2021.

There is, however, the hope that some sailings for November and December could be salvaged.