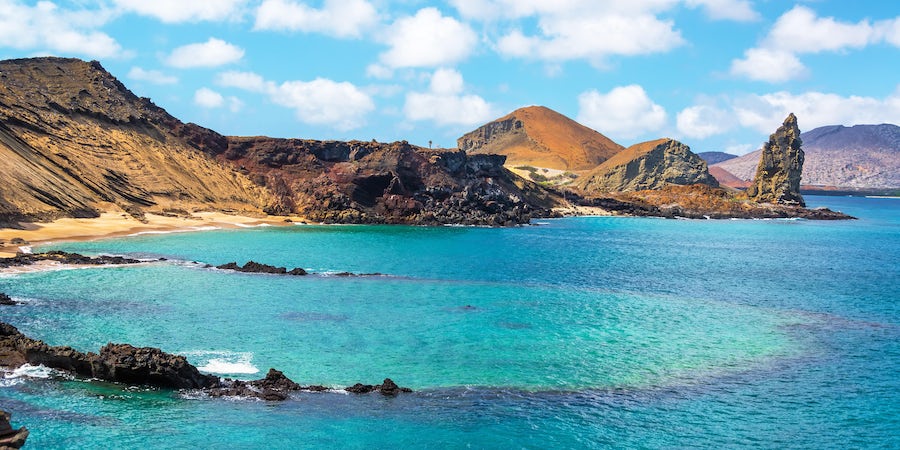 View of an Underwater Crater in the Foreground with Pinnacle Rock in the Background, on Bartolome Island in the Galapagos Islands (Photo: Jess Kraft/Shutterstock)

'So Far from Mass Tourism': How the Galapagos Islands Could Help Restart Cruises

View of an Underwater Crater in the Foreground with Pinnacle Rock in the Background, on Bartolome Island in the Galapagos Islands (Photo: Jess Kraft/Shutterstock)

(1:55 p.m. EDT) -- As the cruise and travel industry works to regain its footing while the COVID-19 coronavirus pandemic continues its global march, limited cruises quietly restarted in the Galapagos Islands in August. This remote, bucket-list destination could very well provide a framework for cruises to restart in other parts of the world.

Located roughly 621 miles (1,000 kilometers) off the Pacific coast of Ecuador, the Galapagos is no stranger to cruise tourism. Roughly 70 ships ply these waters on a regular basis, serving as the easiest and most direct way to experience some of the 19 islands that make up the collective known as the Galapagos.

These ships, though, are mostly small vessels carrying fewer than 50 passengers. Only a handful of ships are certified to carry 100 passengers, the maximum allowable under Galapagos regulations.

Like most expeditions, access to shore is tightly regulated. Only small groups can be ashore at any given time, and ships can only visit one landing site every two weeks, with the exception of the island of Santa Cruz, home to the Charles Darwin Research Station.

Access by air is already tightly controlled, with air service operating to either Baltra or San Cristobal from Guayaquil on the mainland. Luggage is sprayed and scanned for invasive species. Access control cards are given to passengers. Tourism is a well-oiled machine dedicated as much to preserving the endemic species of these islands as it is to preserve the local economy.

Yet it is these very regulations that are priming the Galapagos as a key candidate to restart its cruise industry in a meaningful way.

One company has already quietly restarted its operations in the Galapagos. Ecuadorian-based Metropolitan Touring resumed its first post-shutdown operations aboard the 48-passenger La Pinta on August 2, 2020 and has committed to operating every sailing -- even if only one passenger is onboard.

"We were pretty much the only ones,"  Klaus Fielsch, product manager with Metropolitan Touring, told Cruise Critic. "We only took six guests on a ship that is designed for 48."

Fielsch noted that being located so far away from a major air hub was initially a problem. To reach the Galapagos, most travelers have to fly into Quito or Guayaquil, overnight in a hotel, then journey on the next day aboard commercial or chartered flights to the Galapagos Islands.

"The airlines had several trips to the Galapagos bringing back local residents to the islands," he said.  "They had already lost a lot of money. We sensed a bit of possible hesitation restarting flights to the Galapagos, but if we don't have flights, we don't have guests. We told the airlines, 'If we're going to move our ships, you need to move your planes.' We have a great relationship with them."

When the pandemic struck Ecuador in March, many local Galapagos residents were trapped on the mainland. To keep the local population on the islands healthy, airlines were forced to experiment with policies and procedures ahead of time, on the fly, to repatriate over 3,000 local islanders.

"The airlines, when we opened for tourism, knew what they were doing," Fielsch said. "The airlines and airports started rehearsing protocols with real passengers -- all those Galapagueños local island residents-- and it worked.

"When I flew last week between Quito and Guayaquil, it was so smooth. You go through heat-sensing cameras; the staff are very polite, very professional. The planes and the airports are absolutely flawless."

Of Metropolitan Touring's three vessels, only one -- La Pinta -- is currently operating. However, the line plans to increase that to two vessels if demand increases in October and hopes to be operating all three ships -- La Pinta, Isabella II and Santa Cruz II -- by December.

Mask wearing is essential onboard and ashore, in keeping with Ecuadorian laws. Passengers go ashore in small groups and, on sailings with more passengers, additional mealtimes are offered, and excursions reworked to accommodate multiple dining times.

"Breakfast was my concern," Fielsch said, noting there were concerns the ship's galley could be overrun by the new menu-driven ordering system that was introduced in place of the standard breakfast buffet.

To keep things manageable and encourage social distancing, Metropolitan introduced two seatings for mealtimes, including breakfast. While one group was on-shore exploring, the other group ate. At a certain point, they switched: the breakfast group went ashore, while the early-morning group came back to eat.

"It went really smoothly," Fielsch said. "And nobody complained about the meals being all a la carte."

In addition, Metropolitan Touring began offering more causal meals taken out on deck, with the more formal dining experience being offered indoors. That, too, has helped passengers social distance while still having plenty of onboard choice.

Menus and ship information are all available digitally though the use of QR codes. Passengers even can use their smartphones to book time in the La Pinta's onboard Jacuzzi, with up-to-the-minute information showing what timeslots are available.

Fielsch was quick to point out that of the entire Galapagos fleet, only nine vessels have an onboard doctor, including La Pinta. This is turning out to be a huge win for Metropolitan Touring, with the onboard physician overseeing the health and safety protocols onboard.

"Our medical doctor even supervises the cleaning of the snorkeling gear and wetsuits," said Fielsch, adding that even the mouthpiece on each snorkeling mask is a brand-new one that passengers can take home with them.

Ecuador is one of the few countries currently open to all international travelers who are legally able to fly there. Land border crossings continue to be closed.

Commercial flights resumed into Ecuador on June 1, and the Galapagos re-opened to limited tourism July 1. Currently, Americans, Canadians and British travelers can visit the Galapagos, though local quarantine measures can be imposed upon passengers returning to their own countries. Australian citizens are technically allowed to enter Ecuador but are currently unable to leave their own country due to quarantine measures.

Due to the time involved in reaching the Galapagos Islands, it could be necessary to take an additional COVID-PCR test while in Ecuador, but before arrival in the Galapagos, depending on flight arrangements.

Passengers must fill out a health declaration before arrival to Ecuador, and they must wear masks nationwide in all public spaces -- both indoors and outdoors.

Other Operators Not Restarting Yet

Some of the most well-known operators among North American and European passengers in the Galapagos Islands have not yet restarted operations. Celebrity Cruises, Lindblad Expeditions and Silversea all maintain a presence in the Galapagos but have yet to resume sailings.

While the U.S. CDC "No-Sail" ruling doesn't apply to vessels operating in the Galapagos, one of the largest obstacles at the moment to return to service is lack of air support. Only one European flight currently visits Guayaquil daily (KLM from Amsterdam), though some flights arrive on Copa Airlines via Panama City and on American Airlines from Miami and United from Houston-Intercontinental.

Metropolitan's work, though, helps pave the way for other smaller operators to begin sailings in advance of the larger expedition vessels in the Galapagos.

"It's so far from mass tourism," Metropolitan's Fielsch said, noting that if every vessel in the Galapagos was filled immediately to capacity, it would account for just under 1,700 people -- less than half the capacity of a single modern Carnival or Royal Caribbean vessel.

Fielsch believes the tourism industry plays a valuable role in preserving the unique ecosystem of the islands. Much of the tourist fleet reports on illegal fishing activities and other possible threats, while the income from tourism provides much-needed economic activity for the islands' 25,000 residents.

"Tourism is what has made Galapagos not extinct," he said.