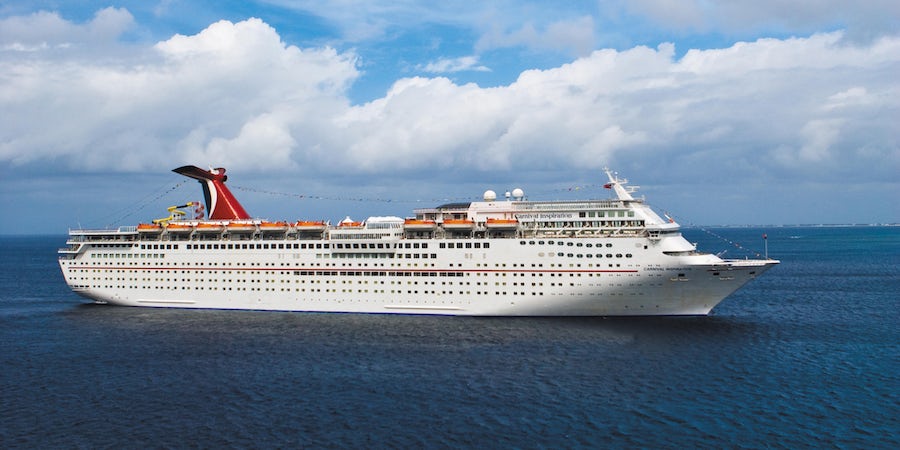 (12:45 p.m. EDT) -- Fans of older cruise ships should prepare themselves, as Carnival Corporation & plc  will be shedding more cruise ships from its collective fleet in the coming months.

The announcement, made in a preliminary Q3 financial filing to the SEC, brings the total number of sold ships from the global cruise company to 18.

In the filing, Carnival Corp. CEO Arnold Donald said the action was being taken to make the company's fleet -- and company overall -- more efficient.

"We continue to take aggressive action to emerge a leaner, more efficient company," he said in the filing. "We are accelerating the exit of 18 less-efficient ships from our fleet. This will generate a 12 percent reduction in capacity and a structurally lower cost base, while retaining the most cash-generative assets in our portfolio."

So far, ships that have been sold for scrap include several of Carnival Cruise Line's oldest ships -- its Fantasy-class, including Fantasy, Fascination, Imagination and Inspiration, along with Costa Victoria. (Cruise Critic is keeping a running tally.)

The filing also changed the company's third-quarter adjusted net loss to $1.7 billion. The company is ending the quarter with $8.2 billion in cash and cash equivalents.

On the positive side, Donald noted that Costa has resumed sailing seven-day cruises in Italy. AIDA will also follow in the fall.

"Our business relies solely on leisure travel, which we believe has historically proven to be far more resilient than business travel and cannot be easily replaced with video conferencing and other means of technology. Our portfolio includes many regional brands, which clearly position us well for a staggered return to service in the current environment," he said.

The company also provided a booking update, noting that cruises in the second half of 2021 that are on sale are at the higher end, pricewise, of the historical range, and similar to where bookings were in 2018 for the second half of 2019. "The company believes this demonstrates the long-term potential demand for cruising," he said.

Carnival reiterated its policy of offering guests on canceled cruises a choice of a refund or a 125 percent Future Cruise Credit. As of August 31, 55 percent of the booked passengers had requested refunds, while 45 percent chose the FCC option. About 55 percent of the bookings taken during the quarter ending August 31 were new bookings, as opposed to FCC rebookings, the company said -- "despite minimal advertising or marketing."

As SEC documents usually do, the company put forward a positive outlook, despite the COVID-19 challenges and uncertainty surrounding U.S. cruising.

"With two-thirds of our guests repeat cruisers each year, we believe the reduction in capacity leaves us well positioned to take advantage of the proven resiliency of, and the pent up demand for cruise travel -- as evidenced by our being at the higher end of historical booking curves for the second half of 2021," Donald said.

"We will emerge with a more efficient fleet, with a stretched out newbuild order book and having paused new ship orders, leaving us with no deliveries in 2024 and only one delivery in 2025, allowing us to pay down debt and create increasing value for our shareholders."