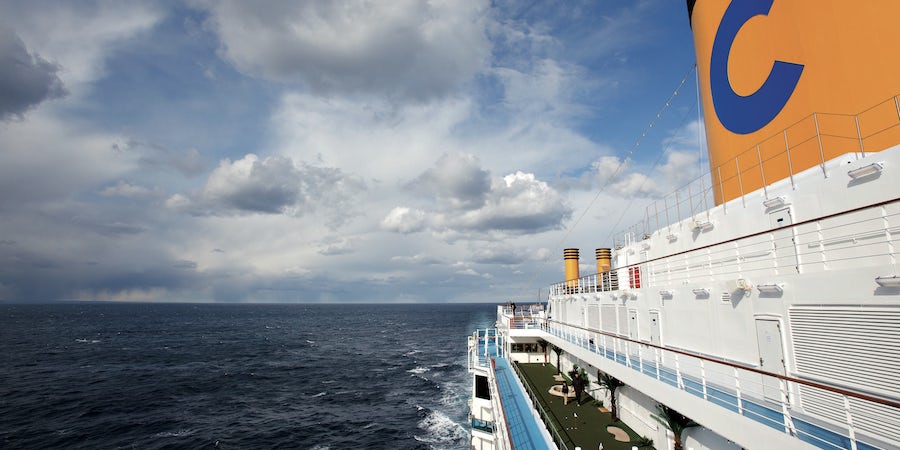 (10:55 a.m. EDT) -- With one cruise already successfully complete and a second underway, Costa Cruises is proving that big ships can get back out on the water without a COVID-19 outbreak, thanks to strict health and safety protocols.

The Italian line follows MSC Cruises, which also began sailing in Italy last month. Currently, one ship, Costa Deliziosa, is sailing, with a second, Costa Diadema , to begin September 19. Only Italian nationals are on the first cruises, with the sailings to open to more nationalities at the end of September. The line is the first of Carnival Corporation's brands to resume sailing since the COVID-19 pandemic began.

Cruise Critic caught up with Guiseppe Carino, Costa's vice president of guest services, to hear how the first sailings are going -- and what lessons are being learned for the future.

Returning to the Seas

Getting the ship ready to go with its new sailing protocols has been a process that has taken months of effort, Carino said. But the hard work was worth it when the ship departed Trieste.

"The horn blew three times when we left the port," Carino said. "Everyone onboard was crying. Everyone -- the crew, guests, our staff, corporate people. Everyone was ecstatic about being able to cruise again."

That first sailing only had 500 passengers on it, about 25 percent of the ship's 2,260 passenger capacity. "This was a conscious decision to start low, because we needed to bring the ship back into operation after six months of being stopped, with a completely different environment," Carino said.

The line plans to ramp up capacity as different nationalities are allowed onboard. "We will see over the next months if we are able to get to 60 or 70 percent," he said.

One of the aspects of Costa's return, similar to what MSC Cruises does, is that all passengers must take an antigen COVID-19 swab test in the terminal before boarding. People who test positive then take a second molecular test, just to make sure there's not a false positive, before boarding.

The procedure is the same in all embarkation terminals on the weeklong cruise, Carino said -- Trieste, Bari and Catania.

The line has had two instances where passengers tested positive on the antigen tests, one on the first cruise and another on the second. Both passengers tested negative on the molecular PCR swab and were allowed to board. "All this information was shared with the authorities and all testing was performed with them," Carino said.

The ship is also taking temperatures in the terminal. The line had a passenger who presented with a high temperature when leaving the ship in Trieste, Carino said. She was examined by a doctor and given a PCR COVID-19 test. Once she tested negative, she was allowed to leave the ship and go back home.

"So this is just the full range of situations that we had to face in these first groups," he said.

If passengers test positive, they do receive a refund, Carino said, but what happens to them depends primarily on the shoreside authorities. "Normally if they are symptomatic, they are directed to a hospital," he said. "If they are asymptomatic, they can be set into a shore side facility ... we have contracted with a number of structures throughout Italy to manage these situations."

While the testing program does give passengers an extra layer of security, Carino is quick to say that it's not the only thing. "We don't want to give a false sense of safety," he said. "Testing is one component. You have to physically distance, you have to use your face mask, you have to apply personal hygiene measures. It's a combination of all the three."

Masks -- And Their Enforcement

Face masks are required on the ship in all indoor public areas, Carino said -- and he has directed crew to be strict in enforcement.

"We are very picky on the use of the face mask because it's really something that has proven to be really successful into reducing the virus spread in a confined space," he said.

The three exceptions to face mask use are when passengers are seated at a bar or restaurant (all of which have had seating recalibrated to allow distancing), when they are exercising in the gym and when they are on the outside decks and able to be away from other people.

"What we have observed is that guests are generally using the face mask," Carino said. "They do need to be reminded from time to time to cover their nose."

Reminding passengers to wear the mask properly is something that all staff and crew have been instructed to do, Carino said. "I've done it myself," he said, adding that it has been a cultural change for many crew who are not used to correcting passenger behavior in this way.

"It takes some time to convince our crew colleagues not to be shy, but it's better to be safe than sorry," Carino said. Most people simply apologize and put the mask on correctly, he said.

And if a passenger gets angry or confrontational? "If they insist on having a negative attitude or if they become aggressive, then their cruise would stop. End of story.

"I tend to be very protective of our crew onboard in normal situations. ... Now I'm hyper-protective of them because it's become a matter of public health. I want our crew to be really strict."

The line will be making some adjustments after the first cruise, mostly to improve some pain points that passeners encountered, Carino said.

First, the ship-sponsored shore excursions, which passengers are required to take if they want to leave the vessel while in port. While 80 percent to 85 percent of the passengers signed up to take an excursion, many people wanted more time at shops to buy souvenirs, Carino said.

The line is looking into ways that it can work with stores to make sure people can have their shopping time, while still remaining safe and not being exposed to those "outside the bubble," he said. "Maybe we close the shop for 30 minutes so we have exclusive access to these locations," he said.

Second, the line would like to work closer with travel agents and improve communication so passengers know exactly what the changes will look like before they board, Carino said.

On the first sailing, many passengers did not know the line was using a QR code instead of printed menus at the restaurants, he said. The code requires passengers to use their smartphones.

"This is something new, and we have to explain it to the network of private agents," he said.

And the line has also done away with the traditional guest services desk, making customer service a process that is being done over the phone, rather than in person. "This requires a little bit of adjustment in the habits of our guests, and these messages need to be conveyed to the public," he said. The line plans to tweak the phone system to make the experience better.

Another of Carnival's international lines, AIDA, plans to start cruising from Germany in November; executives with the German cruise line are coming onboard next week to learn from Costa's experiences, Carino said. The line has also been in close contact with Carnival Corporation during the restart, he said.

But the best feedback has been from the passengers themselves, Carino said.

"They say that before coming on board, they were a little frightened and scared, but once they have experienced how solid the controls are in the full experience, they have enjoyed the ship," he said. "They've enjoyed the larger spaces, the quiet atmosphere onboard. … We are enjoying fantastic weather at this time of year in Italy.

"So I've had positive feedback from our guests. From what I see, the guests are very happy."