You may also like
Dismiss
Live From SeaDream Yacht Club: Six Reasons Why a Luxury Cruise Is Perfect For Thanksgiving
Exclusive Q&A: Ben Bouldin, Head of Royal Caribbean Cruise Line in the UK
Can a River Cruise Still be Fun in the Age of Covid-19?
Live From CroisiEurope: The First River Cruise Line to Resume Sailings With a Multi-National Passenger Mix Onboard
TUI River Cruises Confirms Launch Date, Itineraries, Safety Protocols
Two UK Cruise Lines First to Restart Cruising in the UK
Live From SeaDream: What It's Like To Be a Passenger On the Only Transatlantic Cruise Sailing
Live From Viking Venus: Sailing On The Line's Newest Cruise Ship
Live from Viking Sky in Iceland: What Is It Like Onboard?
Live From Marella Discovery in the Aegean: What It's Like Onboard One of the First UK Cruise Ships Sailing Internationally 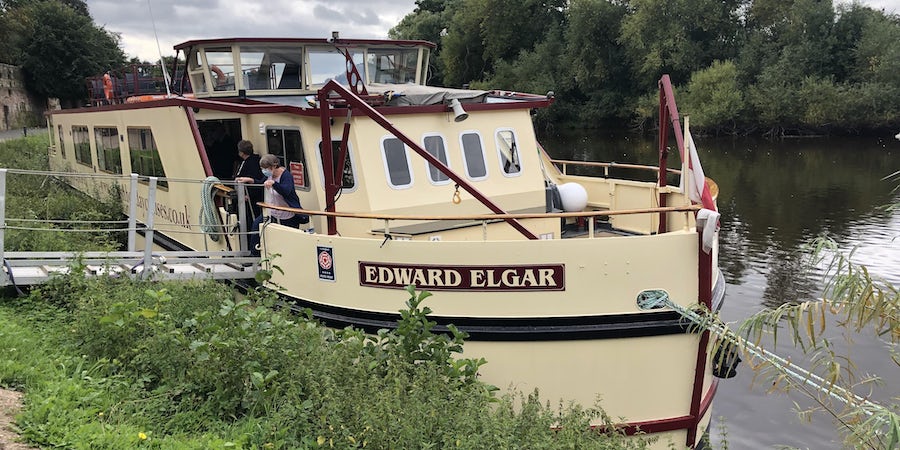 The horizons for British river cruise fans are extremely narrow at the moment, especially for those who want to avoid quarantine on return from European countries. Realistically, there’s just a handful of possibilities left for this season.

But what about a staycation river cruise? Gloucester-based English Holiday Cruises was ready to go on August 10, the four-star MV Edward Elgar sporting a VisitEngland ‘We’re good to go’ sticker, which means it’s met all the Covid-19 protocols set by the national tourist board.

The 22-passenger ship, England’s biggest hotel boat, plies the Severn, Britain’s longest river, and the Gloucester and Sharpness Canal, offering cruises of two, three, four, five and six nights, with the last departure of this season on October 29. I’ve joined the six-night ‘Severn Wonders’ voyage to get a flavour of river cruising with a quintessentially English flavour.

I’ve done three cruises since lockdown eased, one in Greece, one in Germany and this one, and the protocols on Edward Elgar are the most thorough. Cruises begin with a temperature check and health questionnaire on the quayside in Gloucester – and after that, our temperatures are taken at breakfast every day.

Normally, you’d eat at communal tables after a few drinks in the bar. Now, tables are spaced out according to travel ‘bubbles’ with an almost floor-to-ceiling plastic divider between each table. Six is the largest group size allowed; it has been the limit anyway since August 10 but now falls in line with the government’s new protocols.

Because of this new table arrangement, the bar is taken up with two dining tables so is for now, effectively, an extension of the dining area. Everything you do in this public space – reading, eating, enjoying a cocktail – takes place in your own little booth. A flask of hot water for tea, drinking water, tea bags and milk are always available in each booth.

Each table has a tray to one side, where you place used crockery, so the waiter doesn’t have to lean over anybody. Inside your booth, you can take off your mask but it has to be worn while walking around the ship. It’s a strange feeling, greeting neighbours through a screen, but you get used to it.

There are hand sanitiser dispensers dotted around, single-use menus for the whole cruise, laminated sheets with excursion information and a one-way system marked with arrows on the carpet. On the upper deck, which is open to the elements, masks aren’t required.

All 11 cabins are on the lower deck and are all the same. They’re compact, with fixed beds in an L shape, but are actually very comfortable. There’s more hand sanitiser in each cabin and a pack of masks and in the bathroom, cleaning wipes.

Passengers have to opt in to having their cabin cleaned, the idea being to minimise the number of people entering each room. If you go for the DIY approach and want clean towels, you fill in a form, put the used ones in a basket in the corridor and replacements arrive, plastic-wrapped.

The voyage along the Severn is hypnotically serene, the countryside soft and gentle, with stops to explore stately cathedral towns like Gloucester and Worcester.

We’ve been sitting on the upper deck in the early autumn sunshine, drifting along under big skies, watching herons fishing, buzzards perched in trees and turquoise dragonflies flitting over the deck.

In the distance, the 12-mile spine of the Malvern hills looms, while farmyard smells waft over the deck every now and then as we pass fields where sheep graze.

Most days are spent sailing, then stopping at some beauty spot for a tour. In historic Worcester, for example, we did a socially distanced tour of the almost empty cathedral, where there’s a memorial plaque to composer Edward Elgar, the ship’s namesake, who lived in the area.

The next day, from Stourport, we visited Witley Court, a ruined Italianate mansion with dazzling gardens and fountains. Other trips include a walking tour of Upton-upon-Severn and a visit to the Slimbridge Wildfowl Trust.

Most attractions in the region are open but with advance booking only. As entrance fees and guides are included in the cruise fare, the crew handle all the bookings and provide the track-and-trace information required by each venue.

The food is excellent, described by the chef, Miles, whose background includes several Michelin-starred restaurants, as ‘traditional British’. There’s more than a hint of nostalgia, with dishes like prawn cocktail, prosciutto-wrapped melon, apple pie and custard, sherry trifle and posh fish and chips, all elegantly presented and using all locally sourced and sustainable ingredients.

There’s no buffet, of course; in normal times, dishes might be served family style but now, it’s individual plated portions only. Decent wines are generously poured with meals.

In a normal world, around 10 per cent of the passengers on English Holiday Cruises are from the US, Canada, Australia and mainland Europe. Most are over 65 and most are couples. My cruise is different and everybody is from the UK, with some trying this in the absence of their usual Saga or Viking cruises.

“We’ve never cruised in England before,” one couple from Surrey told me. “We were interested to see how it would work, with the Covid precautions, but they’ve managed it really well.”

There’s a jolly atmosphere, encouraged by Captain Steve’s stream of gossip, dry humour and leadership skills; his crew of four are professional and enthusiastic, a couple of them coming from top hospitality positions in the ski business, which is reflected in the high standards of service.

Entertainment is low key, with background cocktail tunes from a local pianist one day and a jazz duo on another evening. Sometimes, people stroll ashore after dinner if we’re moored next to a pub.

Simply watching the river, reading and eating is enough for most on this wonderfully gentle cruise.