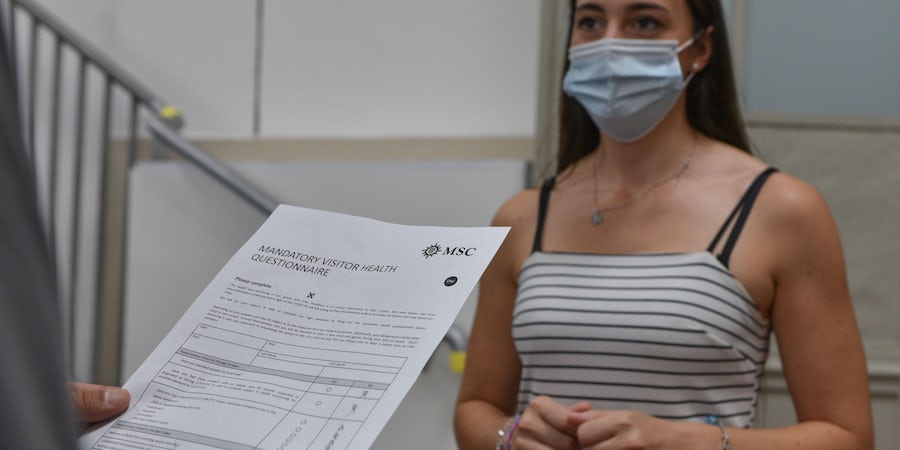 (3:05 p.m. EDT) -- Cruise Critic readers would like to see a wide range of health and safety measures implemented in ports to guard against COVID-19 once cruising resumes, a readership survey found.

The survey, which received over 7,000 responses from Cruise Critic readers, asked people a series of questions about what they liked to do in port before the COVID-19 pandemic -- and what they'd like to see the cruise lines do to make shore stops safe in the future.

Among the new procedures that a majority of respondents wanted to see when returning to the ship: mandatory hand sanitization (74 percent); temperature checks (69 percent); mandatory mask wearing (69 percent); and rapid COVID-19 testing (56 percent). Respondents were allowed to mark off more than one choice.

The survey also found that readers aren't quite sure on whether they'd limit their time in port to a ship-sponsored excursion, if that was the only way to cruise and stay safe from COVID-19. It's a measure that has already been implemented by cruise lines that have returned to service in Europe, including MSC Cruises and Costa Cruises.

In the survey, 43 percent of respondents said they would take a ship-sponsored excursion if that was the only way to leave the vessel. Twenty-nine percent said no and 28 percent were unsure.

Another question asked Cruise Critic readers what would make them most comfortable getting off a ship in port. Knowing that there were minimal COVID-19 cases in the area received the most votes (67 percent), followed by strict protocols for leaving and returning to the ship (63 percent). A full 60 percent said they'd feel most comfortable knowing there was a COVID-19 vaccine.

Even with COVID-19, most cruisers -- 59 percent -- said they planned to disembark in port when cruising resumes. Factors involved in the decision will be foremost whether they've been to the port before and liked it (68 percent), followed by the attractions and entertainment available in the port (63 percent). A majority of people said that COVID-19 would be on their mind, however, with 59 percent saying they would consider how strict the protocols were to get on and off the ship, and 53 percent wanting to know the number of COVID-19 cases in the area.

Guided tours of some sort are the prime activity that Cruise Critic readers like to do in port, with 73 percent saying that they usually took them. Another 69 percent said they liked to visit independent attractions like museums or boat tours, while 66 percent liked to shop. A little over half of the respondents answered that they liked to go to local restaurants or bars while in port.

Finally, 41 percent of respondents are watching to see how the first cruises are going and how successful they are before booking their next cruise. Thirty-eight percent are waiting until the worldwide COVID-19 caseload goes down, and 37 percent said they wanted to get a vaccine first. Only 1 percent of Cruise Critic readers in the survey said that they wouldn't book a cruise.