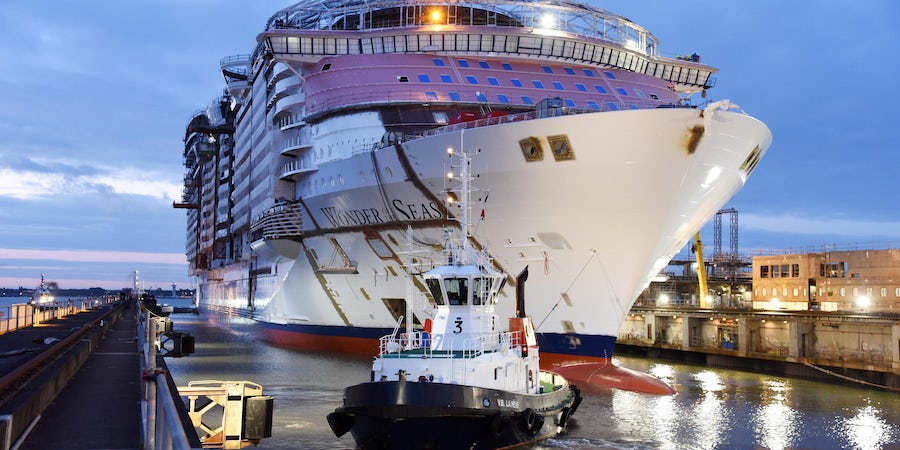 Wonder of the Seas Float Out St Nazaire

Wonder of the Seas Float Out St Nazaire

(12:50 p.m. EDT) -- Royal Caribbean's Wonder of the Seas was floated out Friday at the Chantiers de l'Atlantique shipyard in the French town of Saint-Nazaire.

The fifth Oasis-class vessel -- set to be the largest cruise ship in the world when it makes its delayed debut -- will now enter the fitting out process during which time the ship's interior spaces will be built and furnished.

Another huge ship -- MSC Cruises' Virtuosa -- also under construction at the shipyard was moved to make way for the new Royal Caribbean vessel.

Tugboats were used to move Wonder of the Seas on its approximately 1,500-foot journey as the ship's engines are not yet operational.

The float-out marks a major milestone in the construction of any ship, marking the first time the ship's hull has touched water. Following fitting-out, Wonder of the Seas will have its engines and technical systems run-up for the first time, and will then embark on its sea trials before being handed over to Royal Caribbean for official delivery.

Not much is known yet about Wonder of the Seas, but it is likely to follow the same game-changing "neighborhood" layout and "scooped out" interior design pioneered by the original Oasis of the Seas, in which different parts of the ship are themed by activity, whether that is sport, entertainment or elegance and a section of the ship has inside cabins with views to the Boardwalk.

All four ships in the class have a vast choice of restaurants, bars and activities such as zip-lining, multiple pools, waterslides and virtual surfing.

The 5,448-passenger Wonder of the Seas was originally due to enter service in China next year. However, Royal Caribbean confirmed in July that the ship would likely be pushed back until 2022.

In its second-quarter earnings call in August, Royal Caribbean announced it expected delays of at least 10 months to all newbuilds, including Wonder of the Seas, as a result of the ongoing global health crisis.