You may also like
Dismiss
Coronavirus: Updated Cruise Ship Policies and Cancellations Because of COVID-19 (2021)
Norwegian, Royal Caribbean Team Up To Create Cruise Health and Safety Protocols
What Happens to Cruise Ships During the Pandemic's Hurricane Season?
Rolling Out the Deals: Why Now Might Be a Great Time to Book a Cruise
Popular Royal Caribbean Cruise Ship To Homeport From Barbados For First Time
Ships Ahoy! A Weekly Round-Up Of Worldwide Cruise Ship News
Ships on the Move: Your Weekly Cruise Ship Round-Up
Out to Sea: Keeping Tabs on the Global Cruise Fleet
Royal Caribbean Starts Construction On New Utopia Of The Seas Cruise Ship
Live from Grandeur of the Seas: The Beloved Lady G Cruise Ship Still Reigns 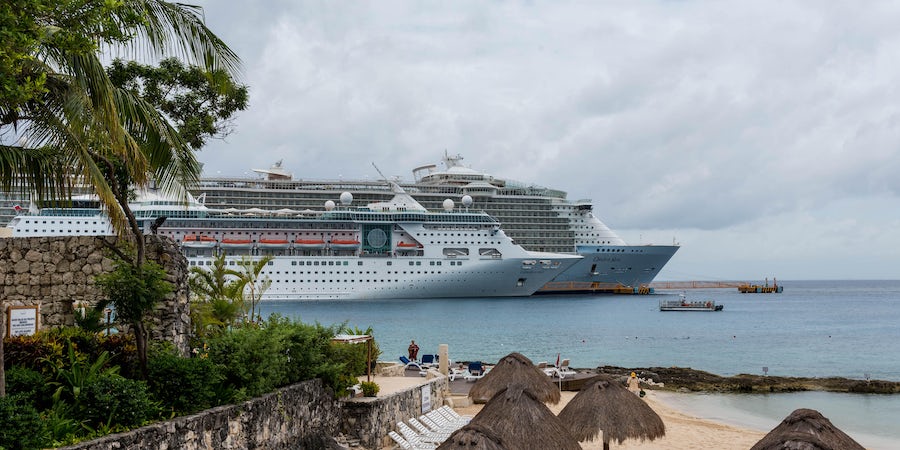 Ship Exterior on Empress of the Seas

Concern for Empress, Majesty of the Seas Cruise Ships Grows; Royal Says It's Not Selling

Ship Exterior on Empress of the Seas

(Updated 11:37 a.m. EDT) – Empress of the Seas and Majesty of Seas -- two of Royal Caribbean's oldest vessels – are still being tracked by Cruise Critic members who are concerned that the line plans to sell them.

Royal Caribbean has strongly denied it has any plans to sell the 1990-built Empress of the Seas, and hasn't yet commented on the future of Majesty of the Seas.

But Empress is very close to Turkey, where vessels often go to be scrapped, while Majesty is now bound to the Mediterranean from England.

Despite their age and lack of bells-and-whistles relative to Royal Caribbean's newest and most feature-laden ships, Empress and Majesty of the Seas both have a loyal following of cruisers drawn to the vessel's intimate sizes, classic public rooms, and broad open deck spaces.

Passengers with future bookings on both vessels are worried; Empress and Majesty of the Seas can currently be booked for sailings through April 2022.

"I am booked on Empress for April 2021 for the Western Caribbean," writes Agavegirl1. "I have had no communication from Royal.  I have a refundable deposit and drink package for two invested.  Suggestions?"

Others suggested that Royal Caribbean could have secured more favorable long-term layup arrangements in the Mediterranean -- though the proximity to the shipbreakers in Turkey still doesn't sit well with many readers.

"Maybe the layup is planned for several months and they are getting a better deal on resupply in this area," writes Biker19.

"And they are much closer to Turkey in case they "spontaneously" will decide to scrap the ships," writes LAX350.

Empress of the Seas: At Anchor off Greece

The furor around Empress of the Seas started in late-July, when reports surfaced on maritime industry site Tradewinds that Empress was for sale.

surfaced indicating Empress of the Seas -- the oldest, smallest vessel in the Royal Caribbean fleet -- had indeed been sold. Reportedly, the sale was to a New York-based shipbroker that has already scrapped multiple vessels.

A thread on the future of Empress of the Seas has grown to encompass 18 pages and 427 posts as of this writing and has remained near the top of the Royal Caribbean boards for several weeks now. Its future is still a hotly contested topic, despite Royal's assurances.

"The Empress and the Majesty knew their fate when they were used to transport crew members to Europe," writes ipeeinthepool. "Why would you use these older ships unless you knew that they weren't returning to North America?  This may be encouraging news for fans of the Grandeur [of the Seas], perhaps she will be used to replace the Empress or the Majesty."

Others took umbrage with what they perceived to be a lack of transparency on the part of Royal Caribbean in terms of future fleet planning.

"If Empress does undergo a cold, long-term lay-up, it could take months to reverse," writes livingonthebeach.  "RCI is currently selling cruises on her for November 14, 2020 out of Miami.  How transparent is that, if true?"

When one poster asked why the contradiction still exists between reports of the ship's sale and Royal Caribbean's statements to media denying this, other members responded that the financial considerations couldn't be overlooked.

Majesty of the Seas Now Under Microscope

Speculation spread to the second-oldest ship in the Royal Caribbean fleet this week, after Majesty of the Seas started heading south.

Majesty left its temporary home on the coast of England, where it has been porting in Southampton and Portsmouth for several months after initially sailing to Europe to repatriate crew. It is now en-route to Valletta, Malta.

The Maltese port of Valletta has in the past served as a staging ground for ships offloading equipment and stores before proceeding to the shipbreakers in Turkey.

"Majesty is still part of our fleet and we look forward to our healthy return to service," a Royal Caribbean spokesperson told Cruise Critic via email.

Majesty of the Seas is the last of the Sovereign Class ships built for Royal Caribbean that included the former Sovereign of the Seas (1988) and Monarch of the Seas (1991). The latter two vessels, which operated as Pullmantur's Sovereign and Monarch, were beached in Aliaga, Turkey last month and are in the process of being rapidly dismantled.

Why These Ships Matter

Aside from the personal and sentimental reasons for wanting to see Empress and Majesty of the Seas remain a part of the Royal Caribbean fleet, interest in the fate of these two vessels continues to be strong, in part because Royal Caribbean has so far been spared what Carnival Corporation has gone through during this pandemic.

Within Carnival Corp., cruisers have seen the fire sale of four Holland America Line vessels and one P&O ship and the scrapping of at least three relatively-modern cruise ships, including the iconic Carnival Fantasy (1990) and sister-ship Carnival Inspiration (1996).

Posters note it is still too early to draw conclusions, particularly in the case of Empress of the Seas, which left the Royal Caribbean fleet to join Spanish subsidiary Pullmantur in 2008, only to be rolled back into the fleet in 2016 in order to conduct Royal Caribbean's first-ever cruises to Cuba.

"She's been written off before," writes Pratique. "Who knows how this will play out."

Cruise Critic has reached out to Royal Caribbean for comment and will update this article as more information becomes available.