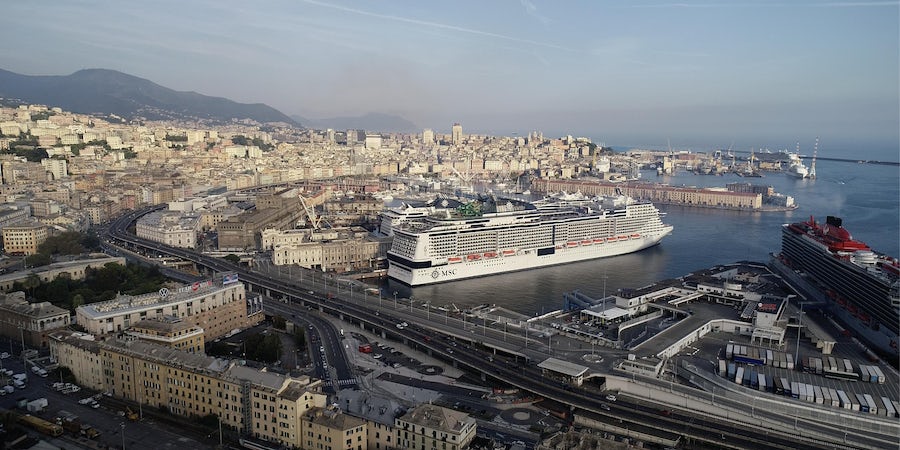 (12:55 p.m. EDT) -- As the global cruising industry continues to grapple with the COVID-19 pandemic, two narratives about its future are emerging -- and which one you follow depends on where in the world you live.

On the one hand, there's the United States, long cruising's biggest market. With COVID-19 cases continuing to spike in many states as the industry's voluntary pause enters its fifth month, nearly all cruise lines have canceled sailings through November 1, with some prominent lines, such as Crystal and Viking, shutting down the entire 2020 season.

On the other, there's Europe, where small shoots of hope are taking root. MSC Cruises returned to sailing in Italy this weekend, with some of the most comprehensive health and safety protocols yet, including rapid-response COVID-19 testing in the terminal; masks onboard; and only allowing passengers off the ship in port if they are on designated shore excursions. Costa will follow in September.

Other cruise lines currently sailing in Europe include TUI, Hapag-Lloyd, Ponant, CroisiEurope and the small ship line Variety. River cruise lines are also finding success with European markets; Rudi Schreiner of AmaWaterways said recently that 58 river vessels were cruising on Europe, on the Rhine, Danube, Rhone and Douro. (His own line has found success partnering with the German company e-hoi on AmaKristina).

What's notable, too, is that this re-emergence of cruising in Europe is happening without the industry's biggest customers: Americans. In fact, English speakers in general have not been part of the early comebacks, with Australians still facing bans on international travel and British citizens generally being warned off ocean cruising -- but not river cruising -- by the Foreign & Commonwealth Office.

Pushing On, Despite Setbacks

That's not to say that Europe hasn't had setbacks. Norway had been the first country to welcome back cruising, with Hurtigruten and SeaDream Yacht Club setting sail with mostly Norwegians and Danish passengers in June. But a COVID-19 outbreak on Roald Amundsen prompted the country to temporarily ban ships with over 100 passengers and crew onboard from stopping in ports, leading Hurtigruten to cancel its expedition cruises.  SeaDream was forced to cut down its crew to get under the limit to make the rest of the season work.

Still, it's notable that the incidents haven't stopped other European lines from moving forward with restart plans. "It's important to give some proof that cruise ships can be a healthy bubble," said Gianni Onorato, CEO of MSC Cruises, after that line released its guidelines.

There's a feeling that the COVID-19 positive incidents, which also occurred on Paul Gauguin in French Polynesia and UnCruise in Alaska provided important takeaway lessons that might help the industry overall as it tries to come back in the coronavirus era.

"It's an opportunity to learn from them," Frank Del Rio, the CEO and President of Norwegian Cruise Line Holdings, said in that company's Q2 earnings call. "This virus teaches us something every day. While it's disappointing, I'm glad that these cruise companies have handled the situation very well."

Neither ship ended up with community spread. The positive COVID-19 tests were contained to a single passenger, showing that many of the new health and safety procedures that the lines have put into place are working.

Dan Blanchard, the CEO of UnCruise Adventures, noted that rapid-response tests would have solved the issues that his line had, when a positive test at the airport ended up forcing the entire cruise -- and subsequently, the season -- to be canceled. The passenger later tested negative, but by then, the damange had been done.

MSC Grandiosa, which left Genoa on Sunday for that line's return to the Mediterranean, does employ rapid-response tests in the terminal, before passengers board. The entire industry, as well as cruise fans, have been watching the European line closely to see if it succeeds.

What many Americans also don't understand about the European cruising restart is that many countries in Europe have wrestled the virus into a more controlled situation than we have in the United States.

While cases have been on the upswing in Greece since tourism reopened -- the country attributes 1,667 of its 7,222 positives to travel from abroad -- Cruise Critic's experience on Variety Cruises still seemed relatively normal, despite enhanced safety protocols.

Crew only wore half-masks, with noses exposed, which is approved gear in Greece. Masks were not mandatory for passengers (unlike on some European river cruises). Daily temperature and oxygen checks made passengers feel as though they were in a safe "bubble" (although people do have COVID-19 without fevers, and temperature checks do not catch asymptomatic passengers) and continuous deep cleans with hospital-grade equipment took place on the vessel, including in cabins.

Perhaps the most audacious action on the cruise came when dancers came onboard, encouraging passengers to get up and hold hands, ungloved (though it's worth noting, that the three dancers all held handkerchiefs as a shield between them and passengers' hands; and the dancing took place outdoors on the sundeck).

Americans used to masks and social distancing, as well as ever-rising cases, might cringe at such a sight. More reassuring are the reports from lines serving northern European countries, where strict initial lockdowns have morphed into a more open daily life, where citizens nonetheless tend to follow public health guidance more stringently.

On AmaWaterways' German charter, it has not been an issue to convince guests to wear masks when necessary, co-founder Kristin Karst said. "The guests have the shared understanding of the importance of health and safety and they have been very cooperative," she said in a recent webinar. "Germans are very, very disciplined and that is what we've seen."

Cruise travel in the U.S., by contrast, is still fraught with COVID-19 issues.

States that seem to have the virus under control, including New York, New Jesey, Massachusetts and Maine,  have implemented 14-day quarantines on people traveling from states where COVID-19 infections are rising. Important port states such as Texas, Louisiana, Florida and California, are still considered hot spots. And other desirable tourism destinations such as Alaska, Maine and Hawaii require documented negative COVID-19 tests to enter.

Add in the problem of destinations -- many Caribbean islands are also requiring negative COVID-19 tests, or shutting down international tourism all together -- and it's no wonder that several major cruise lines have outright canceled 2020.

When North American cruising will resume is anyone's guess. The U.S. Centers for Disease Control & Prevention has asked for public comment on how cruising should come back; more than 2,000 comments have been submitted already, with a month to go until the September 21 deadline. (Interested? Read our step-by-step guide to commenting.)

While specifics haven't been released, all of the major cruise corporation CEOs have said that the measures will follow best scientific practices for confronting the virus and echo what people are doing on land.

"One of the things we've seen about COVID is this is an ongoing process," Royal Caribbean Group CEO and President Richard Fain said at that company's Q2 earnings call. "We'll start to see some things early fall, but then there will be changes. I think this will be a continual process (to restart). I think it would be a mistake to assume it all ends at one time."

And if attitudes -- and more importantly, virus containment -- continue the way that they have, Europe will definitely lead that charge.