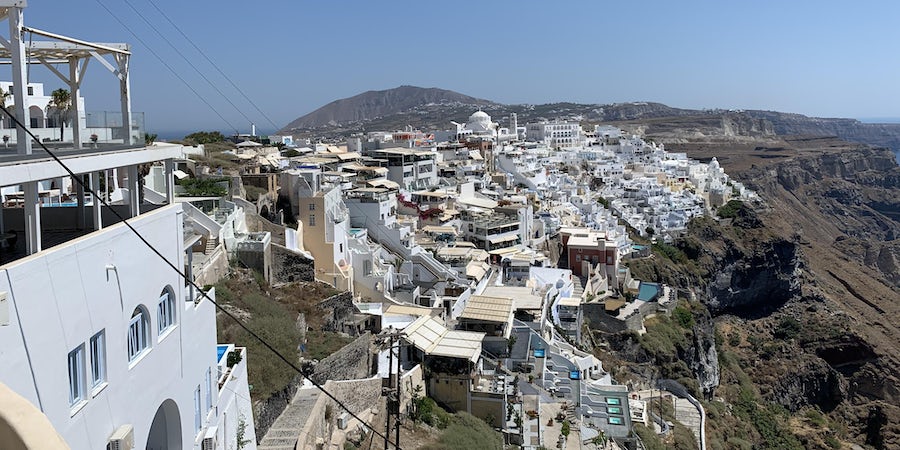 Just Back From The Greek Islands: Cruise Ports Filled With Locals, Not Tourists

On a typical high season day, the tiny winding streets and cafes of the must-see Greek islands such as Mykonos and Santorini will be so crowded with tourists that you'll get caught up in people jams.

Not so this year, when the lack of flights up until mid-July and the almost complete absence of cruise ships has meant the islands have almost been transported back in time, to a place before mass tourism.

There is, in fact, one small cruise ship -- Variety Cruises' 49-passenger Galileo, a three-mast ship, which set sail from Piraeus last Friday. The sailing marked the first return to the Eastern Med since cruising was suspended worldwide in mid-March.

New health protocols mean the ship is sailing 60 percent full. On that first sailing, it carried just 31 of us onboard, plus crew, on a seven-day round-trip cruise, visiting Poros, Milos, Folegandros, Santorini, Paros, Mykonos and Syros.

We were expecting the Greek islands we visited to be largely devoid of tourists, but they are somewhere in between -- more like a shoulder season or in some cases, off season.

The ones that don't rely on cruise ship passengers to drive the economy seem to have fared the best.

Here's what we found.

After setting sail from Piraeus in the late afternoon, we arrived to Poros in the early evening and found it packed with diners along the quayside where we docked.

Catching snippets of conversation, we gathered the diners were mainly locals enjoying new-found post-COVID freedoms (Greece had a very strict lockdown, which partly accounts for its extremely low COVID mortality rate of 192 people). Poros' proximity to the Greek mainland also makes it a very popular island getaway for Athenians.

The following day, we moored just off the island of Milos to do some swimming in the waters of the white cliffs and bays that mark this side of the island. We shared the almost deserted beaches with a tourist boat and a few private yachts.

Our next stop, late afternoon, was the gem of an island that is Folegandros. The town itself sits atop a hill, a few minutes' drive from the port. It's a cluster of exquisite white-washed houses with blue doors and shutters, connected by tiny winding streets mostly devoted to private dwellings and practical shops selling stuff like hardware. In other words, it's well off the tourist trail already, though there are regular ferries from the mainland.

The squares were packed with diners, but the usual nationalities that you might expect to hear on a Greek island at the height of summer (apart from of course North Americans and Australians and New Zealanders) such as Germans, Italians and Scandinavians, were just not around. It was a mixture of locals, French and Brits, though just a handful.

On a typical July day, you can spot three, sometimes four, large cruise ships in the caldera of Santorini. As we came closer to the harbour (where Galileo, being so small, docked), we looked in vain for people, that tell-tale snaking line from the cable car all along the harborfront. Even what we thought was an actual donkey turned out to be a statue of one.

When we asked a shopkeeper leaning on her doorway, looking out into the street where the donkeys were her reply was simple: "No cruise ships, no donkeys."

And to that you could add: No cruise ships, no huge crowds of people blocking these tiny streets, but also -- no cruise ships, no business. Jewelry stores were open but devoid of people. The cable car went every 10 to 15 minutes with just a few people in it. The tender service operated by locals to and from the pier to the ships (lines have to use locals to tender) was non-existent and the donkey herders lay fast asleep in the shade, with literally no business. Although it was certainly easier to get around the cramped streets of Fira, it felt as if there was something missing in terms of the atmosphere here.

We headed to the famous black sand beach of Perissa which we expected to find similarly quiet, but it was packed. We spoke to a barman to ask how business had been: "If you had come last Sunday, this beach would have been very quiet. It's only busy now because it's a Sunday and people are off work. Come tomorrow, there will be very few people here."

In Mykonos, our guide to the ruins of Delos, Antonis, almost gave us a hug he was so happy to see us: "You're the first cruise ship group I've seen all season! Thank you for coming to visit us!"

Delos itself was very quiet, with just one ferry boat of tourists visiting, perhaps 100 people or so, and there were moments when we felt we had the island to ourselves.

Back on Mykonos, the atmosphere did not seem vastly different. It was quiet in the streets in the afternoon (when you might expect to see passengers), but the streets came alive after sunset, with people packed into the bars and restaurants, though largely shunning the overpriced jewelry stores and trinket shops.

Is this quiet a good thing? It depends who you ask, of course. There's no doubt it's a unique way to see the islands as they haven't been seen since the rise of mass tourism. The Greek islands have been pointed out as targets of overtourism for years. But at the same time, locals are hurting.

The question is, how long is that sustainable?

We spoke to Variety Cruises EVP, Ioannis Terdamos, who believes some sort of schedule limiting, but not banning, cruise ships from the islands is the best approach:

"I hope we can learn lessons from this time," he said. "The islands need the cruise ship tourism, but at the same time they do not want to lose their character.

"If they can talk to each other to make sure there is just one cruise ship visiting one day, and another the next, then that I think will work."

This approach has already been agreed by the lines in Croatia's Dubrovnik, where most ships visited on a Saturday, overwhelming the tiny, walled city. Now they have co-ordinated their schedules and arrive on different days, or leave at different times of the day.

If this approach can be applied to the Greek islands, then perhaps a balance can be struck between preserving their character and their economy.

In the meantime, summer 2020 offers a once-in-a-lifetime glimpse of how things were before mass tourism -- and maybe how they could be again.