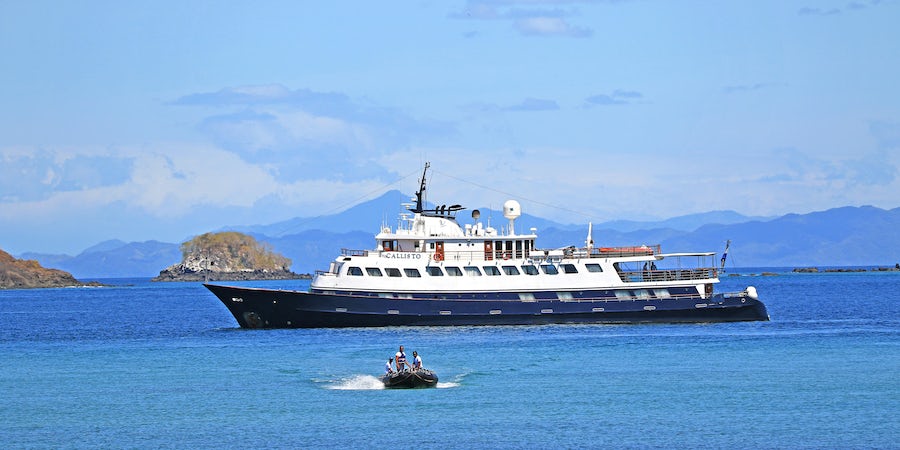 (10:10 a.m. EDT) -- Variety Cruises is planning on adding a second small ship in the Eastern Med this season, due to increased demand.The Greek line of small ships plans on adding the 34-passenger Callisto for the remainder of the summer season, The line is already operating the 49-passenger Galileo, which resumed operations July 24, becoming the first cruise line to do so in the Eastern Mediterranean since the start of the COVID-19 coronavirus pandemic.Both ships are limited to a maximum capacity limit of 60 percent, meaning Galileo can carry a maximum of 31 passengers and Callisto would only be able to carry 20.But demand is coming from large groups, who have booked Galileo, so the line needs to add the second ship to keep up, according to Ioannis Terdimos, EVP of Hotel Operations."We have some large groups booked onboard Galileo," he said. "Groups that are bigger than we are allowed to carry onboard because of the new health protocols."Some people are hoping that the 60 percent protocol will change, but if not we will have to add a second ship and split the group."As a small ship that is treated more like a yacht than a cruise ship, Variety had permission to restart on May 24th, but a lack of flights and the need to reassure passengers about enhanced health protocols meant they delayed their restart until last Friday.""We wanted to restart much earlier but circumstances did not allow us to do so," Terdimos said. "It didn't depend on us, so much as the rest of the world wanting to cruise again."{#widget:image|decorators:article_image|image:2331|title:Galileo (Photo: Variety Cruises)|description:Galileo#}Galileo usually sails with three quarters of passengers hailing from the U.S., but not so this year as U.S. citizens are barred from entering Greece.The line has had to pivot towards the domestic market, as well as French, Germans and Spanish, all of whom are onboard this first sailing."We are still hoping we will see Americans this season," Terdimos added. "Perhaps as soon as September."Both ships will operate in the Eastern Med, offering Greek islands cruises until November 8th.The Greek government announced this week that Greece is open for cruise travel, as of August 1.

has reported that cruise ships will be allowed to homeport in Piraeus (Athens), Rhodes, Heraklion, Volos, Corfu and Katakolon, and that ships will be able to make transit calls at other Greek ports on their itinerary.But with local line Celestyal Cruises suspending all operations until March and no other large line operating in the area, Variety has the Eastern Med to themselves."This season is over for the large ship lines," Terdimos said. "Even if they were given permission to restart tomorrow, the ships are not in the right place, the crews are not onboard and there simply isn't enough time to make arrangements with suppliers, tour operators and ground operations."Variety has another ship -- Harmony G -- operating charter cruises in Saudi Arabia, and is planning on resuming services in the Seychelles on the 44-passenger Pegasus.Terdimos said he hoped to resume services in Costa Rica and Panama in December on the 49-passenger Panorama and in Tahiti on the 49-passenger Panorama II."We are hoping to get the entire fleet back into operation by the end of the year," he said.-----{#widget:youtube|embed:VMl12c9-Cxs#}