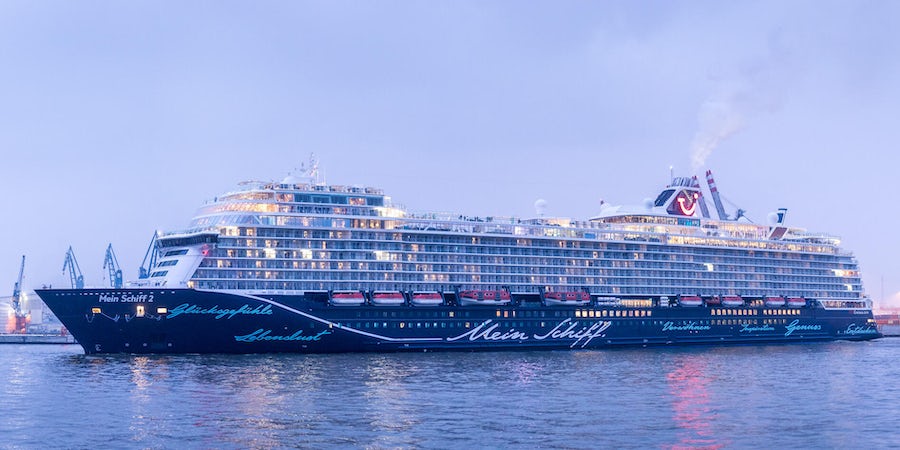 The first cruise on the line took place over the weekend, on Mein Schiff II, in the North Sea. The ship, which has the capacity to carry 2,900 passengers, sailed at 60 percent occupancy, with 1,200 passengers. Cruises on TUI are aimed at Germans, and German is the language onboard.

No ports are being visited on these cruises, which are being billed as "blue voyages." (Such "cruises to nowhere" aren't allowed in the United States, where foreign-flagged cruise ships that leave American homeports are required to stop at an international port).

While unknown to many North American cruisers, TUI Cruises is a joint venture between Hapag-Lloyd and the Royal Caribbean Group. As such, people are watching the line's return carefully to see what kind of health and safety protocols might translate to other cruise markets. Read a Cruise Critic member review from the first sailing back.

Cruise Critic member Germancruiser boarded Mein Schiff II on Monday, for the second blue voyage cruise. In our forums, he is live-blogging his experience. Here's what he shared from his first day onboard:

"On board Mein Schiff 2 since yesterday. I will not describe the ship in detail. ... In all a very nice and stunning ship. All completely for the German market.

"The biggest issue might be check in. Due to social distancing and the numbers of people that can enter the Cruise Terminal, it I took 1.5 hours to get on board. Nothing to worry about -- I expected something like this -- so it was okay.

"Before one is allowed to enter the building, ones' temperature is taken. That is a very quick and efficient process. The moment you enter the Terminal, all goes very swift. They don't hand out the cruise cards. That is waiting in a sealed envelope at your cabin.

"No menus, neither in any lounge or bar or in any dining room. You have to scan everything (QR Code) with your mobile phone. I wonder how it works for people with no mobiles. So you can read the menu on your device and order as usual.

"Hand sanitizers everywhere. Before entering the MDR, one is lead to a handwashing station -- after that the sanitizer."

Germancruiser plans to continue to update his journey as the trip progresses, and you can follow his cruise on our message boards.

TUI is not the only large cruise line that has resumed sailing. On Sunday, Dream Cruise Line made its first sailing out of Taiwan. Owned by Genting Cruise Lines, the Hong Kong-based line has rejiggered its ship, Explorer Dream, to appeal to the Taiwanese market, and also implemented health and safety protocols.

This weekend, another German line, AIDA Cruises, is slated to resume sailing on its large ocean-going ships. Although no English-speakers will be onboard, the cruise will be watched within the industry, as the line is owned by Carnival Corporation.

A few small cruise ships have been sailing over the past month, generally appealing to domestic international markets. These include SeaDream Yacht Club and Hurtigruten in Norway; Ponant and CroisiEurope in France, A-ROSA in Portugal and Germany, and various other charter companies.