You may also like
Dismiss
Coronavirus: Updated Cruise Ship Policies and Cancellations Because of COVID-19 (2021)
Celestyal Cruises Buys Costa Cruises Ship
What Happens to Cruise Ships During the Pandemic's Hurricane Season?
Rolling Out the Deals: Why Now Might Be a Great Time to Book a Cruise
Wave Season Cruise Deals 2021
Another Big Week for Cruising in England as More Ships Set Sail, Arrive For Restart
Royal Caribbean's Odyssey of The Seas Cruise Ship Officially Christened
These Ships Are Coming Back To The U.S. in 2022: Here’s Why You Should Care
Just Back From Allure of The Seas' Maiden Galveston Sailing: Hits and Misses 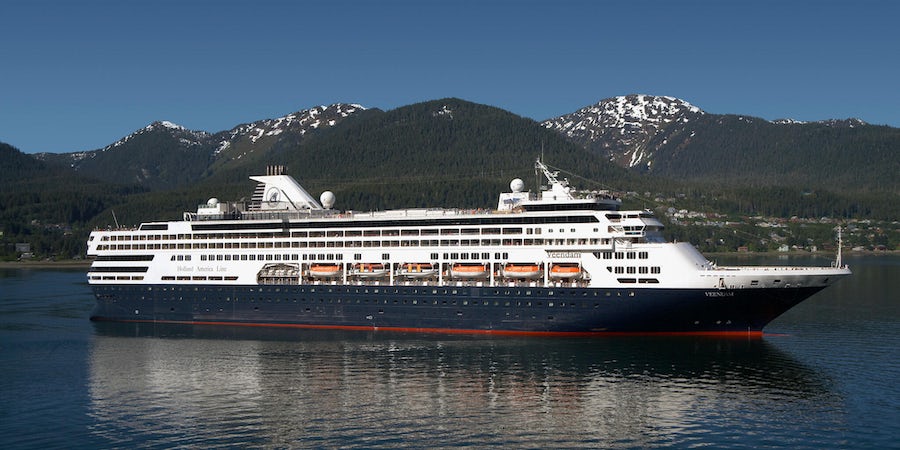 (Updated 11:31 a.m. EDT) -- Holland America Line has announced its cruise ships Amsterdam, Maasdam, Rotterdam and Veendam have been sold and will leave the company's fleet this year.

With this announcement, Holland America Line's fleet shrinks by four vessels. It leaves the 1999-built Volendam and its 2000-built sister-ship Zaandam as the line's only remaining smaller vessels, at 1,432 passengers each.

"It's always difficult to see any ship leave the fleet, especially those that have a long and storied history with our company," said Stein Kruse, CEO of Holland America Group and Carnival UK. "However, Holland America Line has a bright future ahead that includes recent Pinnacle-Class additions, with a third sister ship next year that will continue to maintain our overall capacity in the marketplace."

Amsterdam and Rotterdam have frequently sailed the company's globetrotting "Grand Voyage" itineraries. The 2021 Grand World Voyage, slated to depart aboard Amsterdam, will be postponed until 2022 and will now operate on Zaandam. The company's Grand Africa Voyage departing October 10, 2021, aboard Rotterdam will now operate aboard Zaandam on the same date.

Passengers booked on future sailings of these ships will be notified that cruises will be canceled or changed. Passengers will receive information on whether these cruises will operate aboard different vessels or will be given information or special offers on how to book another cruise once operations resume.

Passengers on affected voyages can also receive a refund if they wish.

Some of Holland America's Best-Loved Ships

Maasdam and Veendam were the last of four original S-Class ships that started with Statendam in 1993 and Ryndam in 1994, both of which left the fleet in recent years. Maasdam debuted in 1994 and had recently been outfitted with Zodiac rafts as part of Holland America Line's EXC Adventures program. The ship had a loyal following of passengers and tended to be deployed on the same runs for many years.

Veendam, the last of the four S-Class vessels, was launched in 1996 and was substantially renovated in 2009, resulting in significant changes to its exterior. It conducted Holland America's first modern cruises to Cuba in 2017.

Amsterdam and Rotterdam were part of the R-Class, or Rotterdam Class. Rotterdam debuted in 1997 and was built as Holland America's flagship, replacing the classic Rotterdam V that was built in 1959 and retired in 1997. It was built with a modified hull that allowed for transoceanic crossings to accommodate its worldwide itineraries.

Amsterdam was designed as a running mate to Rotterdam and entered service in 2000. Both vessels were distinguished by their unique split-funnel arrangement.

Two other R-Class siblings, Volendam and Zaandam, remain in-service with Holland America. They are distinguished by their single-funnel design, though are similarly styled.

"I recognize and appreciate the deep affection our guests have toward our company and the ships in our fleet," said Gus Antorcha, president of Holland America Line. "While streamlined, our diverse fleet continues to offer exceptional options for cruisers looking for a mid-sized ship experience to destinations all around the world. I look forward to carrying on those beloved shipboard offerings while cultivating new ideas to bring to our guests."

What Does This Mean For the Future of These Ships?

With Carnival Corporation, parent company of Holland America Line, announcing it intends to dispose of 13 ships in the next 90 days, there is increased concern and speculation over if ships will be sold or scrapped outright, as appears to be the case with Carnival Cruise Line's Carnival Fantasy, which is headed to the breakers in Turkey.

On July 16, it was confirmed that Rotterdam and Amsterdam would enter service for Fred.Olsen Cruises. A buyer for Maasdam and Veendam has not yet been announced.

Previously, Carnival Corporation has announced that Costa Victoria and P&O's Oceana have left the fleet.