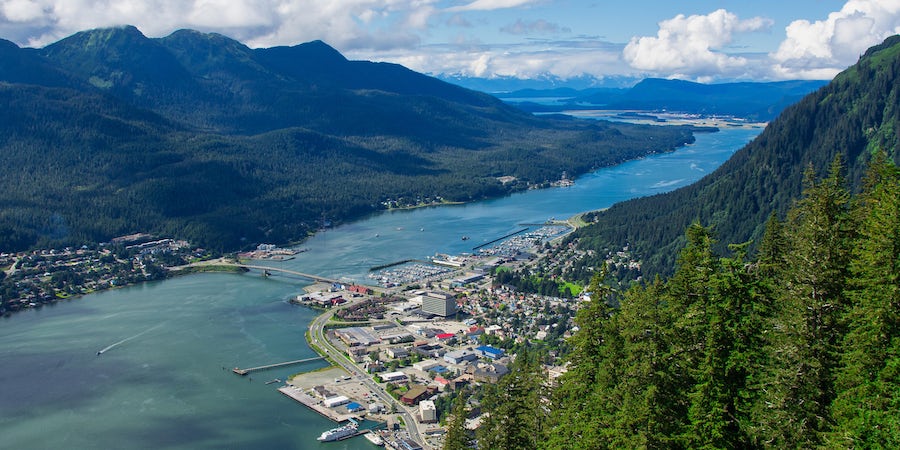 Where Will U.S. Cruising Resume First? Like Virus Spikes, It's A Moving Target

(2:25 p.m. EDT) -- For U.S. cruising fans who want to sail somewhere -- anywhere -- this summer, figuring out where and when the first American ship will actually go has been as unpredictable as the virus itself.

Ocean cruising has been on a "no sail" order from the CDC since April, and most cruise lines that belong to CLIA, the industry's trade organization, have put themselves on a voluntary suspension through mid-September.

Hope has been kept alive through small ships -- all under 250 combined passengers and crew -- who had planned to restart in different regions this summer with new stringent health and sanitation protocols, such as mandatory COVID-19 testing, even lower capacity and social distancing measures.

But as the virus keeps spiking and spreading across the U.S., those plans have steadily melted away, in most cases.

In late June, American Cruise Lines had been poised to be the first line back, with river cruises on the Columbia and Snake rivers in the Pacific Northwest. That cruise, with 60 passengers including four journalists slated to be onboard, ended up being canceled within 48 hours of sailing.

The cancellation came from the state of Oregon, which struck overnight cruises from its phased reopening. The move not only affected American Cruise Lines, but competitors American Queen Steamboat Company and UnCruise. Before the cancellation went into effect, however, several ports along the route, such as Astoria, had already taken measures to prevent ships from docking.

Both American Cruise Lines and American Queen Steamboat Company turned their attention to the Mississippi River, which has the advantage of sheer length for different itinerary combinations, as well as traditionally more cooperative states and ports that have courted cruise line business.

Logistically, the same things that make a lower Mississippi River cruise attractive to river lines and passengers -- the small, quaint ports, the revelry-oriented embarkation cities such as New Orleans and Memphis -- are what make restarting cruises there difficult.

on how reopenings and bar cultures in the state's cities like Nashville contributed to the spike. And while Louisiana had seemed to have the virus under control after high numbers in the spring, reopenings have put it back on the list as a major virus hot spot.

Other cities, such as Chicago, and governments, such as those in New York, New Jersey and Connecticut, are requiring people traveling to both Tennessee and Louisiana to submit to a 14-day self-imposed quarantine when they come back.

Regulations like that are what really make putting a cruise together difficult, a cruise industry source told us. "While many guests are regional, there are passengers that have to fly," the source said. And when those cruisers face not only restrictions along their cruise, but also issues when they return back home, a river cruise seems less enticing.

UnCruise has been laying plans to start a shortened Alaska season, beginning August 1. The small ship line has been taking the lead from the state itself, which requires visitors to present results of a negative COVID-19 test when they arrive. The line's ships -- already quite small -- will have a 66 percent capacity cap.

The line is also requiring daily temperature checks for all passengers and crew and use of personal protective gear such as masks during times when social distancing isn't possible. Plated meal service will replace buffets, and adventure gear and equipment will undergo extensive sanitation.

UnCruise's CEO Dan Blanchard has been talking extensively with Alaskan leaders in Juneau and Ketchikan throughout the summer to get the August cruises off the ground. The line has an advantage not only because of its small size, but also because of its itineraries, which focus less on port sightseeing and more on outdoor exploration in remote Alaskan areas.

As of now, Alaskan Dream Cruises also plans to resume cruises August 2. Owned by Alaskan juggernaut Allen Marine, Alaskan Dream Cruises is a small-ship line based in Sitka that has the benefit of its own private ports in remote areas; a normal sailing with the company rarely visits the traditional stops you'd find a mainstream Alaskan cruise.

"We are fortunate to have infrastructure throughout the Inside Passage," the line notes on

. "As such, we are agile and equipped to ensure your well-being."

While these regional and small ship companies feel confident that August cruises will happen, American Cruise Lines did cancel its planned Alaskan season this week.

"The recent spike in COVID cases around the country has renewed concerns and poses potential complications, as guests both travel to and return home from Alaska," the line said in a statement. "We have appreciated working closely with each community in Southeast Alaska and know that this decision has a significant economic impact on all who support tourism. American remains ready to resume cruise operations and appreciates the groundwork that has been established to operate safely. We look forward to a spectacular 2021 season in Alaska."

With rivers delayed and Alaska canceled, American Cruise Lines is now looking at its New England coastal cruises to come back first. Those itineraries, which are set to resume on July 22, are unique within the industry and feature stops at beloved islands such as Nantucket, Martha's Vineyard and Block Island. (NOTE: After this story was published, ACL canceled the July 22 cruise).

Maine, too, has opened up to overnight cruises such as the sailing schooners that make up the Maine Windjammer Association fleet, albeit with strict testing requirements. But the constantly changing situation with COVID-19 has meant that cancellations keep coming in, making the season unfeasible for some of the eight boats in the fleet to run at all, the association said.

reports that American Cruise Lines has been going to local Maine municipalities such as Bar Harbor, Camden and Rockland, to seek letters of support. Bar Harbor denied the request on Tuesday and went even further, banning all cruise ships for the rest of 2020.

Should the New England cruises be delayed or canceled, American Cruise Lines still has several options for U.S. sailings later in the year. The line runs fall foliage tours on the Hudson River; history-oriented sailings in the Chesapeake Bay; and coastal cruises in the Carolinas, Georgia and Florida in the fall.

Puget Sound, too, could be an area that has potential to reopen, should the virus spread decline. American Cruise Lines operates there, as does UnCruise; voyages are still tentative for the fall. UnCruise also has late 2020 cruises scheduled in Hawaii, which has taken a strict stance on outside visitors, similar to Alaska.

Whether these cruises will come to fruition depends on the virus and its spread. Cruising has already resumed in other areas of the world, such as Norway, Germany and Portugal, where COVID-19 has been brought under control. For the U.S., however -- where infection numbers rise daily -- regular service resumption even for the smallest of ships remains a moving target.