You may also like
Dismiss
Just Back From Celestyal Crystal: Changes On A Greece-Focused Ship
Celestyal Cruises Partners With Blue Zone Cuisine Expert for 'My Greek Table at Sea' Cruises
Celestyal Cruises Reveals New Itineraries for 2021 and 2022 Including New Ports and Longer Stays
When Will the Mediterranean Open Up to Cruises?
Cruise Lines, Charter Cruises Start to Cancel Into 2021
Small Greek Line Variety Cruises to Add Another Ship For Eastern Med Sailings
Live From Variety Cruises' Galileo: The First Eastern Mediterranean Cruise in COVID Era
Just Back From The Greek Islands: Cruise Ports Filled With Locals, Not Tourists
Which Cruise Lines Have Restarted Cruising?
Celestyal Cruises Reveals New Branding, Livery and Itineraries for New Ship 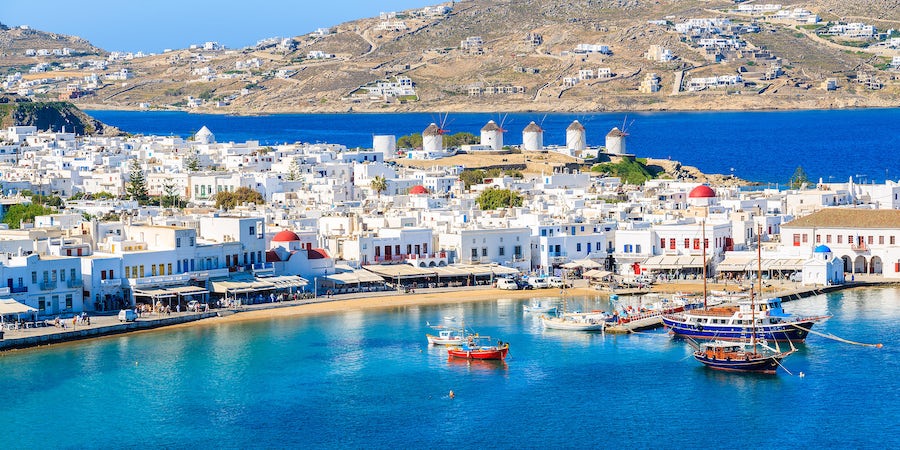 Is Greece the Next Country To Open Cruising?

Editor's note: Since this article was published, Celestyal Cruises has announced a further suspension of its cruise operations until March 2021.

(4:45 a.m. EDT) -- The cruise news coming from the Mediterranean has been generally downbeat for Americans and Brits, who face COVID-19-related quarantines and flight restrictions for summer 2020.

In fact, there's a big question mark as to whether the Med will see any ocean cruises this summer.

It's a different story for elsewhere in Europe and for Europeans of different nationalities, however. Norway-based Hurtigruten restarted its coastal voyages last week for Norwegians and Danes, and SeaDream Yacht Club has also resumed with Norwegian cruises. On the rivers, Nicko and A-ROSA have restarted for Germans, and CroisiEurope will begin in France at the beginning of July.

Focusing on a single country, with one or two nationalities onboard, on small ships and in countries with low COVID-19 infection levels seems to be the way that cruising is restarting.

Will Greece, perhaps a poster child for carefree picture-perfect sailing, be next? Two lines -- Variety Cruises and Celestyal Cruises -- both plan on restarting by the end of July and the start of August, respectively.

While Greece has been spared the brunt of COVID-19, with most of the islands having no reported cases, "given the continued travel restrictions and port closures, it’s hard to anticipate (reopening) at this time," Peden said.

"That said, given the majority of our cruises operate in the Greek Islands and the proactive measures taken by the Greek government to reopen Greek tourism, we expect a continued prudent phased approach to reopening of Greece and other destinations."

Greece also has to wait for an industry-wide approach and protocol from the EU -- which should be forthcoming in the next month or so -- to be finalized, Peden said. Key to Greek cruising coming back will be the reopening of ports, as well as airlift from source markets, he added.

Which Nationalities Will Be Onboard?

Celestyal operates just two ships, but relies heavily on non-European source markets -- around 60 percent of the passenger mix is made up of Americans, Canadians, Australians and New Zealanders. Since all of these nationalities are facing various travel restrictions, that does not bode well for an August restart.

Variety also relies heavily on international source markets, but is operating just one small ship, the 49-passenger Galileo -- so is able to source from non-U.S. markets -- i.e. the E.U. -- to fill cabins, as Lorenzo explains:

"Variety Cruises would typically be heavily dependent on U.S. arrivals and they're not happening," explained Lorenzo. "So instead it's a mixture of European nationalities."

What Changes Will There Be Onboard?

A number of cruise lines have released detailed new health protocols, including Variety.

These include: temperature checks both before and during the cruise; close liaison with the Greek authorities on each island the ship calls at in case of a Covid emergency; isolation cabins and all the usual onboard protocols, bar mandatory mask wearing (except for crew when they interact with passengers).

"The numbers are very low on our vessels, it's very small numbers of people," Lorenzo explains. "And the other thing to note is that both vessels will be operating the line hopes to launch in Seychelles in September have very good space ratios relative to the number of passengers onboard.

"There is also a lot of open area space. On a yacht cruise of this type, passengers will be spending the majority of their time outdoors. And for meal services as well. People don't spend that time, other than when they are in their own cabin, indoors."

Variety has no entertainment spaces and commercial spaces or even a swimming pool, that most cruise ships have. In addition, Variety will be operating the ship two-thirds full, filling 16 of the 24 cabins.

For Celestyal it's a somewhat different story. Their two ships -- Celestyal Crystal and Celestyal Olympia -- carry 1,200 and 1,664 passengers respectively.

"It’s too early to say at this stage," Peden said, referring to the line's new health protocols and noting that the line was consulting with CLIA, the EU and Greek Health authorities on industry-wide protocols.

He did say the line was busy re-arranging spacing and furniture as required, as well as implementing procedures to eliminate queues and reduce the public lounge capacities.

"We also have to accept that some well-known and highly popular cruising traditions will have to be put on hold or replaced with new practices, at least until better days come.," he added.

He ruled out operating at less than full capacity, however, as the ships, being older, have a higher passenger-space ratio than more modern vessels.

Celestyal is also working with the ports that the ships visit to limit the number of people inside the terminals at one time. Given that apart from Piraeus and Santorini, the line is often the only ship in port, staying overnight and for extended times, this may be an easier problem to solve.

Looking to the Future

There is a strong feeling now in the Mediterranean that this summer is lost, at least for Americans and other English-speaking nationalities; cruise lines and passengers are better off looking towards next for any hope of a restart.

And indeed many lines are reporting strong 2021 bookings, including Celestyal.

Peden says that Celestyal's 2021 bookings "remarkably up versus the same period in 2019 for 2020 sailings" -- and this is not solely down to rebookings he emphasized.

And the good news for 2021 is the North American tour groups, which are the lifeblood for Celestyal are back, according to Peden:

"We have seen a number of new North American groups book for 2021 while also accommodating those groups displaced to date in 2020," he said. "Australia and New Zealand were both growth markets for Celestyal pre COVID and this trend continues into 2021 and 2022."

For Variety, bookings are looking strong for 2021, though Lorenzo notes that many are deferrments from this year.

As for this year, the July 24 cruise is a combination of new bookings and deferrments from previous cancellations, Lorenzo said, adding: "We hope and pray we will be able to run."