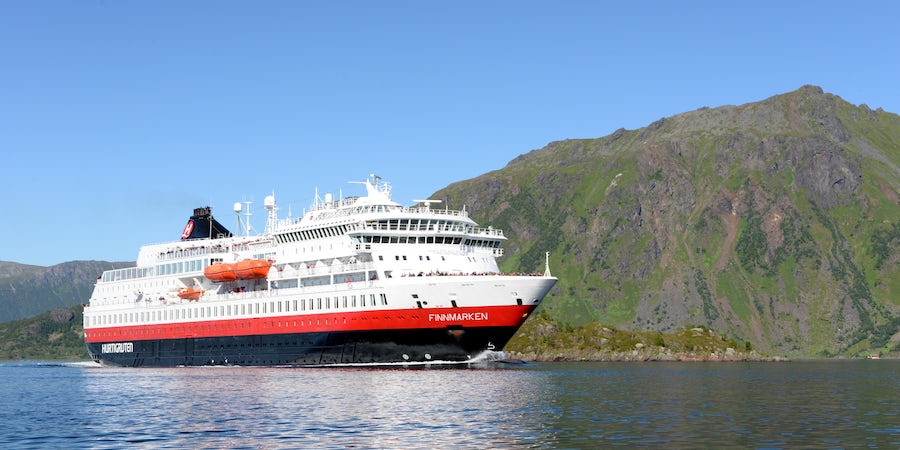 The 628-passenger MS Finnmarken, which will be carrying 200 Norwegian and Danish passengers, set sail on the 12-day trip via 34 ports to the far north of the country.

Over the next week or so, three more Hurtigruten ships -- MS Trollfjord, MS Midnatsol and MS Richard With -- will also return to service along the Norwegian coast.

On June 26, the line resumes its expedition services on its newest ship, the hybrid-powered Fridjtof Nansen, with 15-day roundtrips from Hamburg along the Norwegian coast. And on July 7, sister ship Roald Amundsen begins seven-night round trips from Tromso to Svalbard.

Yesterday's voyage marks the very first ocean line to resume cruise service, since most ceased operations in March due to the COVID-19 coronavirus pandemic.

"With the first guests boarding the beautiful MS Finnmarken over the next hours, we are thrilled to be restarting our operations," a spokesperson said. "Over the past months, weeks, days and hours, we've been preparing for this moment. We're ready.

"In close cooperation with the Norwegian Institute of Public Health and other experts, we've taken our extremely strict existing health and safety procedures and introduced additional new measures. We have been working rigorously to ensure all voyages are safe for both guests and crew -- and at the same time ensure that everyone can fully enjoy their voyage."

In a press call today, CO Daniel Skejeldam confirmed that cruises were being confined to one nationality (or in the case of the coastal voyage, two), depending on a specific country's COVID-19 infection rate, and ruled out Brits or Americans getting on the ships until our infection rates dropped significantly. Asked to put a timeline on it he said: "likely early 2021".

The line did not technically stop services, but it did drastically cut them back to just two ships and operating as a ferry service purely for locals using it to travel from one port to another.

This is the first time that passengers can take an actual cruise all along the Norwegian coastline.

Hurtigruten has also recently introduced a number of new health and safety protocols intended to curb the spread of COVID-19. These include new sanitation measures, the elimination of self-serve buffet dining, and the implementation of social distancing procedures onboard. For the summer of 2020, Hurtigruten ships will be limited to 50 percent capacity, and capacity will be limited in areas like the pool and the ship's sauna and fitness center.

The line is not alone in operating from Norway, which has had relatively few cases of COVID-19; SeaDream Yacht Club has moved both its small ships to Norway and is planning on operating cruises there in the summer.

Hurtigruten's move follows that of Nicko Cruises, which became the first European river line to resume river services. A-ROSA is due to relaunch on Portugal's Douro River tomorrow and on the Rhine on Friday.

And this Saturday, American Cruise Lines will restart its service -- the first U.S. line to do so. It will sail on the Columbia and Snake rivers in the Pacific Northwest, departing from Portland, Ore.

For a full list, read Summer 2020: Where Can You Cruise Right Now.