You may also like
Dismiss
Coronavirus: Updated Cruise Ship Policies and Cancellations Because of COVID-19 (2021)
New Luxury Cruise Line Set to Launch in December
Just Back From Hurtigruten's Finnmarken: The First Cruise Ship to Set Sail, Post-Covid
Swan Hellenic to be Relaunched As New Expedition Cruise Line
Rolling Out the Deals: Why Now Might Be a Great Time to Book a Cruise
Wave Season Cruise Deals 2021
Adventures by Disney to Offer First Expedition Cruises Geared Toward Families
Cruising the Newest Ship Afloat: Live From Celebrity Apex
Emerald Cruises Officially Launches in Australia
Live from Grandeur of the Seas: The Beloved Lady G Cruise Ship Still Reigns 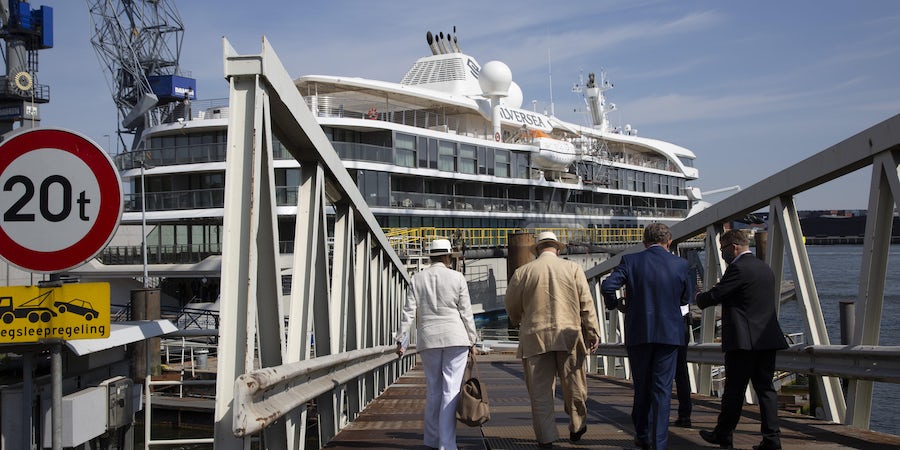 On June 3, Silver Origin was handed over to Silversea largely on time from the Netherlands' De Hoop shipyard, overcoming herculean obstacles brought on by the COVID-19 coronavirus pandemic that have seen other newbuild projects across the industry delayed significantly.

Such handovers are normally an opportunity for media to get a first glimpse of newly built vessels in person and are typically conducted before so-called "shakedown" cruises, where a select number of friends, family, employees, media and travel advisors might get the opportunity to sail the ship before it is opened to the public. With those options off the table, Silversea executives, including chairman Manfredi Lefebvre d'Ovidio, CEO Roberto Martinoli, CMO Barbara Muckermann, Conrad Combrink, Silversea's Expeditions, Tour Operations and Destination Management and Mark Conroy, Managing Director, The Americas, led a virtual tour for media Friday.

Silver Origin soon will make its repositioning voyage to the Galapagos Islands in advance of its August 22 debut. The line is also expecting to take delivery of Silver Moon, sister-ship to Silver Muse, later this fall.

"It was a very proud moment for me to attend Silver Origin's official delivery ceremony in person and to welcome Silversea's first-ever destination-specific ship to our fleet," d'Ovidio said. "I am very grateful to all involved in the build, especially the professionals at De Hoop Shipyard."

"This has been a long journey, and a journey with a lot of interesting events in between," Martinoli said.

Carrying just 100 passengers -- the most allowed in the Galapagos under current Ecuadorian regulations -- Silver Origin is notable for its bright, airy interior spaces, designed by Hirsch Bedner Associates, and for its novel approach to the standard expedition experience.

There are no docks for all but the smallest vessels in the Galapagos, meaning even initial embarkation is conducted by the ship's Zodiac inflatable rafts. To alleviate the common issues with Zodiac embarkation (steep gangways and crowding in technical spaces, for example), Silversea has designed Basecamp: a multi-purpose lounge, Zodiac embarkation staging area and knowledge hub for passengers looking to know more about the flora and fauna of the Galapagos Islands.

Basecamp will include a large, interactive LED screen, offering up content and archival pictures provided by the Royal Geographical Society of London, and will be complemented by presentations from the ship's Ecuadorian expedition team, all of which are certified by the Galapagos National Park service.

"It's going to be amazing for our guests to go there and play with the screen," Muckermann said. "Our guests will also be able to meet the expedition team there to see a preview of where they will be able to go on the day's explorations."

Connected to Basecamp is The Marina: a stern-facing area for passengers to embark the ship's Zodiacs, store provided wetsuits and even showers to rinse gear after explorations ashore. Silversea says Silver Origin will have the most-favorable guest-to-Zodiac ratio in the industry at 1:12.5, a feature that should help enable social distancing when voyages resume.

Silver Origin will be well-suited to the Galapagos: Every accommodation is a suite, and nearly every public room features oversized windows. Situated high atop the navigation bridge, the Observation Lounge offers 180-degree views overlooking the bow of the ship. A second public room, the Explorer Lounge, serves as a base for daily briefings and lectures from the expedition team, and offers additional outdoor seating aft on Deck 4.

Suites onboard were designed by Designed by Giacomo Mortola, whose firm GEM was responsible for the look and feel of Silversea's Silver Muse, which debuted in 2017. Suites feature butler service across all categories and innovations like an ocean-view bathtub, balcony showers and the new Horizon Balcony concept (think of the drop-down infinite balconies aboard Celebrity Edge or modern river cruise ships) that turn the entire suite into a balcony.

It is a similar setup to what sister brand Celebrity Cruises introduced aboard Celebrity Flora in the Galapagos in 2019. While Silver Origin shares a similar design, the onboard product and interior look and feel are considerably different, reflecting Silversea's longstanding all-inclusive luxury pedigree.

The line will offer an Ecuadorian version of its popular Hot Rocks on-deck dining experience aboard Silver Origin and will feature additional dining options in The Restaurant on Deck 4 and The Grill on Deck 7.

In keeping with Silversea's new S.A.L.T. culinary program that will officially roll out later this fall aboard Silver Moon, Silver Origin will offer menus driven around Ecuadorian cuisine utilizing locally sourced products. Ecuador has some of the strictest provisioning policies of any cruise destination and mandates that Ecuadorian products be utilized whenever possible in the Galapagos. This decree fits in with Silversea's policy of offering immersive destination experiences, both onboard and ashore.

Silversea Has A Long Background in Galapagos.

Silversea first began offering luxury expedition voyages in the Galapagos in 2013, acquiring the former Renaissance Three (1990) and renaming it Silver Galapagos. The line refitted the ship several times over the intervening years to bring its suites and public spaces up to Silversea standards and to remove much of the early dark woodgrain paneling that had characterized its Renaissance days.

The vessel was the second expedition ship to join the Silversea fleet, following the debut of Silver Explorer in 2007 (then known as Prince Albert II), and marked the first time that Silversea had offered cruises in the Galapagos.

Silver Galapagos, however, was not as luxurious as Silver Explorer or Silver Cloud and differed noticeably from the company's more lavish "classic" fleet like Silver Spirit. While it bore all the hallmarks of Silversea -- including the company's butler service for every suite -- cruisers couldn't help noticing that the ship was a bit of an outlier.

When Royal Caribbean purchased a stake in Silversea in 2018, plans were quickly drawn up to replace Silver Galapagos with a new, purpose-built vessel. Silver Origin will be the company's first luxury newbuild designed expressly for cruising in the Galapagos Islands.

The Galapagos is one of the world's most pristine areas. Located 563 miles (906 kilometers) west of the Ecuadorian mainland, this UNESCO World Heritage Site is known for its large number of endemic species that were originally studied by Charles Darwin in 1835 and have remained nearly untouched ever since.

Regulations on the Galapagos Islands are tightly enforced, and boat travel is a necessity to explore the numerous islands that make up the region. The local economy, which depends almost entirely on tourism, has been hit hard by the COVID-19 coronavirus pandemic with over 40,000 cases nationwide. Early estimates show the region

a quarter of its annual income, and many locals are jobless.

The pandemic has also had consequences on airline service to the islands. Getting to the Galapagos requires most visitors to overnight first in Quito or Guayaquil on the Ecuadorian mainland before flying the following day to either Baltra or San Cristobal Island.

In the past, only three airlines have offered service from the mainland to the Galapagos: Avianca, LATAM Airlines (formerly LAN Airlines) and TAME. The latter was abruptly liquidated by the Ecuadorian government May 20, and LATAM Airlines

While LATAM is still operating, the region is now only served by two airlines; a number that could possibly go down to one should the airline not survive. That means that air travel between the Galapagos and the mainland could get a lot costlier in the future.

has been in place since March 25 from 2 p.m. to 5 a.m. nationwide.  The Galapagos Islands are closed to visitors, and international air travel was restricted until May 31.

At Friday's conference, Silversea executives said the line expects to resume operations in the Galapagos on August 22 with the new Silver Origin and that the line has secured the necessary operational requirements to do so, including the reservation of charter aircraft to take the first passengers from the Ecuadorian mainland to the Galapagos Islands.

Martinoli also commented on the air lift situation in Ecuador, saying there is a wide availability of charter aircraft that could bring passengers to the Galapagos in the event that commercial air service is limited.

"We were already chartering planes from Ecuador to the Islands," Martinoli said. "The passengers were coming from their destination from Quito or Guayaquil into the Galapagos. I don't think this will be any change."

Silversea executives also touched on the new health and safety requirements that will be necessary for passengers, with Martinoli outlining a comprehensive plan that passengers can expect when cruises begin aboard the Silver Origin.

Executives were quick to point out that Silversea's entire fleet offers a generous amount of personal space per passenger, making physical distancing requirements easier to manage for passengers and crew alike.

Still, Martinoli said physical distancing will be enforced when cruising resumes, along with a host of other precautions.

"We are putting in place a network of labs that will test our crew before they join the ship, and a very deep health screening will be conducted before boarding for each and every guest and each and every crew member," Martinoli said. "We also have fogging of each and every cabin that we have been doing and will be doing more often than before that will remove any bacteria, any virus. The frequency of this will be much increased and we will make sure that at the beginning of every cruise the cabins will be in perfect condition."

Martinoli said that provisions and passenger luggage would be disinfected prior to being put aboard the vessel, and that the ship's medical center would be thoroughly stocked to handle any potential outbreaks of any kind onboard.