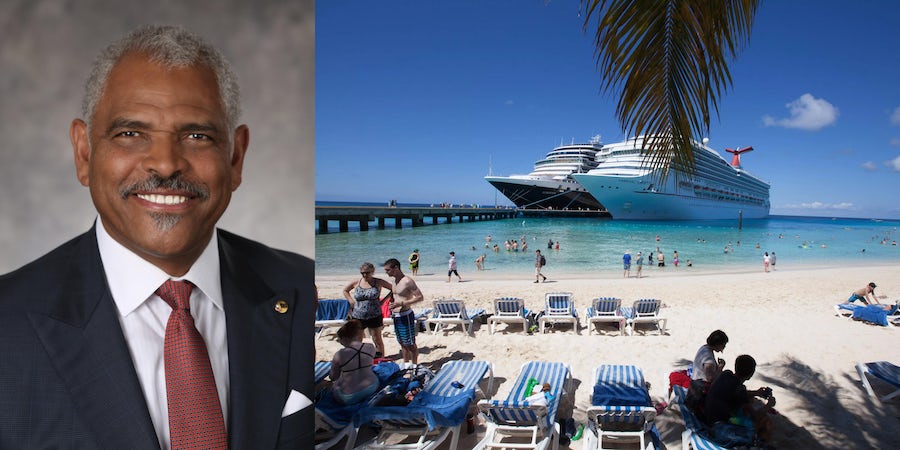 (12:45 p.m. EDT) -- Scientific and medical discoveries and advances will dictate any changes and protocols that Carnival Corporation and its nine cruise lines implement before they return, CEO and President Arnold Donald said.

In an exclusive interview with Cruise Critic, Donald said it's too soon to tell what exact changes cruisers will see on ships once they return to service, but he vowed that whatever protocols are put in place would follow guidelines put out by global health authorities such as the Centers for Disease Control and Prevention and the World Health Organization.

"If we let the science community and the medical community do their thing in the coming weeks, there'll be more alignment around what are the most effective protocols to mitigate the spread of COVID-19," Donald said. "Within that, along with working with others in the industry and the experts, we'll be able to develop the protocols that'll put cruise at the forefront in public health and again, great vacation experience."

While more information continues to come out about COVID-19, Donald is loath to put a specific date on when the nine brands under the Carnival Corp. umbrella will resume cruises. Sailings on Carnival Cruise Line have been canceled through August 1, while other brands such as Princess Cruises, Holland America Line and Seabourn Cruises, have stopped itineraries until fall.

But Donald predicted that clarity will come in the next six to eight weeks. "I don't know when we'll sail again," he said. "I think there's going to be so much more alignment around what makes sense from a public health standpoint regarding this virus in the coming weeks than there has been. … The more clarity there is, the easier it's going to be to organize around it."

Since the CDC issued its "no sail" ruling in mid-April, Carnival Corp. has been working with the government organization to follow appropriate protocols, Donald said -- although he stressed that the CDC isn't the only health organization out there for a global organization to satisfy.

"We go to 700 destinations around the world," he said. "Everybody's got their own rules and regulations, and we have to abide by them all."

What's made his corporation reluctant to announce hard and fast changes is that the information about the virus keeps evolving, week by week, Donald said. A few examples he quoted: Concerns first centered around the virus being spread through HVAC systems and on surfaces; now the science points more toward face-to-face transmission.

"You heard a lot about testing early on. Now you hear that it should be multiple testing. You heard about temperature checks in the past. Now they're saying temperature checks may be indeterminate. … There's so much data being generated right now everywhere in the world … things are starting to open up and everybody's doing it a little bit differently, so there will be lots of data, lots of things to compare and contrast."

The same state of flux can apply to cruisers who are older, or who might have pre-existing conditions. In mid-March, the lines were doing temperature scans and requiring doctor notes. "Today I would say that school is out on all of that. … We'll see if those things need to persist. … Any protocols that are in place that people might perceive as barriers will only be in place because the best information at the time says it's in the best interest of public health."

Donald stressed that no matter what guidelines the CDC and other government organizations come up with, Carnival Corp. and its brands will comply -- and noted that the company has tried to do so, even as the virus evolved over the spring.

"Whatever the CDC said, we did," he said. "The epidemiology of this thing is still not totally well understood, so things kept changing and not just with the CDC but everywhere in the world. Whatever the rules were, we followed them.

"We're not trying to out expert the experts. Of course, we participate in discussions. We have perspective. Sometimes we have data. Sometimes we think we may have some insights. Obviously, we always appreciate the opportunities to share those, but in the end whatever the rules are, we're going to be compliant with them."

Until cruises resume, almost all of the cruise lines -- not just those with Carnival Corp. -- have been canceling sailings at a staggered pace, generally on a month-to-month basis. While this approach has been essential for the lines to try to keep up with issuing future cruise credits and refunds, a recent Carnival Cruise Line announcement turned out to be "one of the most insightful mistakes we've ever made," Donald said.

In early May, the line issued a news release that seemed to detail a return to service on August 1, starting with eight ships out of three ports. In reality, that announcement was more meant to note that additional voyages had been canceled, Donald said -- but that's not how consumers and the media interpreted it.

"It wasn't a pronouncement that we were going to come back August 1," he said. "We're waiting to see how things evolve and develop."

What made the mistake so insightful is that bookings for those August cruises "went through the roof," Donald said. "They just jumped at that point, showing the pent-up demand there is. … Starting out, it's unlikely that we're going to have a demand challenge whenever we do start sailing again, whether it's August 1, prior to that or later."

So if August 1 isn't the official return date, what is? "The world is going to tell us," Donald said. "Destinations are going to open when they decide to open. It's not going to be us telling them. The things that are going to drive that is the citizens' relative appetite for risk and the extent to which they've experience COVID-19. … We'll just have to see where it goes, but the destinations are going to rule the day."

With brands such as Holland America Line and Seabourn Cruises experiencing later return dates, as well as widespread layoffs a few weeks ago and line presidents Orlando Ashford and Rick Meadows leaving, many cruisers have speculated Carnival Corp. might consolidate or weaken some of their favorite brands.

Arnold ruled out that possibility, noting that the nine brands under Carnival Corp. are all different and appeal distinctly to different types of passengers. "The reason that we have nine differentiated brands is because they are organized around guests. So as long as there's a pool of guests large enough to make those brands financially successful and viable, then we're going to have the brands. At this point, we see no reason to consolidate the brands.

"There are some ships and maybe even some brands that try to be all things to all people, but that's not us."

Again, it's geography that will drive which brands return to service first, Donald stressed. Carnival is mostly in the Caribbean, whereas a luxury line like Seabourn prides itself on itineraries that span the globe.

"We just have to wait and see."

As the medical and science communities work through COVID-19 study and destinations evaluate their risk, Carnival Corp. has been studying different ways that the cruise experience will have to change to meet the challenges that the virus presents.

Donald said that the company was researching everything from embarkation and the terminal environment to cleaning protocols and dining and shows -- and everything in between.

"When you're on the ship, if you're in a cabin, you're already socially distanced," he said. "So the issue is more the public spaces on the ship and also sufficient capacity to handle if there's spread that occurred on land that people brought on that is discovered on the ship."

A few thoughts being kicked around that Donald mentioned, without committing to any as changes cruisers should expect: Mandatory room service one night to reduce the number of people needing dining menus in the restaurants. Spreading more people from the main dining room to other dining experiences. Reducing show lengths and adding more of them. Putting empty seats in the theater between couples.

Buffets have been mentioned as a form of dining that might go away in the post-COVID-era, but Donald stressed that there are ways to have buffets with servers that are more protected than the traditional self-serve approach. When ships have norovirus outbreaks, for example, servers step in and dish out the food, rather than people using the tongs themselves.

What's more likely to change with a buffet is the queuing and the lines, rather than the choice of casual option, Donald said. "There might be some distancing or something so people aren't all together around the same service station," he said.

Lines and preventing people from being bunched together are definitely something that the cruise lines will have to address, he said. "Queuing might change. You might not be able to go out and line up in front of a restaurant. But we'll see."

A big question with many cruisers is whether masks will be required onboard. Donald said that he's not willing to commit but said that "initially whether it's required or not, some guests will choose to (wear them) on their own." For the crew, it depends on timing and what the public health recommendations are.

"Whatever the rules are, we'll follow them. Obviously, wearing masks in certain places like the theater is probably not as taxing as trying to wear it during dinner when you're trying to eat. But we'll see what happens with all that. Society and people adapt. They figure things out."

To get ships back in the water faster, some cruisers have expressed interest in itineraries that concentrate on the popular private islands. Carnival Corp. has several islands in the Caribbean, including Half Moon Cay and Princess Cay, as well as custom-built ports such as Grand Turk and Amber Cove.

But Donald said that he'd rather return in partnership with destinations. "That makes for a more interesting experience for the guest, and obviously it's an economic driver for the people of those places."

As the pandemic unfolded, cruise ships ran into issues with different ports turning away cruise ships, even if there were no COVID-19 cases onboard. But Donald said that the company wouldn't hold any grudges.

"At the time, people didn't know what they didn't know. Everybody was trying to do what they thought was best, in trying to honor their obligation for public health excellence. … We prefer science to rule the day, but at the same time, human beings are human beings, and in a state of uncertainty, we don't begrudge anybody anything."

At the same time, Donald said that the company would be as proactive as possible with destinations to share protocols and information to avoid unscheduled itinerary changes or ships being turned away.

Cruisers who are booked on the first sailings out do have a higher chance of having their itinerary adjusted, in terms of ports, as well as possibly more stringent health protocols onboard, he said. But port changes also happen during hurricane season, and travelers adjust.

The most touching thing to come out of the pandemic is cruiser loyalty and the concern that many avid cruisers have shown for the crew, Donald said.

"This is devastating for the travel and tourism industry…" he said.  "It's been very hard for cruise because we have all those cabin stewards, the chefs, the wait staff, all these people whose livelihoods are dependent on this and who live every day to exceed the guest expectations. They're not able to do that."

In the end, Donald predicts that cruising will return strong -- and with stellar health and safety protocols.

"We want cruise to absolutely continue to be the greatest vacation experience and the greatest vacation value there is," he said. "We want people to be able to cruise knowing that they're at minimum as safe from a public health standpoint as they would be in any other form of social gathering -- and hopefully even safer."