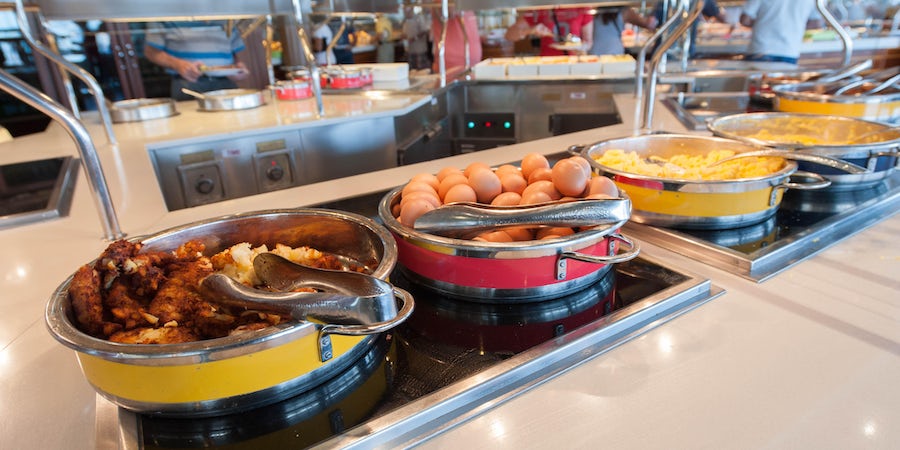 Windjammer Marketplace on Allure of the Seas

Windjammer Marketplace on Allure of the Seas

(Updated 3:24 p.m. EDT) -- A week after commenting that the line's popular Windjammer Cafe would be retooled, Royal Caribbean has clarified statements that it is looking to do away with the shipboard buffet entirely.

The comments were made by executives during a weekly virtual Coffee Chat held for travel advisors with Vicki Freed, Royal Caribbean's senior vice president of sales and trade support and service as part of the line's outreach support during the ongoing COVID-19 pandemic.

"I think in the beginning, there will not be a buffet … that's how I see it," CEO Michael Bayley said during last week's Coffee Chat session, speaking about the company's casual Windjammer Cafe eatery. "We will utilize the space, we will utilize the Windjammer, but in all probability, it won't be a classical buffet. It will be something more akin to a restaurant."

During another Coffee Chat with Freed on May 20, Royal Caribbean Cruises Ltd. Chairman and CEO Richard Fain poured cold water on the suggestion that the Windjammer would be repurposed into something else.

"It doesn't mean that you don't have a buffet," said Fain, noting that the Windjammer offering could remain as-is, but with waiter-driven table service as opposed to self-service options where passengers would handle common serving utensils. "I think it's very likely that you're not going to see that on land or sea," he said of shared serving utensils.

"Cruise travel has evolved. Cruising two months ago is very different than cruising was two years ago or five years ago," said Fain. "The important thing is that the cruise experience is an experience. It's a building of memories for families, for people to be together. It's a unique environment that allows people to experience new and different things. And we need to maintain that."

The idea of scrapping the Windjammer buffet aboard Royal Caribbean ships was met with considerable push-back on Cruise Critic's message boards, while some indicated the Windjammer was of little importance to them overall.

"As for no Buffets … No Buffet = No cruising for us," FiftyOnePlus writes. "There is absolutely no reason to remove buffets from cruises."

"I think eliminating the Windjammer is long overdue," joelheather writes.  "Those that have been cruising for more than 20 years will remember the elimination of the midnight buffet, and we all survived and kept on cruising."

Others suggested that a casual buffet was just a way of life on big, multi-thousand-passenger vessels.

"These mega ships have a lot of people to feed multiple times a day," Ocean Boy writes. "They have to be able to do that in an efficient manner."

Earlier this week, Royal Caribbean announced a staggered approach to its resumption of cruising during its first quarter earnings call, and further suspended cruises across its brands well into the summer months.

"Our first priority is always the health and safety of our guests and crew," said Fain. "That's a heavy responsibility and the one thing we will not do is a rush to judgement on that. We will not go back before we are comfortable that we have put in all the hygiene protocols, all the procedures, all the systems to provide the kind of environment that we would feel comfortable being in."