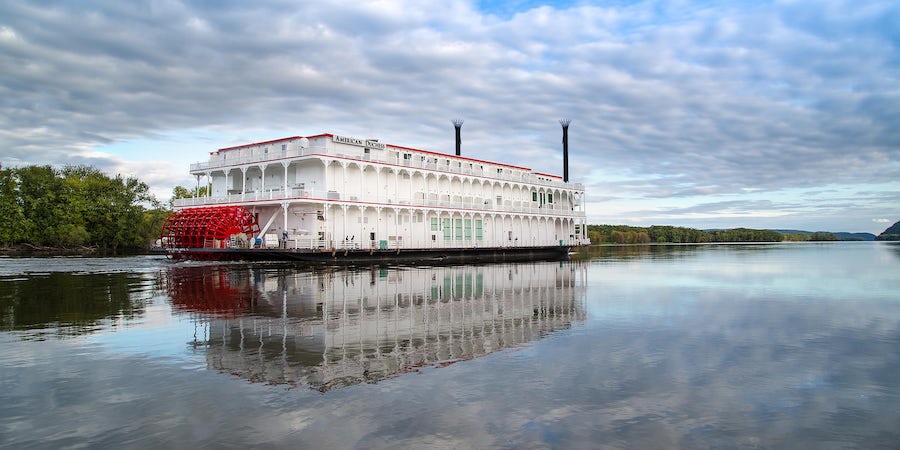 (Updated 3:20 p.m. EDT) – The U.S.-flagged river cruise line, American Queen Steamboat Company, plans to resume to sailing on American rivers beginning in July, though its entry into service dates have now been pushed back slightly.

The line, which originally had set a return date of June 29 for American Duchess, on the Mississippi River, will officially re-enter service on July 20, with a pre-cruise stay that begins on July 19 with the company's Mark Twain’s Mississippi sailing from St. Louis, MO (Alton) to Minneapolis, MN (Red Wing).

American Empress was due to enter service on July 6 with a voyage along the Columbia and Snake rivers from Portland, OR to Clarkston, WA; sailings aboard American Empress will now resume after July 19.

Both American Countess and American Queen will extend their sailing suspensions along the Mississippi River through August 8, 2020.

The company, which owns Victory Cruise Lines, was hoping to get one of its Victory small ships on the Great Lakes on July 1. That plan, however, was scrubbed in favor of canceling the remainder of the season for Victory Cruise Lines and focusing instead on 2021 departures and the debut of the company's forthcoming Ocean Victory cruise ship.

In an exclusive interview with Cruise Critic, American Queen Steamboat Company CEO and President John Waggoner said that a combination of elements, including the fact that the line's ships are small and a consumer appetite for domestic travel, combined with new health and sanitation features that the line plans to implement, make the reopening dates realistic.

While the line won't be the first to return to the U.S. rivers – competitor American Cruise Lines has released plans to start cruising on June 20 on the Columbia and Snake with its ship American Song and June 28 on the Mississippi River on American Harmony – having river cruising reboot during the prime summmer vacation months still an achievement within the industry.

The current orders from the Centers for Disease Control and Prevention prohibit cruise ships from sailing before July 24, or whenever approval is given to the lines' plans to rework the cruising experience to address COVID-19 concerns.

But those regulations specifically apply to ships that have more than 250 combined passengers and crew. Several small cruise ship lines in the United States, including American Cruise Lines, have vessels that fall under that number. At 166 passengers and 80 crew, American Duchess falls under those parameters, Waggoner said.

What makes the scenario more likely to happen, he said, is that several ships in AQCS's fleet technically doesn't fall under CDC oversight. Instead, because it's an American-based company with American crew, the main regulatory is the U.S. Food and Drug Administration, which has conditionally approved the plan.

"Our plan that we've submitted to the FDA basically follows the CDC guidelines and requirements," he said. "It's just a slightly different reporting structure. ... Technically, we report to the FDA, so if the FDA approves our plan, then I think we're good."

The current plan for reopening includes a partnership with Ochsner Health, Louisiana's largest nonprofit healthcare system, and its Safe to Return to Work program. The customizable program checks all the company protocols, policies and procedures, Waggoner said, including a pre-cruise screening questionnaire and temperature monitoring.

"We have the added benefit of a one-day cushion because we include a free night hotel stay" before boarding, Waggoner said. When guests check into their hotel, a medical professional affiliated with Oschner will take their temperature. Those with a fever of 100.4 would not be able to board. "We can make sure that we've screened all of our passengers and crew before they get on."

The line is also buying the same disinfectant fogging machines used by Delta Airlines to sanitize public spaces at night, Waggoner said. The hop-on, hop-off buses that the ship uses for excursions have reduced capacity nearly in half, to no more than 28 people, to encourage social distancing.

The ships will have to alter some of their traditions, such as self-serve cookies and soft ice cream. The food will still be there, Waggoner promised; the cookies will just have to be distributed at a different time and a crew member stationed to serve ice cream. Crew will be trained in health and safety procedures.

Masks are the one question that has been on every cruisers' mind -- and Waggoner said it's likely to be part of the experience, at least in the beginning. "Masks have been shown to be very, very effective. It not only protects the person that might have the masks on, but it protects other people. My guess is yes, the majority of our guests and the majority of the crew members will probably have masks on board."

While the FDA is behind the line's plan, there are still barriers to getting the ships up and running for their target dates.

The line had wanted to get American Empress, its ship on the Columbia and Snake rivers, up and running for June 22. While the ship has the capacity to carry 223 people and 82 crew, the line would cut down the number of people onboard to 170 to be able to sail, Waggoner said.

But ongoing discussions with the U.S. Coast Guard has centered around whether the ship falls under the 250 crew and passenger count if the capacity is technically still higher -- even if the vessel isn't full, Waggoner said. "We've got some pushback."

The scenario for American Duchess seems more likely because the ship's capacity is under 250. In addition, the states where American Duchess sails along the Mississippi River are more eager for cruise ships to come back, he said.

"There in the South, it's a little bit more open arms. They're more business friendly. They're basically calling and saying, 'Hey, when are you guys coming back? Because we have a lot of small businesses in these towns that are just dying, and we'd love for your customers to come back.'

"I think they're a little bit more cautious up in Oregon and Washington."

Canada, too, is presenting more of a challenge for the Victory ships. For one, those 202-passenger ships, which sail into Canadian ports on the Great Lakes, are firmly under the CDC, Waggoner said. And for another, Transport Canada, which oversees all of the country's transportation including ports, has stopped all cruise travel until October 31. The border between the two countries is shut to all nonessential air, land and sea traffic until July 21, 2020.

If Canada remains leery of cruise ships and decides to move back its open date, "that would kill our cruises on the Victory I," Waggoner said. "So we almost have to take everything on a day-by-day basis."

Regardless of whether the projected opening dates stick, Waggoner remains confident that American river cruising will return before other types of cruising.

For one, many people who go on European river cruises might be out of luck this year, with the different restrictions on entry that many countries have put in. "I think a lot of those guests that would normally go on an European river cruising are saying, 'I'm not sure I want to take an international flight, but I am willing to take a domestic flight or I'm willing to take a drive.' "

And for another, Waggoner is seeing a pent-up appetite for cruising; organic bookings for 2021 are up 33 percent. Plus, "we are still booking right now cruises for the fall of 2020, new bookings. So we know that people want to go."

If the relaunch of the limited fleet goes as planned, Waggoner would like to get American Countess, a gambling boat that has been completely transformed into a river cruise ship, launched and christened. Originally set to be christened in April in New Orleans, the 248-passenger ship has been ready to go, and Waggoner hopes to get it out on the Mississippi River by late July or August.

That leaves American Queen, the line's flagship, which is also the largest at 436 passengers. It will likely be the last to sail again, following the expiration of the CDC's order, Waggoner said.

"I know that people want to cruise," he said. "I know that they love our product. We have a very, very loyal clientele that loves coming back to American Queen Steamboat Company. From that point of view, I am optimistic about the future."