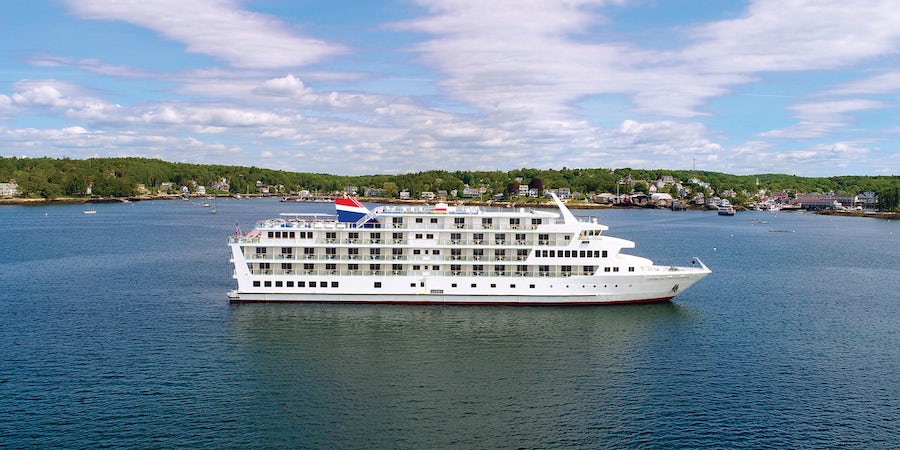 (10:55 a.m. EDT) -- American Cruise Lines, a U.S.-based company with a fleet of river and coastal cruise ships, aims to be the first to return to sailing, resuming operations June 20.

The line's 180-passenger ship, American Song, will begin sailing June 20 on the Columbia and Snake rivers in the Pacific Northwest. It then will follow on the Mississippi River with the 190-passenger ship American Harmony, leaving June 28 from Memphis.

Finally, the company hopes to sail in Alaska in late June and July on its 175-passenger coastal cruiser, American Constellation.

All passengers have been informed of the changes in advance, the line said. The line also has a Cruise With Comfort plan in place, allowing passengers to cancel within 24 hours for any reason before the trip.

“Our guests want to cruise," said Charles B. Robertson, President & CEO of American Cruise Lines. "There is a resurgence of demand to begin exploring this country, and as the largest American cruise line, we look forward to responsibly resuming travel.”

All three of the line's ships will voluntarily sail at 75 percent capacity. But even if they were full, they would still fall outside the current sailing moratorium set by the Centers for Disease Control and Prevention.

The current orders from the CDC prohibit cruise ships from sailing before July 24, or whenever approval is given to the lines' plans to rework the cruising experience to address COVID-19 concerns.

But those regulations specifically apply to ships that have more than 250 combined passengers and crew. American Cruise Lines, as well as a few other small ship and river companies in the U.S., have vessels that fall under that number.

While American Cruise Lines is not necessarily a household name in cruising, the family-owned company long has been a driver in American coastal and river trips. Its fleet of 13 river and coastal vessels are built at its own company, the Chesapeake Shipbuilding Yard in Salisbury, Maryland.

In the past few years, the line has released several modern-style river vessels that are modeled more on the riverboats that you might see in Europe, as opposed to paddlewheels. American Song, the vessel that the line is sending out first, is one of these modern ships; it was launched in 2018. American Harmony was built in 2019, and the coastal cruiser, American Constellation, came out in 2017.

When the ships are full, they have 350 square feet of passenger space per guest. With the capacity reduction, that will increase to 450 square feet per passenger, the line said. It will also allow crew members to have private accommodations.

The ships were also built with independent HVAC systems in every stateroom and lounge. While it’s unclear whether air conditioning ductwork contributes to the spread of COVID-19,  the ships have no shared ducting between rooms or public spaces, the line said.

The ships also have UV-C water filtration systems; while UV water filatration systems generally concentrate on keeping bacteria out of water, UV rays have been cited as a possible way to kill the virus. There's a touchless boarding and check-in process.

The new health and safety guidelines put together by American Cruise Lines are some of the most detailed that have been released by a cruise line to date. They include:

PPEs will be provided for all housekeepers, and passengers will have the same housekeeper for the duration of the cruise. Daily sanitation of all touchpoints in cabins, including doorknobs, light switches, sinks, balcony railings, thermostats, etc. A disposable cover will be applied to each TV remote control before passenger boarding.

The line has contracted its onboard medical services with Vikand Solutions, a global company that specializes in maritime and cruise health and safety measures. A resident nurse or EMT will be available on each ship, as well as a medical facility with supplies.

Passengers will be taken directly to the ship by private transportation, or the prearranged cruise hotel, if the hotel has suitable sanitation practices, the line said. A medical tent with pre-boarding screening will have a temperature check, with respirations and oxygen testing if needed. COVID-19 testing will be performed as needed on passengers who fail the temperature check.

In addition, COVID-19 quick test kits will be carried onboard. These will allow samples to be collected onboard if necessary and sent to facilities ashore for processing. The line has an "outbreak management plan" in place to respond to any confirmed COVID-19 cases onboard. A number of cabins on each ship will be sanitized and kept unoccupied in case they are needed for isolation. Evacuation plans to shoreside medical facilities will be in place for every port.

Cruising in the time of COVID-19 will start with a touch-free boarding and check-in process.

The main dining room capacity will be reduced, with tables and chairs removed for social distancing. All dining tables will only be used once during each meal service, with no multiple seatings at any table during any meal. Tables will be reduced to hold no more than four people, and items that were previously served communally, such as bread and wine, will now be individually served and poured. Chefs and galley workers will wear masks.

The Back Porch Cafe will operate as an additional dining option, and passengers can choose in-room dining on request. Breakfast service to private balconies will remain available.

Additional entertainment will be added so no one particular lounge ever gets crowded, and multiple shows will be performed. So when a musical act is playing, a lecture might be going on at the same time in another lounge, Robertson said.

American Cruise Lines will also keep its beloved cocktail hour. But the cocktails and hors d'oeuvres will be kept behind transmission barriers and passed to guests individually.

One question that many people have about cruising's return centers around masks. Whether masks will have to be worn will "depend on what hte risk profile looks like at the time of each cruise sailing," Robertson said.

"I think it's very likely that we'll have to require it worn at certain times, like boarding and unboarding the buses. Places where it will be especially difficult to mandate that people are always six feet apart. Or when people are right at the gangway and it's likely that there'll be in close proximity to a crew member who's assisting them with something.

When passengers leave the ship, the line says that all tour venues will be screened for social distancing and sanitation practices. Private coaches, which will be sanitized before boarding, will travel directly to and from each venue.

The line is also reducing the capacity on the coaches to allow for social distancing during rides.

The line is saying that excursion capabilities will be reduced to allow for social distancing. That might mean that additional excursion times will be added, so passengers can all take part.

The changes are being made not only to protect guests, but to assauge fears that communities along the rivers might have about an influx of tourists, Robertson said.

"Some towns expressed some concerns from the community about introducing people from other states and people that have been traveling. As they're being introduced into the community, it introduces risk. And that's true. So, we address how we're dealing with social distancing while they're in town. We're providing PPE to people that are going into town, even if they're just walking ashore."

As a cruise company that operates in the U.S., all of the crew on American Cruise Lines are American, as required by the Jones Act. The line notes that the same preboarding screening that guests go through applies to crew. Crew will also be screened at the conclusion of every cruise.

The crew will be trained to engage in social distancing at all times, including off duty. Their movements within public spaces will be reduced, and they will also have reduced shore leave, the line said.

Special COVID-19 identification training will be held for crew members, including how to observe and report symptoms, including their own. They will also be trained in COVID-19 response and the correct way to use and wear personal protective equipment.

In Europe, a number of German river lines are also planning an imminent return -- including A-ROSA, which states it will start sailing May 31 on the Rhine and Danube; and Scylla on June 1.

Both lines have outlined detailed new health and safety protocols, which include social distancing protocols for the entire ship, enhanced cleaning procedures; the wearing of mouth and nose coverings in public spaces; prescreening and temperature checks before embarkation; meals to be served at tables, at set times and excursion participant numbers will be reduced.

In addition, all A-ROSA ships are already equipped with an air ventilation system that ensures all cabins and public spaces operate using separate air supplies.

Scylla, which operates a number of ships for European companies including Nicko Travel, Globalis and VIVA Cruises -- as well as Tauck -- will operate at first solely on German rivers.

A spokesman said: "On June 1, our first trip from Passau to Dusseldorf takes its start. In the period after multiple other trips domestic German journeys start. We hope to scale up soon after that to international trips, but for this, we are still dependent on the international travel restrictions."

The VIVA cruises will be four-nights along the Main and the Rhine, catering solely to the domestic market.

It's not likely that Americans will be able to sail on these ships, though, given flight restrictions.

American Queen Steamboat Company, which sails similar itineraries to American Cruise Lines, is also looking to get its ships on the Mississippi River by the end of June.