You may also like
Dismiss
New Itineraries You Can Book for Summer 2020 and Beyond
Most Alaska Cruises Delayed Until At Least July
2020 Alaska Cruise Season Suffers as Cruise Lines Struggle With Deployment
Canada Bans Cruise Ships For Remainder of 2020 Cruise Season
Transport Canada Extends Ban On Cruises Until March 1, 2021
Bar Harbor Votes to Potentially Limit Cruise Ship Calls in 2021
What Happens To 2021 Alaska Cruise Tourism After Canadian Ban? Lines Weigh Land Trips, Small Ships Might Go
"Just Shook to my Core": How Small Ships and Amended Laws Might Save the 2021 Alaska Cruise Season
Royal Caribbean Announces 2022-23 Cruises From Boston, NYC
Transport Canada Updates Rules: Alaska and Canada Seasons Full-Steam Ahead 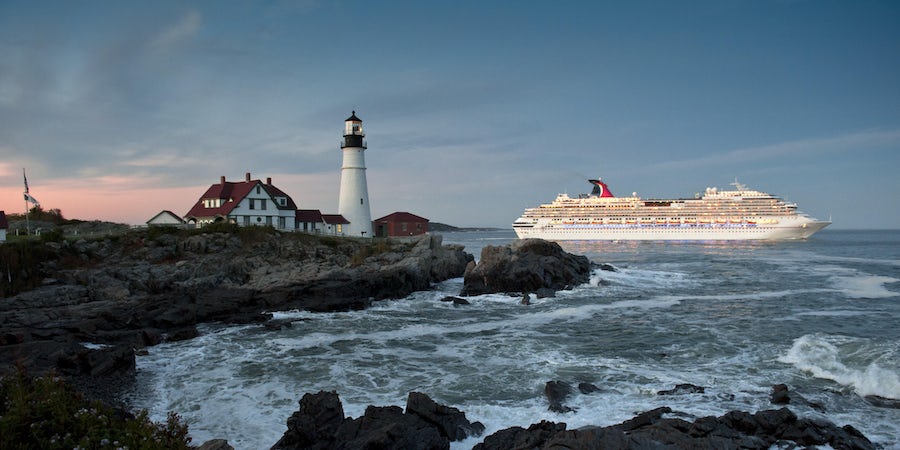 (2 p.m. EDT) – Ports along the U.S. East Coast and the Canadian Maritimes are reeling from a sharp drop in tourism and cruise calls, as the COVID-19 coronavirus pandemic cuts into the region's already-short season.

Typically running from late April until late October, the Canada and New England cruise season kicks into high gear in the fall, when people from around the world flock to the region to witness its legendary "fall colors" as leaves change during September and October.

In past years, however, the region has worked hard to expand its cruise season. Voyages to the Maritimes are popular during the summer months, and ports like Boston, Montreal and Quebec have established themselves as popular turnaround ports for other voyages, including transatlantic crossings and explorations of the U.S. eastern seaboard.

A multitude of factors are affecting the industry in the region, from cruise lines canceling sailings to regulations and local laws on both sides of the border. At stake: an economic driver that brings millions of dollars in associated revenue to cities and towns in both countries.

Montreal and Halifax, two of Eastern Canada's largest ports of call, have been affected heavily by the loss of cruise traffic. Montreal is utilized as a port of call and turnaround port on selected itineraries, while Halifax serves as one of the primary marquee ports on the traditional weeklong Canada & New England runs from both Boston and New York.

"Initially, we were projecting 203 vessels carrying approximately 350,000 cruise guests from April 11 to November 3, 2020," said Farguson. "We have lost a little more than half of our scheduled cruise calls since the start of the season was announced."

Farguson noted that the cruise industry brings about $170 million in economic benefits to Halifax and the surrounding area. With the loss of roughly half the expected cruise season so far, the Port of Halifax is estimating that that economic benefit will be similarly affected.

A similar situation is playing out in Montreal. The largest city in Quebec is a major turnaround hub for cruises along the St. Lawrence River and out into the Canadian Maritimes and beyond.

"The cruise season in Montreal is hard hit, as it is everywhere else in the world," says Mélanie Nadeau, Director of Communications for the Montreal Port Authority.

"At present, given that cruise ships cannot come to Canada until July 1 and given the cancellations recently announced by certain cruise lines for the entire season, 61,000 international passengers are expected to miss Montreal out of an initial total estimate of 97,000 passengers for the 2020 season."

Nadeau noted that some cruise lines have yet to cancel their scheduled calls on September and October. The Montreal Port Authority is waiting to see how the decisions of local government authorities may affect these calls. Cruise calls generate approximately $30 million annually in revenue for the city of Montreal.

Much like Alaska, cruise travel on the traditional Canada & New England itinerary is complicated by a myriad of factors. Not the least of which is the Passenger Vessel Services Act, which mandates than any foreign-flagged vessel departing from and returning to a U.S. port must first stop at a 'distant foreign port'.

This means that all cruise ships leaving from ports like Boston and New York must include a foreign port of call before returning. Calls on Halifax and Saint John, New Brunswick are popular choices. But with Canada closed to cruise ship travel until at least July 1 on the advice of Transport Canada, roundtrip voyages from the United States are, for now, an impossibility.

"As far as what happens after July 1, we will continue to monitor the situation and take direction from the Public Health Agency of Canada in consultation with Transport Canada regarding cruise operations at the Port of Halifax," Farguson said. "We have been working very closely with officials since the onset…to make the most of the remainder of the season. "

The U.S. Centers for Disease Control and Prevention has further issued a ban on cruises from the United States until July 24, as the result of a ruling that was issued on April 9. Any Canada & New England voyages, as the currently exist, would be unlikely to start before August.

One glimmer of hope - however small - would be the possibility that cruise ships could perform closed-loop voyages from Canada that do not visit the United States but instead rely solely on Canadian ports of call. Royal Caribbean had planned a handful of such journeys prior to the coronavirus pandemic aboard Empress of the Seas, which is still set to depart roundtrip from Montreal this September and October to ports that include St. John's and Corner Brook, Newfoundland; Sydney, Nova Scotia; Saguenay, Quebec; and Quebec City.

There is also the basic issue of the border between Canada and the United States, which remains closed to all nonessential air, land and sea traffic until at least June 21.

With the United States carrying a COVID-19 caseload of 1.5 million compared with Canada's 70,072 as of May 19, 2020, the border between the two countries will likely remain shut to nonessential travel for some time.

Maine: Not Ready for Cruises

Along the eastern seaboard of the United States, Maine has come out among the strongest opponents of cruise ships returning this season, with Bar Harbor and Portland electing to cancel calls throughout the spring and into summer.

The port of Bar Harbor, Maine is one of the most popular ports of call on the Canada & New England run. Nestled by the sea and graced with small-town charm, fresh lobster and nearby Acadia National Park, tourists around the world flock to the quintessential maritime town.

Concerned about being inundated with cruise ship passengers potentially carrying COVID-19, Bar Harbor council moved quickly and early to cancel all cruise ship calls through the end of June, citing vocal opposition from residents. Much of council was quick to agree, though

quoted Councillor Gary Friedmann as saying  that it was important to look at the big picture, noting that plenty of tourists arrive in Bar Harbor by means other than cruise ships.

All cruise ship calls up to and including August 31, 2020 have since been cancelled by Maine governor Janet Mills,

according to the latest

Maine officials have indicated that no ships carrying over 50 people this summer will be allowed to call on ports in the state. That directive won't be revisited until September.

"While this statement does not entail an outright cancellation of remaining calls on the schedule for July and August, it does suggest they are unlikely to be permitted given the anticipated restrictions outlined in Maine's phased reopening," Sarah Flink, spokesperson for CruiseMaine, tells Cruise Critic. "It may be possible to see some limited return of cruises this fall, as part of the industry's phased resumption of sailing. At this point, however, it's too early to say whether all the cards will fall into place for that to happen in 2020."

Bar Harbor was expected to have 199 cruise ship calls and 299,432 passengers this year -- roughly twice what larger Portland, Maine was scheduled to welcome. Following the cancellation of all calls until September 1, the last ship on the town's 2020 cruise schedule is Silversea's Silver Whisper, currently scheduled to anchor in Frenchman Bay off the town center on Tuesday, November 3.

on the economic impact of the cruise industry in Bar Harbor noted that "cruise ship passengers   had an estimated annual economic impact…of $20.2 million in local spending, 379 jobs (full-and part-time, and seasonal) and $5.4 million in labor income." That was in addition to the $686,472 worth of passenger fees collected by the Town of Bar Harbor in 2016.

"In addition to the valuable economic impact cruisers bring during the fall "shoulder" season, cruise also brings many first-time visitors to the state, hailing from a wide geographic range across the U.S. and even internationally," says Flink. "This kind of exposure to new visitors, particularly from afar, builds Maine's profile as a world-class destination."

A similar economic impact will be felt in big cities on the eastern seaboard. Boston -- which started courting cruise operators in 1986 with the opening of Cruiseport Boston and a 13-ship inaugural season -- was expecting record numbers of passengers this season following 2019, where the port welcomed over 400,000 passengers for the first time.

Cruiseport Boston was poised to have four cruise lines homeporting in Boston for the first time ever, with Celebrity Cruises joining Holland America Line, Norwegian Cruise Line and Royal Caribbean in offering voyages that depart from Boston.

"The demand for cruising in New England continues to be strong and attracts visitors from all over the world", said Massport Port Director Mike Meyran in a December 2019 press release on the cruise port's season. "We are making smart investments at the Flynn Cruiseport Boston to maximize the use of the terminals and accommodate future growth in homeport and port-of-call passengers."

The enduring popularity of the Canada & New England itineraries, along with their newfound resilience to operate in months that were once considered an unthinkable shoulder season, should help ports along Eastern Canada and the United States weather the storm. But like most travel sectors impacted by the effects of the COVID-19 coronavirus pandemic, recovery could be a slow, multi-year process.

"When the time is right, CruiseMaine hopes to see a strong return of cruising to our state and our region, though we all appreciate that it will take time to define and implement what is sure to be a "new normal" both on and off the ship," says CruiseMaine's Sarah Flink.

"We know that the return of cruising in Maine will require a great deal of community engagement and education. Our cruise line partners know we will need their support in rebuilding the confidence of our local residents and elected officials, and we all agree that the first step in this rebuilding effort will be clarity and transparency about the new health and safety protocols once they are ready."

For the Port of Halifax, any return to operations is also contingent on the Port being able to provide the same quality service it has been providing to passengers for decades now.

"While the future of 2020 is uncertain, the Halifax Port Authority understands the importance of Halifax as a marquee cruise port not only for the cruise industry but also for the greater economic contribution to Atlantic Canada," concludes Halifax's Farguson. "The return of cruise will be important to stimulating the economic recovery of the tourism and hospitality industry, and the many associated small tourism-based businesses in Atlantic Canada."

"Cruise passengers can rest assured knowing they will be greeted warmly, and experience that legendary Nova Scotia hospitality that our tourism sector is built on," says Farguson.