You may also like
Dismiss
The Best – and Worst – Cruise Experiences of 2018
Cruise Industry Donates Millions to Hurricane Dorian Relief Efforts in The Bahamas
Coronavirus: Updated Cruise Ship Policies and Cancellations Because of COVID-19 (2021)
Coronavirus Impact on Travel Causes Most Cruise Lines to Suspend Worldwide Operations
What New Health Protocols Are Cruise Lines Introducing?
Which Cruise Ships Will Be Scrapped Or Taken Out of Service Because of the COVID-19 Pandemic?
COVID-19 Passenger Outbreaks Take Place On Two International Cruise Lines
Cruise Lines Continue To Cancel Sailings Further Into 2021
JLo Joins Virgin Voyages As Investor and Advisor in Modernized Godmother Role
Virgin Voyages Second Cruise Ship Valiant Lady Arrives in London Ahead of UK Tour 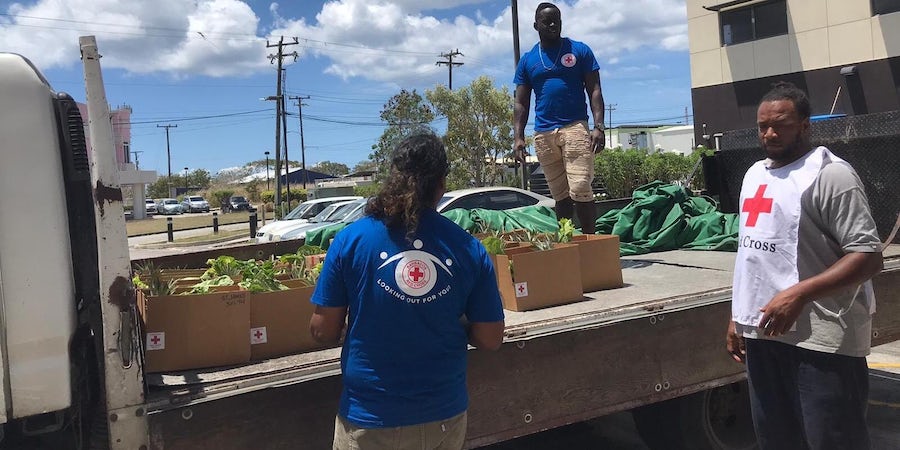 (12:10 p.m. EDT) – With empty ships in ports and no passengers to serve food to, a number of cruise lines have donated their excess food to local charities.

Fred. Olsen Cruise Lines, Hurtigruten and Windstar have all donated food to a variety of different charities after the lines suspended operations.

After Braemar was forced to end its last sailing in Cuba, rather than its scheduled port of Barbados, which refused it permission to disembark, the cruise line was left with an entire container -- comprising 18 pallets / 17,598 kilograms of chilled fruit and vegetables -- waiting in Barbados for the ship's scheduled turnaround.

"We did not want this container of perfectly good fresh produce to go to waste, as there are so many deserving causes in Barbados, and we knew that they could make use of it to benefit a great many local people in these difficult and challenging times," said Peter Deer, managing director of Fred. Olsen Cruise Lines.

"We are just happy that we were able to help to make a difference on the island in this small way, and we thank our partners in Barbados for making this happen."

At present, Fred. Olsen plans to resume services on May 23.

Even though there have been no confirmed or suspected cases of coronavirus on any Hurtigruten ships, the line followed the lead of most other lines in the world and temporarily suspended operations last month.

The initiative to help out land-based organizations originated from crew members who reached out directly to charities such as The Salvation Army in Alesund, the local hospital in Hammerfest, The Church City Mission in Tromso, and a Volunteer Center in Sortland.

Among the food Hurtigruten distributed were several pallets of vegetables and large quantities of eggs, milk, yogurt and other dairy products and food items.

"The fact that this is an employee initiative makes me exceptionally proud," said Hurtigruten Chief Commercial Officer Asta Lassesen. "To me, this is true proof of how Hurtigruten is more than just a visitor at the destinations we sail to; we are a guest that gives back to all communities we visit."

Hurtigruten has two ships still operating, but they are just delivering essential supplies to communities along the Norwegian coastline.

At present, the line plans to resume its coastal voyage service on April 18 and its Expedition ships on April 29.

In the meantime, you can always relive -- or experience for the first time -- Hurtigruten's Coastal Voyage in its sublime entirety on TV.

The Royal Caribbean-owned Spain-based line Pullmantur has donated 13 tons of food from its two ships -- Sovereign and Monarch -- to Malaga City Council in Spain, and the Government of the Colón Province, Panama.

In a statement, President and CEO of Pullmantur, Richard J. Vogel: "It is food -- perfectly fit for consumption -- that we had onboard the Sovereign and Monarch and that we wanted to donate to help families facing difficult situations right now.

"As a company it is always our duty to act in a responsible manner, taking people into account and adding value in one way or another. We will continue to look at possible opportunities to make new food donations."

Windstar Cruises donated seven pallets of fresh produce and dairy to Feeding South Florida in Pembroke Park, near Miami, Florida. The non-profit organization is part of the Feeding America network, one of the largest hunger-relief organization supporting food banks, pantries and meal programs throughout the United States.

The pallets of fresh produce and dairy were bound for Windstar's 342-guest motor sailing yacht Wind Surf in the Caribbean.  With operations temporarily shut down due to the novel coronavirus, the company reached out to find an organization in Florida that could accept the perishable food donation worth \$8,000.

"We're finding a silver lining in this abrupt cancellation of operations," said Chris Prelog, Windstar's chief operating officer. "We're happy to donate it; we don’t want this good food to go to waste."

Other lines have been coming up with inventive things to do with their ships including offering them up as hospitals, lighting them up with messages of hope and posting videos about what the crew are getting up to when there are no passengers onboard.