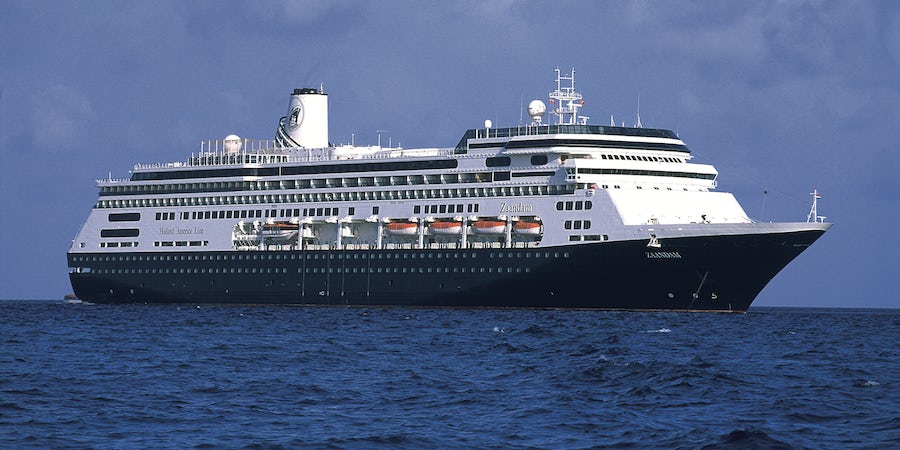 (5:25 p.m. EDT) -- Holland America Line's Zaandam and fleetmate Rotterdam successfully berthed at Port Everglades today to discharge and repatriate passengers aboard the ships, some who had fallen ill with the COVID-19 coronavirus.

The docking comes after substantial pushback from local and state officials countered by pleas from Holland America executives and many others that letting the passengers disembark was a humanitarian issue.

There are 808 passengers and 583 crew on Rotterdam, and 442 passengers and 603 crew onboard Zaandam. The ships, which carry a total of 305 U.S. citizens and 247 Canadians, plus a mixture of other nationalities, had been seeking a safe place to dock for nearly three weeks in order to get the original passengers from Zaandam home and acquire treatment for passengers ill with the COVID-19 coronavirus.

Four passengers on Zaandam died during the time that the ship was refused entry into ports in South America, following the attempted termination of its voyage March 13. The COVID-19 coronavirus has been blamed for the death of two, while the cause of death for the other two passengers has not been confirmed. The line transferred healthy passengers over to sister ship Rotterdam off the coast of Panama before transiting the Panama Canal.

In a repatriation plan released by Port Everglades just before the ships docked, the line noted that 107 passengers reported influenza-like illness during the voyage. Ten passengers on Zaandam and three on Rotterdam have been hospitalized onboard, with need for care shoreside; all 13 have been confirmed to be taken into hospitals nearby. A total of 143 crew have reported flu-like illness during the voyage, with only one needing shoreside care.

A full 1,211 passengers from both ships, as well as 1,136 crew, have been deemed fit for travel. Healthy crew, however, will be staying onboard.

Zaandam was originally scheduled to arrive April 7 in Port Everglades at the conclusion of a 31-day voyage that began March 7 in Buenos Aires. That voyage left before the issuance of any official guidance on cruises from the U.S. government, with the first statement -- an advisory -- being issued March 8.

Holland America Line temporarily paused its global operations March 13, 2020. Zaandam attempted to disembark all passengers March 15 in Chile but was refused entry by authorities. The ship then unsuccessfully attempted to dock in other ports along the coast of South America.

A total of 411 passengers were booked on the full 31-day voyage, while the remaining passengers were scheduled to sail a shorter 14-day itinerary ending in San Antonio, Chile.

Zaandam was originally scheduled to go into dry dock for two weeks at the conclusion of its voyage and then return April 21 to Port Everglades for a repositioning cruise to Canada.

Holland America Line has been sailing from Port Everglades since the 1930s. Zaandam was christened in Port Everglades in 2000, and the ship is a regular customer of the port during the winter months.

Florida Governor Ron DeSantis and Broward County have come under fire for their handling of the situation after DeSantis told Fox News he didn't want "foreigners" entering South Florida.

"It turns out there are American citizens, and we actually have Floridians onboard" DeSantis conceded.

Broward Unified Command, an organizational group made up of nearly a dozen different agencies -- including the U.S. Centers for Disease Control and Prevention, the Florida Department of Health in Broward County, the U.S. Coast Guard, U.S. Customs & Border Protection, Broward Sheriff's Office Departments of Law Enforcement and Fire Rescue, Broward County Emergency Management, the Port Everglades Pilots Association, and Broward County Port Everglades Department -- reviewed the plans for docking both Zaandam and Rotterdam, and repatriation of all passengers onboard, that were submitted by Carnival Corporation, parent company of Holland America.

Broward County's Unified Command had asked Holland America and Carnival Corporation to draw up plans that satisfied a list of a dozen different directives, including the line's provision of personal protective equipment (PPE) to all responders and temperature readings for all disembarking crew and passengers before passing through U.S. Customs and Border Patrol.

Other Florida entities have since followed suit, in terms of asking for concrete docking plans from the cruise lines. Jacksonville Mayor Lenny Curry issued a statement on Twitter saying, "I will oppose any cruise ships with COVID19 positives docking in Jacksonville until authorities can demonstrate strict measures that keep the people of my city safe from any infections on the ship."

In the repatriation plan, Holland America outlined all the steps it would take to get passengers and crew off the ship, without exposing others to COVID-19 or increasing community spread.

As a condition of being allowed to berth in Port Everglades, Holland America will be taking the vast majority of passengers -- the ones who are asymptomatic (1, 211 in all, or 97 percent of the total passenger count) -- from both ships and placing them on privately chartered buses. They will then be driven directly to the airport tarmac, where they will board chartered repatriation flights to prevent any chance of community spread of coronavirus in the local area.

"Out of an abundance of caution, these guests will be transported in coaches that will be sanitized, with limited person-to-person contact and while wearing masks," said a statement by Holland America Line. "These provisions well exceed what the CDC have advised is necessary for their travel. Guests have not left the ship since March 14 and have self-isolated in their staterooms since March 22."

Flights are scheduled to depart on April 3 and 4, with passengers remaining onboard both vessels until just prior to their flight times. Per CDC guidelines, passengers will be provided with face masks to be worn during disembarkation, transportation and onward flights home.

Charter flights will leave from Fort Lauderdale-Hollywood International, with passengers boarding on the tarmac. They will fly to destinations that include Atlanta, San Francisco, Toronto, Frankfurt and London.

All 13 passengers who have been hospitalized on the ships have officially been confirmed for shoreside care. Ten are being taken to Broward Health Medical Center, and the others will be cared for at Larken Community Hospital, according to the repatriation plan.

Once general disembarkation is complete, both Zaandam and Rotterdam are to depart Port Everglades, where they will anchor offshore until those 45 guests onboard who are too ill to travel fully recover, along with all crew members.

Passengers with residences in South Florida will be driven home to begin their mandatory 14-quarantine as directed by the CDC.

A Twitter post from Michael Udine, Broward County Commissioner, District 3, states that Holland America and Carnival Corporation will pay for all costs associated with these efforts.

Another cruise ship, Princess Cruises' Coral Princess, is bound for Fort Lauderdale after having been denied permission to disembark guests in Buenos Aires. Coral Princess is a regular tenant of Port Everglades and was scheduled to operate a voyage from Buenos Aires to Fort Lauderdale on March 19, originally arriving in Port Everglades on April 7.

Like Holland America, Princess Cruises falls under the Carnival Corporation umbrella, headquartered in nearby Miami.

Coral Princess, which has also been at sea for several weeks seeking to discharge passengers who boarded before the global suspension of cruising, is due to arrive Saturday in Port Everglades. A statement issued by Princess Cruises says a total of 12 positive cases of COVID-19 (seven passengers and five crew) were found onboard.

There are currently 1,898 people onboard Coral Princess, including 1,020 passengers and 878 crew members. Passengers are continuing to isolate in their staterooms, and Princess states it has developed its procedures in accordance with direction from the CDC.

Besides the passengers on these cruise ships, there are some instances where crew, who had still been working on cruise ships resting in anchorages off the coast of Florida and the Bahamas, have been getting sick. This week, the U.S. Coast Guard issued a warning that it will require foreign-flagged ships to care for COVID-19 patients onboard "for an indefinite period of time" or seek support from those other countries first, instead of the U.S. Traditionally, people who are ill on ships, including passengers and crew, have been medevacked by the Coast Guard to the closest medical facility.

Currently, the only large-scale U.S-flagged cruise ship is Norwegian Cruise Line's Pride of America, based year-round in Hawaii.