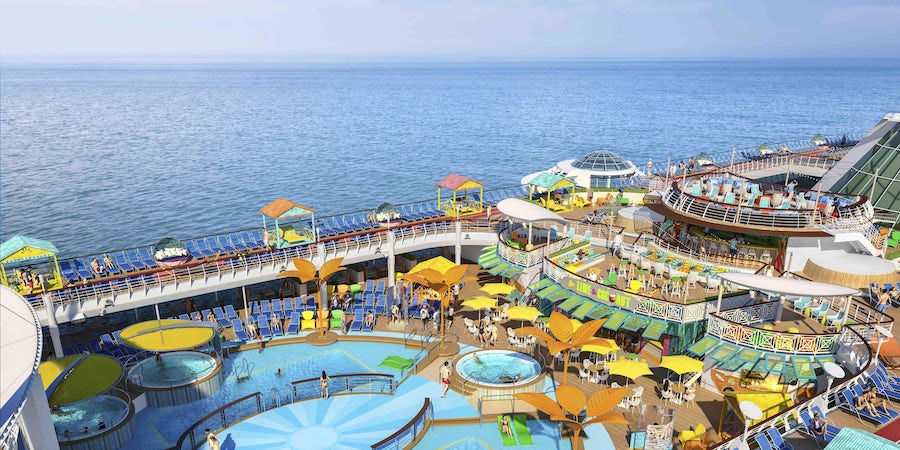 A reimagined pool deck on Freedom of the Seas. (Photo: Royal Caribbean)

A reimagined pool deck on Freedom of the Seas. (Photo: Royal Caribbean)

(5:30 a.m. EST) – Royal Caribbean’s recently-revitalized Freedom of the Seas has returned to San Juan, Puerto Rico, where it operates cruises to the Southern Caribbean.

The $116-million upgrade added new thrills and amenities to the 3,934-passenger ship, including a completely redesigned pool deck featuring The Lime & Coconut Bar; an expanded selection of seating options with the addition of casitas, in-pool loungers and day beds. Kids can now enjoy the new Splashaway Bay water park and adults can enjoy the rejuvenated Solarium.

On the food and beverage front, Giovanni’s Italian Kitchen, El Loco Fresh, Izumi Hibachi and Sushi and Playmakers Sports Bar and Arcade were all added to Freedom of the Seas.

The ship also offers a new nightclub for Teens called Social033 that features a new private outdoor deck space in addition to movies, games and music; a complete transformation of the Adventure Ocean facilities for kids and tweens; and a new onboard laser tag adventure called Clash for the Crystal City.

The 2006 built ship has also been added to Royal Caribbean’s digital app.

The refit of Freedom of the Seas is part of a $1-billion-dollar investment in Royal Caribbean’s fleet, which will see 10 ships extensively refitted in four years, with enhancements that touch nearly every facet of the guest experience.