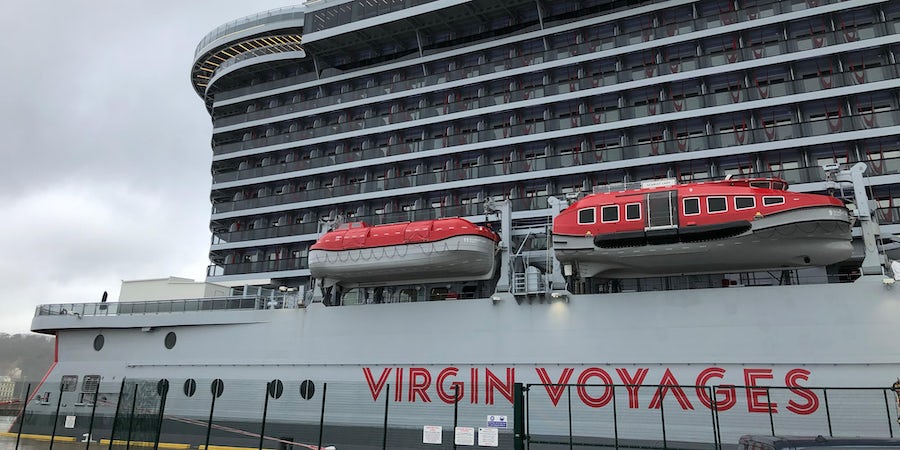 (12:32 p.m. EST) -- Virgin Voyages' much heralded ship, Scarlet Lady, made its debut in a wet and windy Dover, England on Friday.

The U.K. port is the first stop on a "World Tour," which takes in Liverpool before it heads to Miami. A christening is expected to be held in mid-March before the ship embarks on four- and five-day Caribbean itineraries.

Cruise Critic was among the very first onboard to find out whether Scarlet Lady really is ready for its close up.

More Than a Gimmick

Scarlet Lady pioneers a number of firsts at sea -- the first tattoo studio at sea, Squid Ink; the first Korean barbeque at sea, Gunbae; drag queen brunches; and "all gender" restrooms. The ship also features some of the most extraordinary theatrical experiences we've ever seen on land or sea.

If you're cynical by nature, you might dismiss all this as gimmickry, designed to grab headlines and look good on Instagram. In some ways it is; the Virgin brand has never been shy about embracing whatever is new, hip or on-trend.

But despite this, and after almost a full day onboard, we're convinced Scarlet Lady is more than just a bunch of gimmicks, and that Virgin Voyages has created something genuinely different.

Scarlet Lady is not a ship for the fainthearted; it's unashamedly showy, loud and look-at me: if it was a person, it would be taking a selfie. Furthermore, the ship has a vibe we haven't experienced at sea before, a unique blend of achingly hip (think W Hotel) and upmarket hostel chic (a la the Generator hostel brand).

If you're not sporting a beard or a tattoo, you're going to stand out.

So who will like Scarlet Lady -- and, perhaps more importantly, who can afford Scarlet Lady? (The almost all-inclusive dining, Wi-Fi, drinks and gratuities do not come cheap.)

Here are a few of our first impressions of the ship, and who, ultimately we think will embrace the brand.

Designed for travelers who don't want to be herded into a single dining venue, Scarlet Lady has no main dining room. Instead, there are 20 eateries, each with its own dining hours, giving cruisers (the line calls them "sailors") more flexibility about when and where they eat.

With that said, the ship does have a buffet, despite Virgin Voyage's claims it doesn't. The Galley, which Virgin refers to as a food hall concept, is exactly the same cruise ship buffet you'll find across the industry.

But even if the Galley is the same-old, there are new-to-the-industry concepts we found intriguing.

First, there's the bizarrely misnamed Razzle Dazzle, an all-vegetarian restaurant that permits diners to meat it up if they want to. Then there's the aforementioned Gunbae, which is the first Korean BBQ at sea. We missed the former, but tried the latter.

Gunbae has a Teppanyaki feel to it, with communal tables (if you're a party of less than six you'll have to sit with strangers) and we predict it will be a big hit, with a fun atmosphere and lots of interaction between diners and the servers.

Cabins (or rooms, as Virgin insists they be called) are a mixed bag, with a modern, but sparse look popular with hip hostels and urban boutique hotels. The beds, most of which are actually L-shaped sleeper sofas that transform into beds at night, are narrow; there's limited storage space and the "desk" reminded us of IKEA tables designed for too-tiny city apartments.

(The rooms aren't the only place we questioned the line's aesthetic choices. The ship's exterior is gunmetal gray, which had us in mind of a naval ship when we first saw it. Even with the few splashes of red, we found it too austere and stark.)

On the plus side, we loved the hammocks on the balconies (80 percent of rooms have balconies -- or terraces in Virgin lingo) and the fact the bedroom turns into a living room during the day, with the L-shaped beds becoming sofas, freeing up a lot of space. And, befitting a cruiser who needs to be always Insta-ready, there's plenty of places to charge devices, too.

The bathrooms are small, but we loved the swing-both-ways glass doors and rain showerheads in the showers.

By contrast, the suites are over-the-top, with the biggest -- the Massive Rock Star Suite -- boasting a guitar room (or a second bedroom if you'd prefer), a huge living room complete with turntable and vinyl collection; a master bedroom with a king-sized bed; and an ensuite, all marble bathroom with a "peekaboo" shower.

The terrace in the Massive Rock Star Suite has a hot tub and a dining table, complete with stairs should you wish to dance on it (a la Richard Branson). Perks include a roadie at your beck and call, and a rider, if you want just green M&Ms.

Pricing wise, this suite is inaccessible to most cruisers, as you'll need to pay a vast sum for this level of indulgence, with three-night sneak-a-peek sailings going for upwards of $24k per person.

All About the Nightlife

It's a double height space, accessed by a discombobulating, light-filled corridor that leads onto the main dance floor, complete with raised stage. The sound system is booming and the light show is incredible; if Virgin really is able to fill the ship with the cruisers it wants, this space will be packed till the early hours.

The theater is also like nothing we've seen on a ship before, with moveable seats which are like bleachers facing each other with the audience looking down onto a rectangular stage, which can be flattened to blur the divisions between the performers and the audience begins.

It's bold, daring and genuinely different and based on the two shows we saw, genuinely ground-breaking.

The inclement weather in Dover meant we spent little time outside, but we did see the main pool deck, which left us confused and wondering what Virgin was thinking. The main pool, as it is, is little more than a plunge pool, smaller than we'd expect to see on a ship a quarter of the size!

Shallow slopes encircle the pool, presumably for people to lounge on and keep cool, but the pool itself is tiny. Considering how much time and thought went into the rest of the ship, the pool almost seems an afterthought.

Putting aside the silliness of Virgin's refusal to use traditional cruise terminology (sailors vs passengers, voyaging vs cruising, terrace vs balcony), Scarlet Lady is a ship like no other we've seen.

It's not for everyone, but Virgin doesn't care. This is a brand that doesn't do vanilla and Virgin Voyages has made it clear it doesn't want to appeal to everyone.

Yes, Scarlet Lady does try too hard at times, and there will be times you will want to find a quiet spot and relax with a cup of coffee without being assailed by dance music, or sip a beer rather than a hand-crafted cocktail made by a tattooed, bearded mixologist.

But you know what? It works. Virgin Voyages is daring to be different, and perhaps we needed Virgin to do this.

It just may be the perfect ship for a new generation of cruisers.