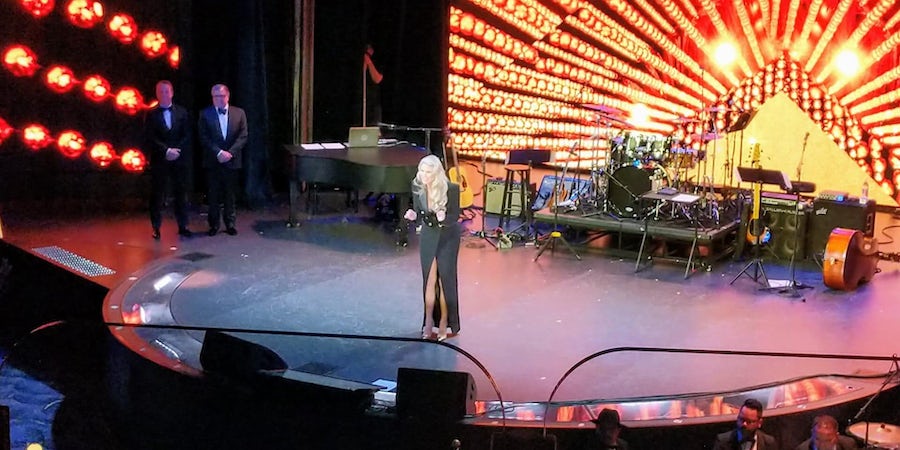 After saying the traditional cruise dedication, "May God bless her and all who sail on her," the godmother led a countdown, and a bottle of Champagne went smashing into the hull of the ship. Four-time Grammy Award-winner Seal capped the evening with a surprise concert in the ship's main theater.

The black-tie ceremony took place in Miami, in front of travel advisors, media and Regent Seven Seas employees and executives, and VIPs, including the company's most-loyal passengers.

Del Rio kicked off things, welcoming those watching live in the theater as well as those streaming the event from around the world. He also used the opportunity to pay special tribute to Seven Seas Splendor Captain Serena Melani, the first female to helm a ship straight from the shipyard. Del Rio noted that in the male-dominated maritime world, Melani had to work even harder.

"Do you know how good she has to be to be the captain of a ship coming out of a shipyard?" he asked.

Gimenez thanked Del Rio for bringing another ship -- and the accompanying jobs -- to Miami, and Montague took time to thank the crew onboard all of the line's ships as well as Regent Seven Seas' loyal passengers.

"You are all the reasons why we drove to perfect luxury on Seven Seas Splendor," Montague said.

Melani told the audience about how connected she felt to the ship, calling it her baby. (And jokingly apologizing to Del Rio, who also called the ship his baby.) The gravity of her ground-breaking accomplishment was not lost on the Italian captain, who said "My achievement should serve as proof that you can do anything" with perseverance and hard work.

Following blessings by a rabbi and archbishop, Brinkley took the stage to perform her godmother duties.

Brinkley, too, talked about how proud she was to be associated with a ship captained by a trailblazer, saying she also strives to be a woman who inspires other women. Rejoined onstage by Del Rio, Montague and Melani, Brinkley recited the blessing and christened the ship.

Before the naming ceremony, Brinkley met with a small group of journalists, speaking about how honored she was to be selected, noting that it's a bit like being a good-luck charm for the ship. She also said her parents used to cruise on Regent Seven Seas ships, and "if they were here today, they'd be so proud."

Brinkley talked about her connection to the sea, saying she first was on a boat when she was 18 and traveling to Greece. She has a boat of her own and said she used to build boats with her then-husband Billy Joel.

"I really love being near the water and on the water," she said.

Speaking about the ship, Brinkley said it has surpassed her expectations in part because of the attention to details, including the marble inlay details in and an enormous dragon sculpture in restaurant Pacific Rim.

"You definitely feel the quality in everything they do. … There's not a boring spot on the boat," she said.

The 750-passenger Seven Seas Splendor is the fifth ship in luxury line Regent Seven Seas' fleet. All of the company's ships are 750 ships or smaller and sail to off-the-beaten path destinations that aren't reachable by larger cruise vessels. A near-twin to Seven Seas Explorer, which the company called the most-luxurious ship in the world when it debuted, Splendor offers spacious suites, multiple restaurants, an extensive, curated onboard art collection, and high-end touches such as 500 crystal chandeliers and more than an acre of Italian marble. The ship made its debut earlier this month in Europe, where Cruise Critic was onboard to explore the ship.