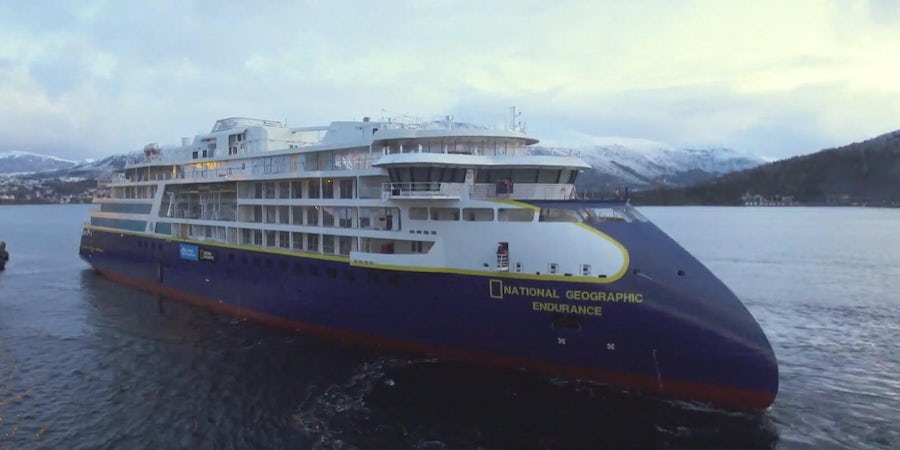 The float out of Lindblad's National Geographic Endurance at the Ulstein Verft shipyard in Norway on Dec. 7. (Photo: Lindblad Expeditions)

The float out of Lindblad's National Geographic Endurance at the Ulstein Verft shipyard in Norway on Dec. 7. (Photo: Lindblad Expeditions)

The 126-passenger ice-strengthened expedition ship will be the first of two purpose-built vessels to enter service for Lindblad and mark the line’s first-ever polar new-build. National Geographic Endurance is fitted with the distinctive swooping "X-Bow" technology that promises a better ride and less vibration in heavy seas, along with better fuel efficiency and reduced environmental impacts.

The ship will also be fully ice-strengthened, and will feature a PC5 Category A Ice Class rating -- among the highest of any passenger vessel.

It is named after polar explorer Ernest Shackleton’s pioneering ship, Endurance, which was launched in 1912 and was used by Shackleton on his famous 1914 Trans-Antarctic Expedition.

Sea trials mark an important milestone in the construction of any new vessel, as the ship's technical and handling capabilities are fully tested. National Geographic Endurance will return to the shipyard for final outfitting before entering service in the Far Arctic this April.

A sister-ship, National Geographic Resolution, will set sail in 2021.