You may also like
Dismiss
Cruise Industry Donates Millions to Hurricane Dorian Relief Efforts in The Bahamas
After the Storm: What Cruisers Should Know About the Bahamas and Hurricane Dorian
Live From Hong Kong: Coping With the Coronavirus on a Cruise
Cruise Ports Affected by Canceled Sailings Due to Coronavirus; Several Ports Closed
Chinese Passengers on Anthem of the Seas Did Not Have Coronavirus, Ship To Resume Sailing
Cruise Ships Redeploy From Asia
Do Cruise Lines Have Age Restrictions Due to Coronavirus? Your Questions Answered
Norwegian, Royal Caribbean Team Up To Create Cruise Health and Safety Protocols
Princess Cruises Largely Cleared by Australian Authorities Over Ruby Princess COVID-19 Outbreak
Cruise Lines Continue To Cancel Sailings Further Into 2021 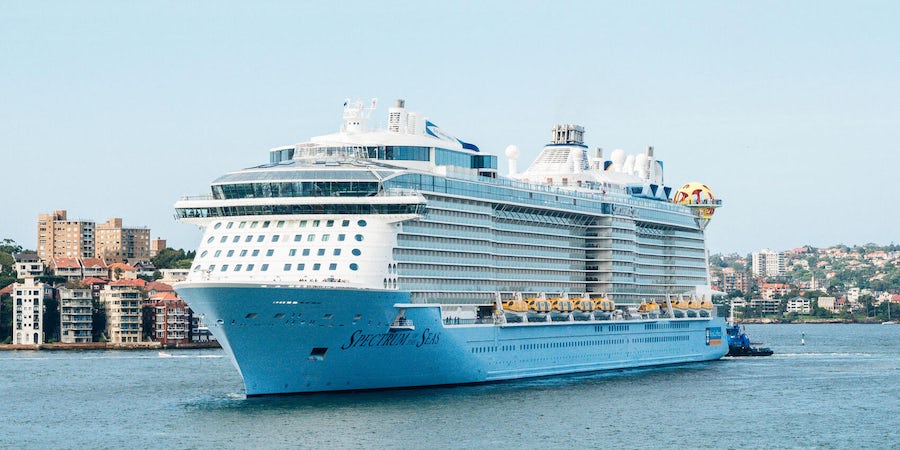 Spectrum of the Seas in Sydney (Photo: Royal Caribbean)

Spectrum of the Seas in Sydney (Photo: Royal Caribbean)

(Updated, 12:49 a.m. EST) – Royal Caribbean Cruises Ltd. is sending two of its vessels -- one from Royal Caribbean and one from Celebrity -- on a series of humanitarian voyages in Australia and the United States, along with the donation of one million masks to China to aid in efforts to combat the coronavirus outbreak.

The newest ship in Royal's fleet, Spectrum of the Seas, was redeployed to Australia in late February 2020, offering three complimentary cruises to the region's volunteer community who have been instrumental in handling the country's recent bushfire crisis.

Spectrum of the Seas’ first free cruise set sail from Sydney on February 29, followed by a second cruise that departed March 7. A third cruise, scheduled for March 11, was later added to cater for demand.

The line worked with volunteer agencies to encourage eligible 'first responders' to register. More than 12,000 applications were received, with people asked to write 150 words on why volunteering was important.

The winners were accommodated in balcony and outside cabins (no insides) and solo passengers were given their own rooms. Wine and beer are being served free of charge with all meals in the main dining rooms. Soft drinks, tea, coffee, bottled water are aso included. Passengers can also enjoy free access to activities such as the iFly Ripcord flying experience, Flowrider surfing pool, SeaPlex games arcade, Sky Pad virtual reality platform, North Star and dodgem car rides. Wi-fi is offered at a discounted price of $5 per day and there is a 30 per cent discount on all alcoholic drinks.

“We are in a fortunate position to give back to the brave and dedicated members of our community and their families by presenting them with the chance to join us for a few days to relax, unwind and enjoy our hospitality,” said Gavin Smith, managing director for Royal Caribbean International Australia and New Zealand.

Celebrity Cruises also announced that it intends to deploy Celebrity Millennium on a series of short Pacific Coastal sailings from Los Angeles prior to the start of its 2020 Alaska season from Vancouver. The line will also be hosting a number of 'Cruising for Heroes' sailings in March and April in support of California's firefighters, first responders, and veterans.

"The women and men of Celebrity were keen to have this opportunity to give back, even though this repositioning presented a challenging timeline," Richard Fain, Chairman and CEO of Royal Caribbean Cruises Ltd., said. "We know the hard work and sacrifice of those who have been keeping Californians safe, and it feels good to be able to say 'thank you.'"

Full itinerary and charity details are expected to be announced next week. Bayley noted that Royal Caribbean also plans to send a ship to China to provide complimentary cruises for first responders there who have aided in the efforts to fight the outbreak of coronavirus.