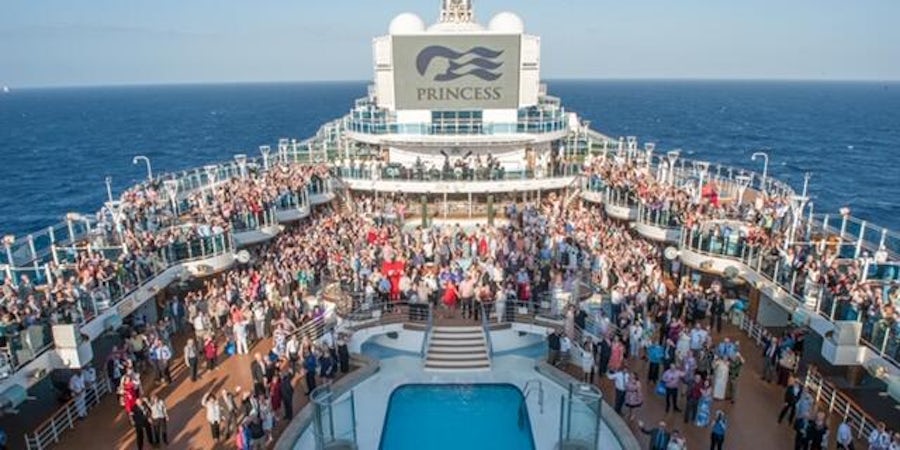 When Princess Cruises asked Cruise Critic to be a part of an attempt to set a Guinness World Record for the largest vow renewal ceremony across multiple venues, we knew there was no saying no. Add in a ceremony officiated by "Love Boat" actors Gavin MacLeod (Captain Stubing) and Jill Whelan (Vicki) and we knew we were in for a treat.

Thus, we found ourselves at sea a few days before Valentine's Day on hot, muggy afternoon aboard Regal Princess, saying I do. We weren't alone, as Princess had similar ceremonies going on simultaneously on Crown Princess and Royal Princess, in the Southern Caribbean and the West Coast, respectively.

When all was said and done, 1,443 couples across three cruise ships participated in the vow renewal, surpassing the goal of 1,201 and setting a new world record. (There was no previous record for largest vow renewal ceremony across multiple venues, so the goal was based on the record for a single venue.)

On our ship, Regal Princess, more than 600 couples packed onto the pool deck, braving the heat. The other 800 or so couples on Crown and Regal Princess had it a little easier; on Crown, which had the fewest number of couples renewing their vows, the ceremony was actually held in an air-conditioned lounge.

Couples came in all ages, from a pair in their 20s, just four days into their new marriage to those in their 80s married more than 50 years.  The four-day newlyweds weren't even the most recently married -- that honor went to an Australian couple that had been married by the captain of the ship just two hours prior to the vow renewal ceremony.

They came in all variety of outfits, from shorts and tees to wedding gowns and tuxedos. We spotted more than a few women in wedding dresses, and several men in formal military uniforms, medals and all. Many had never renewed their vows, others were renewing for a second or third time. And most we spoke to had chosen this sailing specifically to be part of the world record attempt.

Despite the heat, spirits were high when MacLeod and Whelan finally came out to the podium to start the ceremony. Packed shoulder to shoulder, couples faced each other and held hands, repeating a simple set of vows to always be there for one another. A quick kiss, a first waltz and it was over -- time to see if the record had been set.

In order to fulfill Guinness' strict requirements for a world record, each ship carried an adjudicator to oversee the attempt.

Among the requirements: All three ceremonies needed to start at exactly the same time; all couples had to submit their marriage certificates ahead of the cruise to be verified by Guinness researchers; all couples had to be counted going into the staging area on their respective ships; and cruise ship crew had to monitor participants to make sure no one left before the ceremony began.

Watching over it all on Regal Princess was Guinness Book of World Records adjudicator Michael Empric, a 41-year-old New Yorker and experienced cruiser. (He was actually offered this particular record to judge because of his familiarity with cruise ships.)

When we met Empric after a bridge tour a few hours before the vow renewal ceremony, he was just as excited as many of the couples we'd been meeting since we got onboard. Everything was going great, he told us, adding a cruise ship is a perfect place to attempt a world record.

With a captive audience, it's easier to get people to participate, plus ships are run with a military precision that makes the tracking easier.

It was that precision -- and all the planning that went into the effort -- that paid off, Empric later told us, with just two couples leaving before the ceremony began, and resulting in well over the 1,201 mark that needed to be achieved.

All couples will receive a certificate in the mail in the next few months making their participating in a World Record official, and Cruise Critic will be among them.