You may also like
Dismiss
Coronavirus: Updated Cruise Ship Policies and Cancellations Because of COVID-19 (2021)
Rolling Out the Deals: Why Now Might Be a Great Time to Book a Cruise
Live From MSC Cruises' MSC Grandiosa: What's it Like Sailing on a Big Ship in the COVID Era?
Allure of the Seas Cruise Ship to Make Oasis-Class Debut in Galveston
Cruising the Newest Ship Afloat: Live From Celebrity Apex
Live From Royal Caribbean's Odyssey of the Seas: Why You'll Never Be Bored on This Cruise Ship
NCL Reveals More Dining, Design Details on New Cruise Ships Norwegian Prima and Norwegian Viva
These Ships Are Coming Back To The U.S. in 2022: Here’s Why You Should Care
Live from Grandeur of the Seas: The Beloved Lady G Cruise Ship Still Reigns
Just Back From Allure of The Seas' Maiden Galveston Sailing: Hits and Misses 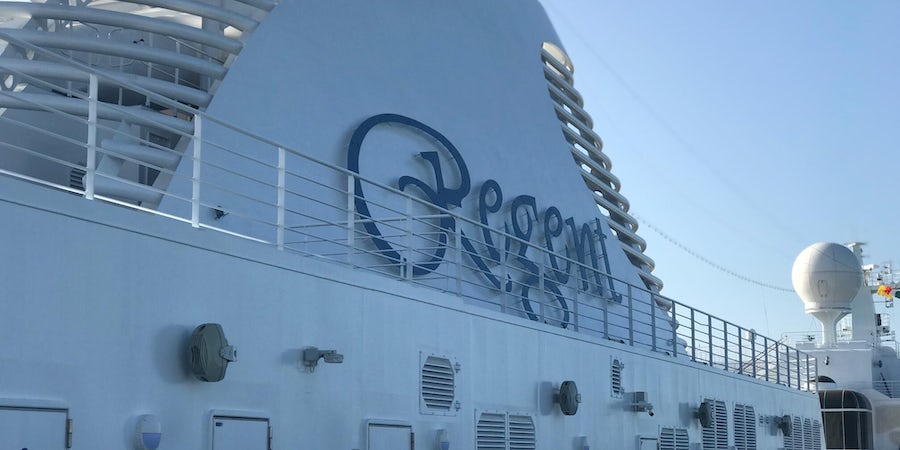 The first new cruise ship to debut this decade has arrived. Seven Seas Splendor, the follow up to Regent Seven Seas’ Explorer, has just sailed from Rome to Barcelona with VIPs, media and members of the travel trade onboard.

The €422 million, 750-passenger ship, which is nearly identical to Seven Seas Explorer, departs today from Barcelona to Florida, where it is set to be christened by godmother Christie Brinkley in Miami on February 21.

Following a short series of U.S. sailings, the ship will return to Europe to offer Mediterranean itineraries from April.

We’ve just arrived in Barcelona on the final day of Seven Seas Splendor’s shakedown cruise and here are our first impressions of this ultra-luxurious new ship.

It Doesn't Get Much Swankier Than the Regent Suite

It doesn’t really get much more upscale – on land or at sea – than the Regent Suite. In addition to a $200,000 bed, the ship’s 3,151 square foot suite features an in-suite spa, a fully-stocked bar, a Steinway piano, walk-in closets that are 50 percent bigger than the ones on Explorer and a gorgeous 1,292 square foot wrap-around balcony. The piece de resistance is, arguably, the original Picasso hanging in the master bedroom.

The Regent Suite has the vibe of an ultra-luxurious Miami penthouse. Is it flashy? Yes. Do we love it? Absolutely. It’s not going to be for everyone, though, given that it comes at a cost of $10,000 per night.

For passengers that don’t have a movie star’s budget, Seven Seas Spendor has a total of 375 suites across 10 categories (there are no “cabins”), starting from the 215 square-foot Veranda Suite. We like that all suites feature generously-sized balconies and we especially love the 332-square foot Superior and Concierge suites, which feature a gorgeous European King-size bed that faces the ocean.

Dining is Outstanding, Though Limited for Veggies

From breakfast burritos packed with flavor at La Veranda to Compass Rose's wonderful once-a-week brunch serving freshly-made sushi, sashimi, King Crab, lobster, caviar blinis, Jamon Iberico Iberian ham and the most decadent desserts, among many other dishes, the overall quality of dining onboard has been remarkable.

While we haven’t had the opportunity to dine at Pacific Rim on our sailing, Franco Semeraro, Regent’s Senior Vice President, Hotel Operations, says 70 percent of the menu has been updated, with improved recipes and a focus on enhancing the dessert section. Though we did notice a lack of vegetarian options at the specialty restaurants -- particularly at Pacific Rim, which offers no veggie appetizers. Prime 7 is also not suitable for vegans or vegetarian, with not a single option in the entrees section.

The ship's Serene Spa & Wellness, which was recently rebranded across the line’s fleet, is gorgeous and, as the name suggests, a truly calming space onboard. There’s an infinity pool outside to the aft and we love that there’s a separate hydrothermal suite for men and women, which includes a sauna with ocean views, a steam room with a traditional shower inside, an experience shower, heated stone relaxation beds and a Cold Room.

The space is free for passengers to use -- even without booking a spa treatment -- and we recommend taking advantage of this, particularly on a port day when fewer passengers are likely to be around. Bathing suits are not mandatory in the hydrothermal suite, so be mindful that you might end up seeing a lot more of fellow passengers than you’d bargained for.

The drinks offering on Seven Seas Splendor is a notch up from that on the rest of the fleet. We love that there’s an entire station dedicated to creating Bloody Mary’s at the ship’s buffet restaurant La Veranda at breakfast. And if you find a stick of celery garnish passé, you can personalize your Bloody Mary with a selection of more adventurous ingredients, such as olives, crispy bacon or even pickled onions and cornichons.

The ship’s brand-new experimental cocktail menu, offered solely in the Meridian Lounge, is likely to appeal to a broader crowd. There are seven new gin drinks and 19 new cocktails in addition to the more traditional cocktails that can also be ordered. From smoked creations to a spritz of perfume to finish off a cocktail, we love the boldness of flavors and theatrics of watching the mixologist perfecting each drink at the bar. And if Bloody Mary’s and Rosemary-infused cocktails aren’t your thing, the inclusive wine selection is also outstanding.

Taking a Culinary Arts Class is Worth the Splurge

One of the few extras that passengers have to fork out for is the Culinary Arts Kitchen, which is $70 for roughly two hours of tutelage and it’s worth every cent. Taking place in the ship’s specially-designed kitchen, which can accommodate up to 18 passengers, pupils typically make three dishes and get to learn new techniques and hone their existing skills, with recipes themed on destinations on the ship’s voyage.

Our class was led by Regent Seven Seas’ executive chef, Kathryn Kelly. Chef Kelly has a real passion for cooking and the provenance of the produce -- regaling in stories of her travels and her favorite dishes from when she was younger. In addition to eating the dishes you cook, you’re welcomed with a glass of fizz, which is topped up during the class. You don’t need to be a culinary whizz to take a class. If you’re a foodie or even just keen to learn how to create a couple of dishes, we recommend reserving a spot in the Culinary Arts Kitchen.

Entertainment Doesn’t Quite Hit the Mark

The ship’s blockbuster show, "Crossroads," focuses on a showdown between the musical genres of country and rock, with a barn dance coming up against a rock show. We enjoyed the costumes and set design, but vocals weren’t quite up to scratch and the narrative fell flat. Overall, the performance didn’t quite hit the mark for us and it seemed other passengers felt the same way, with some walking out before the end of the show. The ship’s other new show, “Diamond Run,” was described by our Cruise Director as James Bond meets Austin Powers. We’re yet to see the performance, but we’re hoping it’s a step up from “Crossroads”.

Is Seven Seas Splendor for Me?

Seven Seas Splendor feels like the perfect size luxury ship. It’s not too small that you end up running into the same people in the same spaces time and time again, and not too big that you feel lost. The ship is easy to navigate and spaces flow nicely. We like that there’s a clear view from reception on Deck 5 to Pacific Rim restaurant and the dramatic dragon statue that sits outside. We also like the addition of the outside area of Coffee Connection, which allows passengers to take their tea or coffee alfresco. The Pool Deck, too, feels more spacious, with more sun loungers and the Constellation Theater contains fewer seats than sister ship Explorer, which means passengers get more space.

This isn’t a late-night party ship and the entertainment can feel a little staid. But where Seven Seas Splendor excels is the dining, with truly outstanding cuisine that is, arguably, the best at sea.