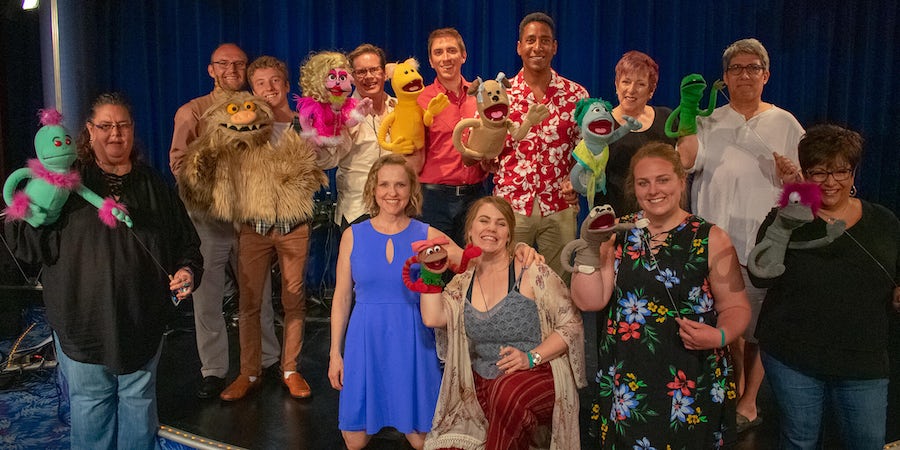 (11:30 a.m. EST) -- Broadway fans have more reasons than ever to take a cruise. Not only are lines like Royal Caribbean and Norwegian running shortened versions of Broadway musicals on their cruise ship stages, but Broadway theme cruises are immersing cruisers in a world of theater and letting them hobnob with stars as they visit bucket-list destinations and unwind on vacation.

is a theme cruise company that's expanding, now that organizer Seth Rudetsky has teamed up with travel agency Judy Perl Worldwide Travel. We caught up with Rudetsky -- who has his own Broadway show on SiriusXM radio and has previously worked as a comedy writer for Rosie O'Donnell and as a Broadway musician -- to talk about what he loves about cruising and what sets his theme cruises apart.

Cruise Critic: How did you come to launch a series of Broadway cruises?

Seth Rudetsky: I met Rosie O'Donnell on Broadway and was a comedy writer for her, so when she started a cruise company R Family Vacations, she hired me to do the entertainment. We brought Broadway people onboard to do shows. I'd never done a cruise before and loved it. I did it every year, and I would email my Broadway friends and ask them to do the cruise with us.

Then I got involved in some others cruises. My husband James said to me, we should do our own cruises since we're doing all the work anyway to plan the entertainment and activities. Let's just hook up with a cruise company. So we went to David Siewers, who's a bigwig at Celebrity Cruises and a Broadway friend. And we asked, within a giant cruise, can we do a Big Fat Broadway Cruise, give it the same name as the Sirius show, and he said yeah.

CC: How are your cruises different from other Broadway cruises or Broadway acts on cruises?

SR: Often on cruise ships you see aspiring Broadway stars, but my cruise is different because we bring established Broadway stars with amazing credits. Typically, when you get a Broadway star on a cruise, they perform an act, with scripted songs and patter. With my signature shows, there's no set show; between every song, I interview them. Nothing is set; they don't know what they'll talk about or what they're going to sing.

For example, we had Chita Rivera onboard, and she was talking about performing in "Can-Can," and I raced to the piano and said, do you know this song from that show, OK, hit it -- so she's performing spontaneously. So you've got not a giant theater but a smaller space, and a star is performing a story they've never told or a song they've never sung.

SR: At the end of every cruise, we do a variety show where the Broadway stars will do a song they always wanted to sing. The different stars will perform together, who maybe haven't performed together before, and we also rehearse the passengers and they're in show, too, doing three giant production numbers with the stars and the passengers.

We also do a master class as a day event on a sea day, and people get a huge kick out of that. It's a big hit. They learn how to make a song be good, not just about hitting the right notes but about acting and staging.

We do Broadway Bingo, and the Sirius show can be broadcast at sea, so I broadcast live with passengers giving shout-outs to their family in Idaho, and everyone loves it.

My husband and I do a lot of benefits and are into social justice, and we bring that to the cruise. We're into animals, so we hook up with a local animal shelter in port and take the passengers to visit, bringing items the shelter needs like leashes and flea medication. Rudetsky admits to occasionally adopting another pet from shelters he visits on his cruises.

CC: With all the audience participation in shows on your sailings, are most of your guests aspiring actors?

SR: No, they're mostly not aspiring actors, but couples that completely love theater. They're basic Broadway fans, not psycho. Many of them listen to my Sirius radio show. People come from all over the country. Some are mixed couples a Broadway fan with a spouse less interested in theater, mostly over 40.

CC:  How many people do you have on a cruise?

SR: The average is 100 people. We have a whole area of the restaurants to ourselves. The guests really get to hang out with me and the stars, and we all sit together at dinner.

CC: Do you go on every cruise?

SR: I can't imagine missing one, and I've never missed one.

CC: How do you get the Broadway performers to come on your cruises?

SR: It's called texting! I've been working on Broadway for 25 years; there's not a star I haven't worked with. So I text my friends and ask them to come. Some of them are scared of water and won't cruise, but we're going to Bermuda this year, and I might fly my friend down because the ship is docked overnight. My taste level is really high, so I can do a last-minute text if someone cancels, and I can get someone good.

CC: How does your new partnership with Judy Perl enhance your trips?

SR: I've been working with Judy Perl on various other cruise vacations, and she came onboard and expanded us. She's the queen of travel, so now we're doing QM2, going to Tahiti, going to do a riverboat cruise. We're expanding beyond Celebrity though several Big Fat Broadway cruises still take place on Celebrity.

CC: What do you love about cruising?

SR: Coming back to a room that's deliciously clean!

I love going to places I never in a million years would think I'd get to go or hadn't heard of -- like the Norway fjords. We just rebooked it; I said we have to go back. I loved the outdoor stuff there. We rented motorized bikes and explored.

I hadn't been to Venice before, and now it's my favorite city after cruising there.

You go to amazing places and come back to a stunning home that night and don't need to deal with an airport. It's a giant floating city, but I can always can go to the library or solarium and have the place to myself. It's not crowded at all.

Plus, on my cruises, it's great being around people who love Broadway. I'm doing three shows a day and working a lot, but it's super fun. I wouldn't love cruising as much if I were on a football cruise.

SR: Don't overpack. I wear the same pair of pants the whole week, even though I pack more.

Also, I get seasick, so I can't go on a sailboat, but if you're scared to come, know that you don't get seasick on these big ships.

SR: I want to cruise around England, Ireland and Scotland. We're taking the Queen Mary 2 from New York to London, and then as part of the cruise package for all Broadway cruise guests we're going to stay for four days and see West End shows, get backstage tours, etc.

I'd love to cruise to Australia. And Tahiti, but we're already planning a cruise there.