You may also like
Dismiss
Coronavirus: Updated Cruise Ship Policies and Cancellations Because of COVID-19 (2021)
Rolling Out the Deals: Why Now Might Be a Great Time to Book a Cruise
Cruising the Newest Ship Afloat: Live From Celebrity Apex
7 Highlights From a Week Onboard Celebrity Apex
Live From Celebrity Edge: A Cruise That Seems Normal Again; "I'm So Hopeful"
Live From Royal Caribbean's Odyssey of the Seas: Why You'll Never Be Bored on This Cruise Ship
Emerald Cruises Officially Launches in Australia
NCL Reveals More Dining, Design Details on New Cruise Ships Norwegian Prima and Norwegian Viva
Celebrity Cruises Partners with Annie Leibovitz, Renowned Photographers in Project That Recognizes Diversity in Travel 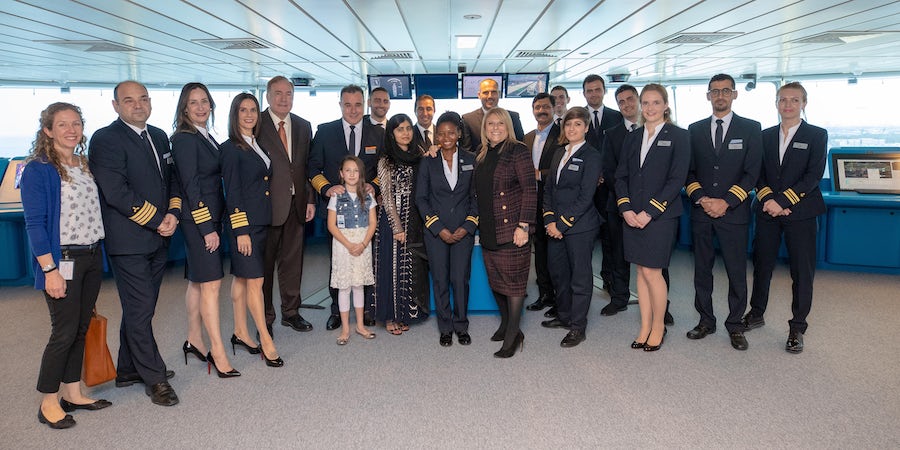 As well as unveiling a host of new experiences on Apex, the line also cut steel on its next Edge-class ship, Celebrity Beyond, which launches in fall 2021.

Cruise Critic caught up with Celebrity's president and CEO Lisa Lutoff-Perlo at the event to talk about what's most important to the company.

Celebrity is spending around $600 million on retrofitting its existing fleet with a number of features that debuted on Celebrity Edge, including the suites-only lounge and sun deck, The Retreat. Cabins across the fleet also are receiving a cleaner, more modern look created by Kelly Hoppen, one of the main interior designers of the Edge-class ships.

"I would say the biggest impact that Celebrity Edge had on the rest of the fleet was the 'Celebrity Revolution,'" Lutoff-Perlo told Cruise Critic. "We realised that we were able to retrofit because of the halo effect of Edge."

But the revolution won't just include features that debuted on Edge. Craft Social, a new bar concept launching with Apex this spring will be retrofitted onto Edge (where the current casino bar is) -- and also will be fitted onto other vessels, including Celebrity Silhouette.

Silhouette, which returns to the UK in April for a second season, is currently being "revolutionised" in a shipyard in Cadiz.

Celebrity has been gradually moving toward creating exclusive spaces for suite guests over the past few years, starting with the fleet wide rollout of Luminae, a suites-only dining venue. On the Edge-class ships, the line went all in creating "The Retreat," a complex with the aforementioned Luminae, plus a private sun deck, pool and lounge.

As part of the Celebrity Revolution refurbishment program, elements of The Retreat are also being rolled out to the rest of the fleet: Michael's Clubs are being converted into The Retreat Lounge and Retreat Sun Decks are being added, though most without a pool.

The Retreat effect is almost, but not quite, a "ship within a ship” space, such as The Haven on Norwegian Cruise Line or the Yacht Club on MSC Cruises.

We asked whether that was the direction Celebrity was going.

"Perhaps," Lutoff-Perlo said. "We haven't quite gone that far with Edge and Apex, but maybe in the future.

"We're getting closer to it, but I don't see it, even in this series of ships, where it's just total keycard, direct elevator access. It's still a little more integrated into the rest of the ship.

"What we have on our existing fleet is that it i.e. the suite-only spaces is spread out; what we have on Edge series is that it's a lot more contained but not fully contained… And you know maybe in future generations of ships we'll go all the way, but right now we're sort of a good blend of both."

As more cruise lines enter the expedition space we wondered whether this is a route Celebrity might consider going further along. The line has been operating an expedition ship in the Galapagos for more than 10 years and presently has three ships in the region.

"Celebrity got into the Galapagos in 2003 and 2004 and it turned out to be a wonderful experience for Celebrity and it fits beautifully into our portfolio," Lutoff-Perlo said, but added that expanding into the Galapagos with another Flora-type vessel is difficult to do. (Celebrity Flora is the line's 100-passenger expedition yacht; the line also has the 48-passenger Xpedition and 14-passenger Xploration.)

"I will never say never, because you never know, but it's so hard…"

"We need to be true to who we are, which is a modern luxury, medium-sized cruise brand," she added. "I don't think the space is right for us to get into in a big way… there are a lot of lines -- we Royal Caribbean Cruises Ltd. even have one now, Silversea -- which is focusing on it."

Another current buzzword within the cruise industry is sustainability, both environmentally and as concerns overtourism.

Both are issues Celebrity is committed to tackling.

"On Edge and Apex we have eliminated 90 per cent of single use plastics onboard," Lutoff-Perlo said. "We've gone way beyond straws -- you won't find a little creamer onboard, a condiment, plastic yoghurt containers, you won't find amenities in the bathroom that are single use -- we've gone to aluminium or glass water bottles, we don't have any plastic onboard."

The line is making similar efforts across its fleet. "What we've done across the rest of the fleet is everything except replacing plastic bottles with the aluminium water bottles just because we're still searching for the right mass solution."

In an effort to reduce its contribution to overtourism Celebrity is introducing "Positive Impact" tours this spring in Europe. These tours get passengers deeper into the communities the line visits, "rather than just taking people to the big squares," Lutoff Perlo explained.

"We're pivoting off the more traditional tours to offer these Positive Impact tours and we're partnering much more closely with the ports."

Lutoff-Perlo is an active advocate of gender equality and Celebrity Apex, like Edge before it, will have a 30 to 70 female to male mix on the Bridge -- one of the highest in the industry.

To spotlight the issue, on March 8 -- International Women's Day -- that figure on Celebrity Edge will be even higher; 100 percent of the crew serving on the Bridge will be women. Furthermore, all non-Bridge officers will be women as well.