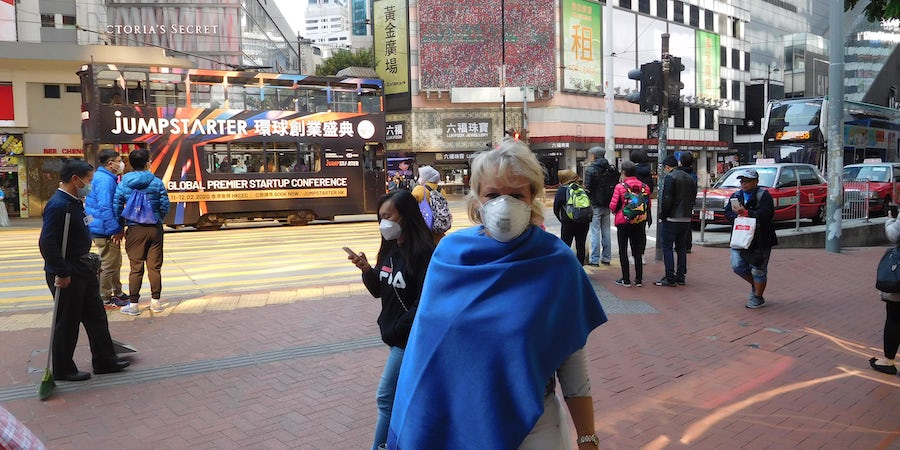 Live From Hong Kong: Coping With the Coronavirus on a Cruise

As the coronavirus continues to claim more victims across the Chinese mainland, Cruise Critic contributor Sara Macefield found herself enroute to Hong Kong onboard Celebrity Millennium. Here’s her account of what it’s like onboard the ship -- and her experience visiting Hong Kong.

I knew something was amiss as we sailed toward the Philippines on Celebrity Millennium after leaving Kota Kinabalu in Malaysian Borneo last week.

A note appeared in our cabin requiring us to fill in a health declaration card and attend a face to face "quarantine inspection" with Filipino immigration officials the following day.

There was no avoiding it; this was mandatory for everyone. During the two-hour window we were given to attend, queues quickly formed, but the entire process was fast and straightforward, as we were required to walk past a thermal camera that would detect if anyone had a raised body temperature.

An abnormally high reading could point the finger at anyone infected with coronavirus, which was creating fear across Asia and beyond from its starting point in the Chinese city of Wuhan.

Four days later, and with coronavirus tightening its grip on the region as more cases emerged, Celebrity Cruises stepped up its warnings, and we arrived in Hong Kong on Sunday to be greeted by lines of mask-wearing officials.

We had already received notices in our cabin from Captain Theodoros Zakkas explaining that the Chinese territory had declared a state of emergency, but stressing that Celebrity Cruises had no plans to cancel shore excursions or modify the itinerary of this two-week roundtrip Asia sailing from Singapore, which finishes this Saturday (Feb 1).

However, the notice advised passengers to practice "good sanitation" and frequent handwashing/sanitizing during the cruise and to cough or sneeze into tissues or on upper sleeves, but not into hands.

The notification also urged cruisers to avoid close contact with anyone showing respiratory symptoms and to wear masks when necessary.

Those with flu-like or gastro-intestinal symptoms or anyone fearing they had been infected was asked to visit the ship’s medical center for a complimentary examination.

With regular announcements over the ship's PA system and reminders from crew members, there was a feeling of vigilance, which was compounded as we walked into Hong Kong's Kai Tak cruise terminal which felt more like a decontamination zone.

Posters on the walls, in English and Chinese, warned of the dangers of communicable diseases, and an official gave out leaflets containing preventative measures on how to avoid becoming infected.

A sign instructed travelers to take off hats so a thermal camera could record each passenger's body temperature as we walked past, while a uniformed staff member handed out facemasks.

Upon reaching the city center, it was clear this was no panicky reaction; nearly everyone else was wearing them, from mothers with young children to the elderly.

Despite this, I didn't feel the need to cover up, and a tourist board volunteer, who had previously worked as a nurse, felt the same, telling me that she didn't think such a step was necessary as long as people avoided close contact.

Fellow passengers were similarly unfazed, and everyone seemed to disembark as normal, but a fair number donned their masks, though they treated it as routine.

One of the many Britons aboard, Teresa Phillips from Norwich joked that, while wearing her mask, she had to rip it off for a bout of sneezing and then felt self-conscious as everyone turned to stare at her.

Admittedly, as my friend and I entered Hong Kong's uber-efficient Mass Transit Railway subway system, we definitely stood out as a tiny minority not wearing facemasks.

Our journeys on the MTR during Sunday and Monday were accompanied by regular announcements throughout the network urging travelers to be vigilant regarding hygiene, with frequent handwashing to avoid spreading germs.

Overall, life in the city appeared to be continuing as normal, though roads, markets and some shops were somewhat quieter than usual, thanks to the Chinese New Year holiday.

As I got back onboard the ship, I thought to myself: we might have been at the front line of a pandemic about to sweep the world, but for passengers and crew, it was more a matter of keeping calm and carrying on.

Coronavirus: What Cruisers Need to Know