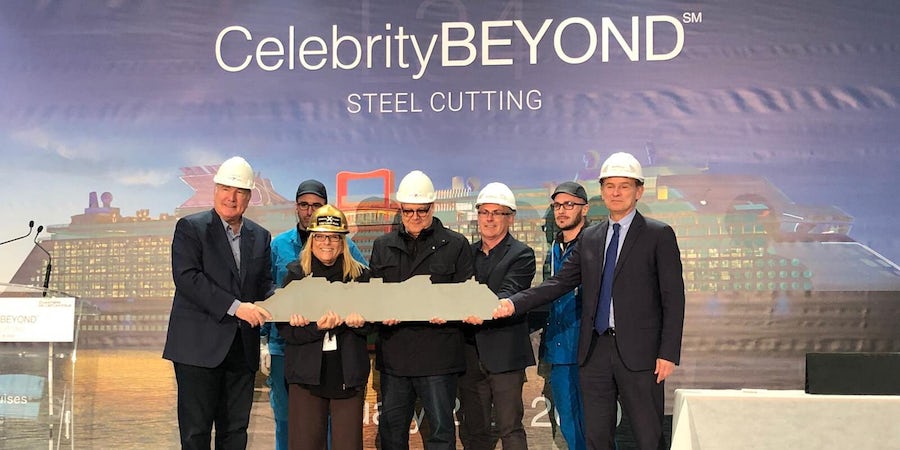 (9:25 a.m. EST) -- Celebrity Cruises cut steel on the third of its revolutionary Edge-class ships at a ceremony in France today. Celebrity's president and CEO Lisa Lutoff-Perlo and Royal Caribbean Cruises Ltd.'s chairman and CEO Richard Fain both attended the event.

"This is really a special day," said Lutoff-Perlo. "Three years later after Celebrity Edge's steel cutting here I am to cut the steel for Celebrity Beyond, the third in the series of the Edge Class."

The steel-cutting took place at the St. Nazaire shipyard in France and marks the first stage of construction for Celebrity Beyond, which will come into service in fall 2021.

"Stay tuned because we are confident this will be the best series of ships the industry has ever seen," Lutoff-Perlo added.

A fourth as-yet-unnamed Edge class ship will launch in spring the following year.

The second ship in the Edge Class, Celebrity Apex will be christened in Southampton on March 30. Apex will not be a carbon copy of Celebrity Edge, the line revealed yesterday. Instead, it will feature new dining options and bars, as well as redesigned spaces.

The 2,900-passenger ships feature cutting-edge design and a number of unique features, including "infinite balconies" and a cantilevered platform off the side of the ship known as "the Magic Carpet."