You may also like
Dismiss
2019 Atlantic Hurricane Season Outlook: What Cruisers Need to Know
Cruising the Newest Ship Afloat: Live From Celebrity Apex
7 Highlights From a Week Onboard Celebrity Apex
Live From Celebrity Edge: A Cruise That Seems Normal Again; "I'm So Hopeful"
Live From Royal Caribbean's Odyssey of the Seas: Why You'll Never Be Bored on This Cruise Ship
Royal Caribbean's Odyssey of The Seas Cruise Ship Officially Christened
Celebrity Beyond Completes Sea Trials; Moves One Step Closer to Debut
NCL Reveals More Dining, Design Details on New Cruise Ships Norwegian Prima and Norwegian Viva
Celebrity Cruises Partners with Annie Leibovitz, Renowned Photographers in Project That Recognizes Diversity in Travel
These Ships Are Coming Back To The U.S. in 2022: Here’s Why You Should Care 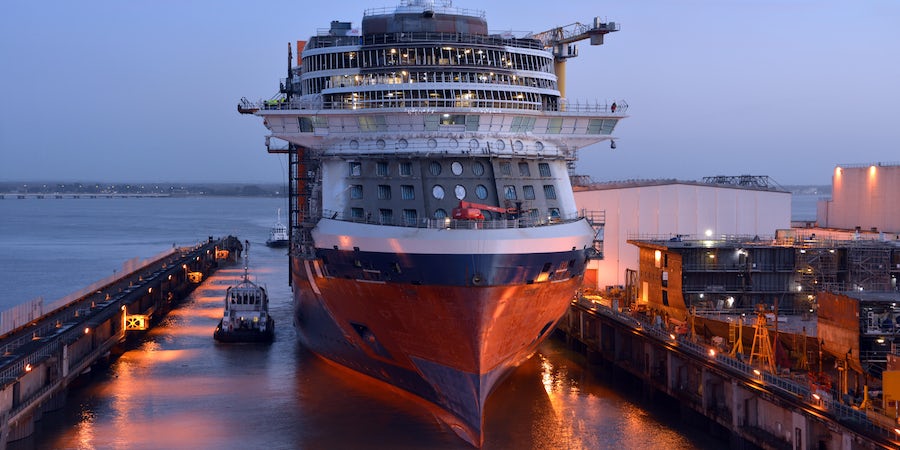 The 2,900-passenger ship, which will be christened in Southampton on March 30, will have new food offerings in Eden, Le Petit Chef and Raw on 5; a brand-new bar called Craft Social and another bar in the suites-only space, The Retreat. The redesigned theater will include a brand-new LED screen as well as three new shows.

The changes are in direct response to passenger feedback said Lisa Lutoff-Perlo, Celebrity's president and CEO, speaking at the shipyard in St. Nazaire, France where Celebrity has just cut the steel for Celebrity Beyond -- the third ship in the Edge Class. "We are listening to our guests and refining the product."

One of the biggest changes will be the addition of the Craft Social Bar, a casual space that will offer draft cocktails, wines on tap and more than 50 of the world's rarest craft beers served by a certified beer sommelier. In addition to drinks the bar will serve up comfort foods such as mac and brie, Kobe beef sliders, crispy chicken sliders and meat and cheese boards.

Celebrity Apex will feature three new stage shows in The Theatre (which, itself, will boast a new 23-foot-tall 4K LED screen curving around the stage), along with an intimate cabaret show in The Club.

Among the new shows will be "Rockumentary," which will celebrate some of the greatest classic rock moments in history and give audience members the chance to vote for their favorite finale. The show "Tree of Life" will take the audience on a journey through life's most relatable moments -- all set to pop music, of course. It will feature a 20-foot-tall Tree of Life, complete with more than 3,000 LED leaves that change color as the seasons of life change.

In Eden, a series of new experiences will see the vibe in the lounge change throughout the day. For instance, an eclectic afternoon tea party morphs into a wonder-filled journey in a "Night of Dreams," complete with live performances and audience interaction. As the day winds down interactive art displays will lead into "Night of the Arts," which celebrates the arts through interactive experiences and performances.

Debuting in The Club, "Caravan" will be a cabaret-style production featuring new takes on classic circus acts with aerial acrobatics, acts of balance and precision, and more.

The fitness center will be significantly larger on Apex than it is on Edge, allowing Celebrity to offer F45 Training, a series of 45-minute, station-based, heartrate-monitored team training workouts.

Additionally, wellness will spill out of the spa and fitness center and into the main dining rooms with a new Destination Wellness program featuring locally inspired spa menus inspired by the destinations the ship visits.

The ship's onboard Camp at Sea will expand it's S.T.E.M. programs with educational coding classes offered in collaboration with Girls Who Code.

Celebrity Apex is the second Edge-class ship from Celebrity Cruises and is currently under construction at Chantiers de L’Atlantique shipyard in France. Apex will sail a season of Northern Europe and Mediterranean cruises when it launches in March. It repositions to Fort Lauderdale in November for a winter season of week-long Caribbean sailings.