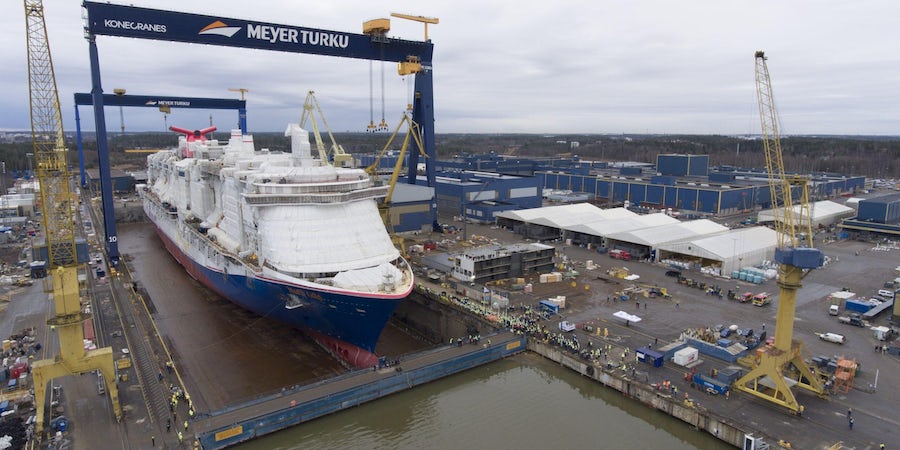 (11:55 a.m. EST) -- Mardi Gras, Carnival Cruise Line's largest ship, floated out Jan. 24 at the Meyer Turku shipyard in Finland, marking a significant event in the ship's construction. Now in water, the vessel will continue to be outfitted before its debut in the fall.

The 5,200-passenger ship is noteworthy for its size and features -- including BOLT, the first rollercoaster at sea -- which the cruise line said will be installed on the ship in coming weeks.

Mardi Gras will also introduce the first seagoing version of "Family Feud," with teams of cruisers competing on a stage with a set just like the one found on the popular TV show. The more than 2,600 staterooms include 180 suites, some with access to a private sun deck. In a new concept, the ship's atrium has three-deck-high floor-to-ceiling windows and moveable LED screens.

"We can't wait for our guests to experience Mardi Gras, a one-of-a-kind ship that is true game changer and continues the evolution of the Carnival vacation experience," said Ben Clement, Carnival's senior vice president of newbuilds.

"A custom floating smart city," is how Meyer Turku referred to the ship in a separate press release.

After a previously announced delay, Mardi Gras will be delivered in October and debut on sailings from Port Canaveral on November 14.