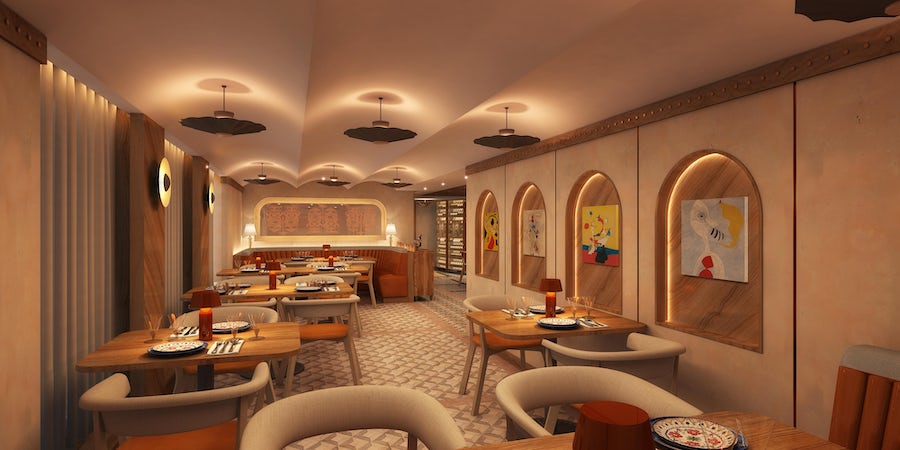 Sasso, one of the youngest chefs recognized by the Michelin guide (while at New York's Casa Mono), will take passengers on a culinary tour of Spain, starting with tomato bread (pan con tomate) and 24-month aged jamon Iberico (cured ham).

There will also be an array of small plates to share, followed by a choice of six big-plate entrees. Among the starters will be a Spanish tortilla from Madrid, made with potatoes, eggs, onions and olive oil, plus Sasso's addition of parsley creme fraiche and a potato chip gremolata. The chef will also present his take on the classic Spanish paella, which will be a rolled, ball-shaped croqueta topped with nori panko crust, saffron sofrito and chorizo aioli.

"It breaks every rule, which is why I love it," Sasso said in a press release. "It's one of the most fun dishes to eat at a Spanish restaurant because it's sloppy and you put a spicy garlic mayo on it. It makes no sense, but it totally works and it's great to eat with a group of people."

Sasso will also serve an olive oil-poached cod dish from the Basque Country. Desserts will include a boozy Galician almond cake with sangria-soaked fruit and churros with tamarind-infused chocolate sauce, spiced up with chili flakes, salt and hibiscus.

Everything will be cooked from scratch, the menu covering all of Spain. "We're going to make it feel as real as possible -- like you're floating on land in Andalucia with flamenco music playing and you're looking out at the water from the beach," Sasso said.

The restaurant will debut on Windstar's Star Breeze in May, Star Legend in September and Star Pride in December. All three ships are undergoing an extensive renovation and stretching (each featuring a new mid-section with 50 cabins being added) as part of the line's \$250 million Star Plus Initiative. After the stretch, the ships will carry 312 passengers each.