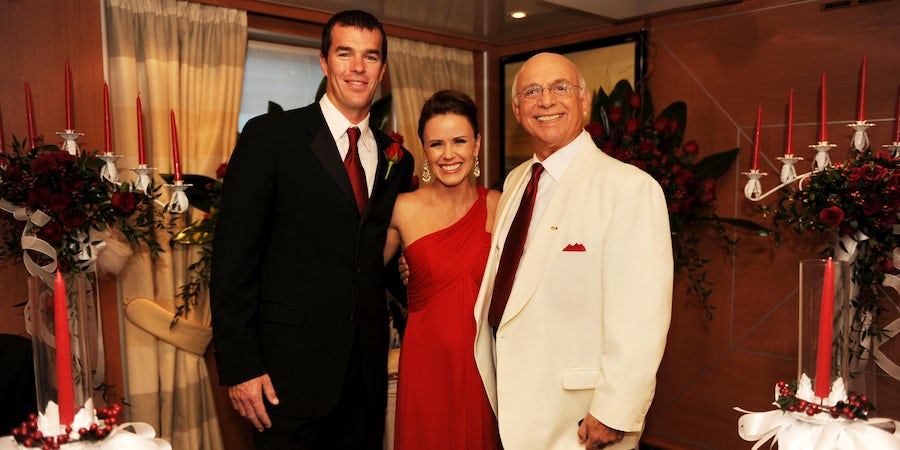 Q&A with "The Bachelorette," Trista Sutter: On Vow Renewals, Romance and Family Time on a Cruise

On February 11, 2020, Princess Cruises will attempt to set a record for the largest number of couples renewing their vows at sea, and have the attempt recognized by the Guinness Book of World Records. Passengers on three ships will be involved, with actors from "The Love Boat" (Gavin MacLeod and Jill Whelan) officiating onboard Regal Princess in the Caribbean, and Trista and Ryan Sutter, of "The Bachelorette" reality TV show, officiating on Royal Princess on the West Coast. (Couples onboard Crown Princess can also participate on February 11, but there will be no celebrity host.)

The Sutters, who met on the first season of The Bachelorette, have been married for 16 years and previously celebrated their fifth anniversary on the inaugural sailing of Ruby Princess, when they christened the ship as its godparents.

Cruise Critic spoke with Trista Sutter about the upcoming cruise, why a cruise ship is a perfect place to renew your vows and what she wishes she'd known on her first few cruises.

Cruise Critic: Because you and Ryan will be officiating at the vow renewal ceremony, you will not actually be renewing your vows on the Royal sailing. Tell us, what does the renewing of vows mean to you?

Trista: I'm a big proponent of vow renewals. I feel like it refocuses your attention on each other. Renewing your vows takes you back to why you got married in the first place.

We renewed our vows for our tenth anniversary, for a special on ABC. Our wedding was a bit spectacular and we felt we wanted to do something that was more representative of who we are as people. So we did it in Beaver Creek, where we live. We made it small and it was really special to us. We hope we can provide this same feeling to people on this cruise.

Cruise Critic: Why is being a part of this vow renewal record attempt important to you?

Trista: I love love and this is all about love. And it's cool. We've never been a part of a Guinness World Record before. There will be actual adjudicators on board. We need to get 1,201 passengers renewing their vows. It's really exciting.

Cruise Critic: Why do you think a cruise ship is a good place for couples to renew their vows?

Trista: Cruise ships focus on romance, and they want you to focus on each other. There are so many people who haven't been on a vacation since their honeymoon, or never went on a honeymoon. Cruises let you escape your normal life. And all the ingredients of romance are there, such as roses and chocolates. They even have a spa treatment where they use chocolate to exfoliate your body and then give you a massage afterward

Trista: Yes, it's big and spectacular but in another way it's also more intimate. Most of these couples will not have any family onboard with them, so other than during the ceremony when, yes, there are several hundred, hopefully 1,201, other people, it's just them celebrating each other. So it's kind of a little of both, the spectacular part of doing it in public and then the intimate part on the ship.

Cruise Critic: Other than your fifth anniversary when you were the godparents for Ruby Princess, have you cruised before?

Trista: Yes, we've cruised prior. I went to Alaska with my family and I went to the Bahamas with a friend. We also did a Caribbean cruise and we took Ryan's parents. We went to Roatan and Princess Cays. But the kids were tiny.

The kids will be with us on this one. It will be a very different experience for us; our kids are 10 and 12. They're much more independent and they'll enjoy their independence onboard. We can let them explore. But for us, it is about having quality family time together. I love the kids' clubs and will probably utilize them when we're doing our official duties for Princess, but we want to be enjoying time with the kids, too.

We're also looking into sailing to Europe with the kids. We were in Europe with the kids for Ryan's mom's birthday and we want to go back. A great part of cruising for me is that you can hit all these ports and you don't have to worry about the travel in between.

Cruise Critic: What do you know now about cruising that you wish you had known on your first few cruises?

Trista: The first cruise I took was with my family. We did a traditional dining experience, where you sit at the same table every night, which is nice. But I love variety and I love that now you can go to different restaurants and you don't have to sit at the same table every night. Now you can go to the pizzeria one night, and Italian another night or have dinner in your room. There are so many options and I love being able to take advantage of the variety.

Find out more about renewing your vows at sea.