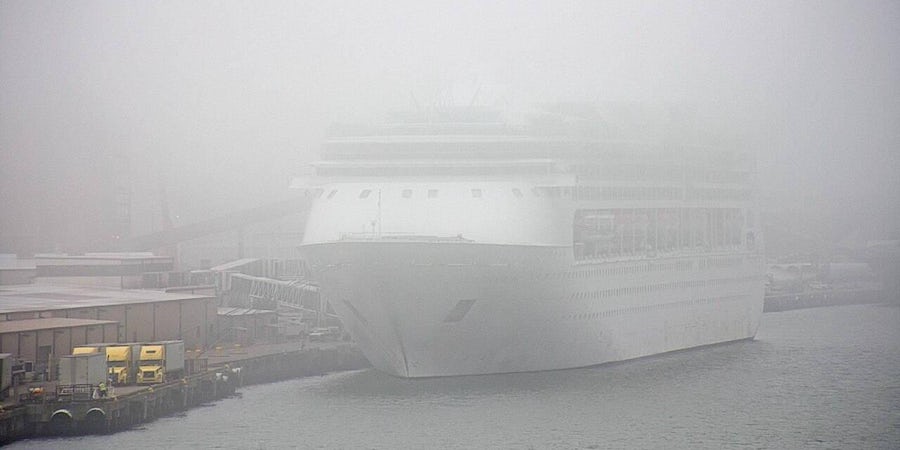 *Update: 12:28 p.m. EST: Enchantment of the Seas was able to leave Galveston late yesterday afternoon, but the scheduled stop in Progreso had to be canceled due to the long delay. *

(3:19 p.m. EST) -- A combination of thick, dense fog and an accident between a fishing vessel and a tanker ship in the entrance channel to Galveston have delayed the previous and current voyage of Royal Caribbean's Enchantment of the Seas.

The 2,252-passenger ship, which was supposed to arrive yesterday morning into Galveston, was forced to anchor outside the harbor as search and rescue crews attempted to search for two missing crewmembers of a fishing boat that sank on Tuesday afternoon after colliding with a cargo tanker.

The channel reopened at 4 p.m. Wednesday to vessel traffic, with Enchantment of the Seas docking approximately 90 minutes later. The ship was expected to turn around last night but has since been delayed by heavy fog.

In a statement to Cruise Critic, Royal Caribbean confirmed that fog had delayed the departure of Enchantment's current five-night sailing, scheduled to call on Progreso and Cozumel, Mexico, but did not outline any itinerary changes. However, given that the ship is still alongside in Galveston, arrival in Progreso tomorrow morning looks increasingly unlikely.

While fog is a regular occurrence near Galveston, such a perfect storm of conditions that closed the channel for a significant amount of time is rare.

"If anybody is still interested, we're on the 1/16 sailing on Enchantment," Cruise Critic member Duckfeeder wrote last night on the Royal Caribbean board.  "Boarding took place at 6:30 p.m., mustered at 9:45 and we were supposed to leave at 10:15 p.m. As of, 12:20 a.m., we're still here, presumably due to fog, but I haven't heard any announcements. We're supposed to have a day at sea and then be in Progreso, Mexico. I know they can make up some time... But at what point do they cancel a port stop?"

Another Cruise Critic member writing from the ship shared his thoughts as well. "I'm no mariner, but my thoughts are if we soon can't get out of here, then we may end up stuck overnight,” wrote ferryg from onboard Enchantment of the Seas. "I'm not sure that it's going to clear any more than it has. They've already said that 'changes' to the itinerary will be necessary, but haven't gone as far as saying what it will be, since they don't even know if or when we are leaving."

As of 3 p.m. EST, Enchantment of the Seas was still tied up at its berth in Galveston.