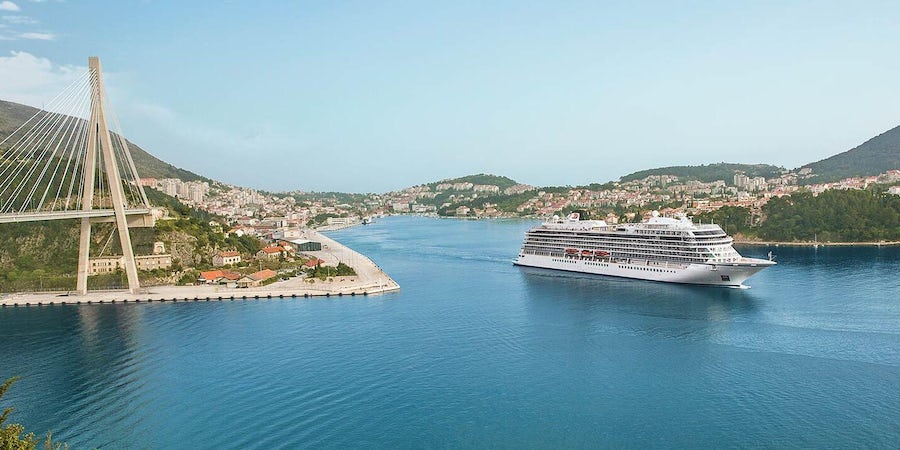 (8:35 p.m. PST) – Although it's already been sailing for nearly a year, Viking Jupiter was officially named today as it sailed between the Falkland Islands and Cape Horn, the southern tip of South America.

The newest addition to Viking Cruises' ocean fleet, which was delivered to the line in February 2019, Viking Jupiter was christened from afar by godmother Sissel Kyrkjebø, one of the world's leading crossover sopranos, at a launch event in Beverly Hills, Los Angeles. In line with naval tradition, Kyrkjebø offered a blessing of good fortune and safe sailing of the ship, before instructing crew members onboard Viking Jupiter to break a bottle of Norwegian aquavit against the hull.

The ceremony was broadcast live between the ship and The Beverly Hilton, where Viking's management team and more than 200 travel industry guests had gathered to celebrate another company milestone -- the debut of Viking Expeditions and its two new ships, Viking Octantis and Viking Polaris, which are expected to launch in 2022.

"We are grateful for our longstanding friendship with Sissel, who is responsible for many of Norway's most treasured musical memories. Sissel was my grandmother 'Mamsen's' favorite singer, and she has been part of the Viking family since we launched our first ocean ship. We are honored to have Sissel as the godmother of Viking Jupiter," she said.

"Viking Jupiter's location tonight, near Ushuaia, Argentina, is particularly significant. Ushuaia is the southernmost port our ocean ships currently visit, but with today's announcement of Viking Expeditions, it will also serve as the launch port for our guests to explore the Antarctic region in Viking comfort."

The 930-passenger Viking Jupiter is almost identical to its five sister ships in the Viking Ocean Cruises fleet. Among its highlights are the onboard planetarium (the first was on Viking Orion, which debuted in 2018), an expansive and complimentary Nordic-style thermal suite, and upgraded dining, entertainment and active shore excursions, all of which have been impressively improved since the line's inception in 2015.

The ship's official christening was delayed in June 2019 after the tragic accident on the Danube River where 28 Korean tourists died when their tour boat capsized in a collision. The original christening event, which was to be held in Oslo, was canceled out of respect for the victims and their families.