You may also like
Dismiss
Coronavirus: Updated Cruise Ship Policies and Cancellations Because of COVID-19 (2021)
In Industry Step Forward, CDC Seeks Public Comment On Cruise Resumption
Rolling Out the Deals: Why Now Might Be a Great Time to Book a Cruise
Royal Caribbean's Anthem of the Seas Cruise Ship to be Based in Southampton in 2021
Wave Season Cruise Deals 2021
Ships Ahoy! A Weekly Round-Up Of Worldwide Cruise Ship News
U.K. Black Friday & Cyber Monday Cruise Deals -- Extended
Additional Cruise Lines Opt To Require COVID-19 Boosters
MSC Cruises Extends Seasons of MSC Virtuosa Cruise Ship in the UK, MSC Bellissima in Dubai
These Ships Are Coming Back To The U.S. in 2022: Here’s Why You Should Care 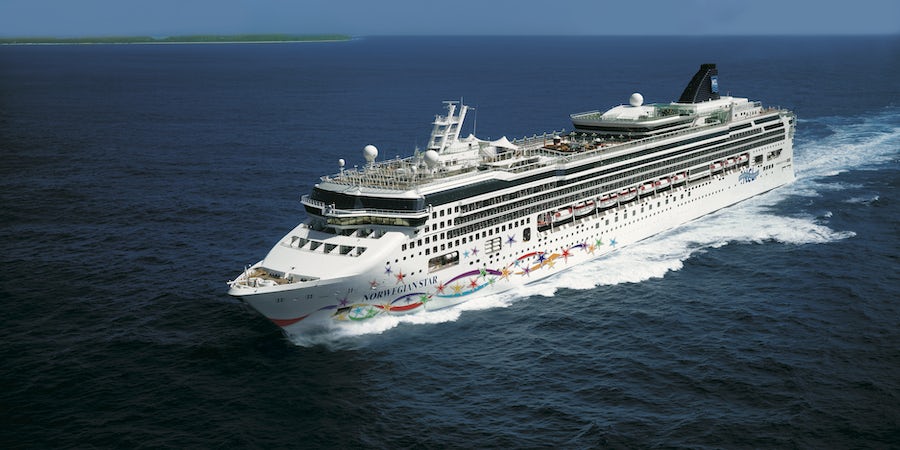 *Update January 3, 2020: Norwegain continues to alter Norwegian Star's planned itineraries well into 2020 due to ongoing mechanical issues, including the ship's transatlantic crossing, which has been moved forward by 10 days and a voyage in April that has seen affected passengers transferred to Norwegian Dawn. See below for the latest changes.*

(December 18, 2019, 4:45 p.m. EST) -- Norwegian Cruise Line has canceled or arrived late into ports on at least 13 of its 16 sailings on 2,348-passenger Norwegian Star between mid-August and December 2019. It is now changing itineraries into 2020, with at least seven voyages in the New Year experiencing alterations.

The tweaked itineraries have come in various regions of the world, from the Mediterranean to Central and South America. In total, 17 of 20 cruises -- or 85 percent -- have been changed in a seven-month period. In some cases of changed itineraries, compensation has been offered, but it's not always guaranteed.

Norwegian Cruise Line has not responded to requests for comment.

A History of Changes

The frequent itinerary changes have prompted Cruise Critic members to speculate that the 19-year-old ship's ongoing mechanical issues have returned.

Norwegian Star was forced to change a transatlantic voyage in 2015 after its azipod system malfunctioned. In 2016, two Asia sailings were drastically altered due to further azipod failure. A similar issue in 2017 meant the ship had to rework several segments of a 33-night Southeast Asia, Australia and New Zealand cruise, sparking passenger protests in the atrium onboard.

Mechanical issues, such as azipod failures, are not unheard of in the cruise industry, and while they might cause itineraries to be altered, they generally don't affect the seaworthiness or safe operation of ships.

"There are four engines, so the only thing the problem does is make us not be able to go full speed," said member SandersFam1. "This makes getting from port to port sometimes take longer than planned, which requires adjusting some of the port arrival and/or departure times."

Still, Cruise Critic members are noting that itinerary changes are now more of a given than a rare occurrence.

"You will probably miss ports or have reduced time in ports," said mugtech. "It is the way of Norwegian Star until further notice."

Several of the ship’s 2020 voyages -- including the 15-night Central and South America itineraries and the transatlantic crossing to Southampton -- have also been changed.

The line's efforts to make up for Norwegian Star's mechanical shortcomings over the years have run the gamut from offering nothing at all to full refunds for each passenger and discounts of up to 50 percent on future cruise bookings with the line.

But, due to the terms of the cruise contract signed by every passenger before sailing, cruise lines are not required to provide travelers with compensation for missed ports or tweaked itineraries.

"The problem is NCL seems to be abusing this clause," Love my butler said. "Lots and lots of last-minute port changes and cancellations on many NCL ships recently. Customers are getting fed up."

Below is what we know about the affected cruises in 2020:

February 1: Port arrival and departure times have been adjusted across the board for Norwegian Star's February 1 voyage, with the ship arriving in Puerto Madryn, Stanley and Puerto Chacabuco later than initially slated.

The Roll Call thread does not discuss passenger compensation or provide details on shore excursion refunds or adjustments.

February 15: Cruisers can expect two additional hours in Santiago, one hour less in Puerto Montt, a half hour less in Ushuaia and two hours less in Montevideo on the ship's February 15 cruise.

Information on compensation and cruise line-affiliated shore excursion adjustments was not immediately apparent on the related Roll Call thread.

February 29: Passengers on the February 29 voyage will lose half an hour in Montevideo, gain half an hour in Stanley, lose an hour in Puerto Chacabuco and arrive in San Antonio, Chile, an hour earlier than planned for disembarkation -- all due to what the line is calling "a scheduling conflict."

The Roll Call thread for this sailing does not list compensation, but shore excursions purchased through Norwegian will be adjusted to the appropriate start times, based on the ship's arrival in each port.

In the affiliated Roll Call, jmscat10 reports that the line has offered passengers on this sailing a future cruise discount of 20 percent due to the loss of two port calls.

March 29: As noted on the May 17 roll call, Norwegian has cancelled a call on Kralendijk, Bonaire on the March 29 sailing and replaced it with a sea day. Passengers will spend two hours less in Curacao, and will now stop at Nassau, Bahamas from 7 a.m. to 1:30 p.m. before arriving back in Port Canaveral (Orlando).

April 9: The April 9 sailing -- originally a voyage sailing roundtrip from Brooklyn -- has been canceled entirely and replaced with Norwegian Star's new transatlantic crossing (see below). Affected guests were moved to a similar itinerary aboard Norwegian Dawn. Numerous posters stated they were never notified by Norwegian about the change, and learned instead either on the Cruise Critic message boards or by logging into Norwegian's site to view their voyage. This sailing is only available for booking on a limited number of booking sites and is not available on NCL's U.S. website.

April 19: Norwegian Star’s transatlantic crossing originally scheduled for April 19 has now been moved ahead by 10 days, and will depart April 9, 2020. By far the most sweeping change to the ship's sailing schedule, the new transatlantic voyage drops the ports of Liverpool and Cobh (Ireland), adds an additional sea day and a call on Cherbourg, France; and changes port times for the existing ports of Halifax, Belfast, Dublin, Le Havre (Paris), and Portland (UK). The embarkation port has also been changed from the Brooklyn Cruise Terminal to Manhattan.

The announcement -- which came over the holiday season -- was accompanied by a goodwill gesture of $150 per cabin and an offer of $300 per person for air change fees for passengers who booked air independently. Those who booked shore excursions or other options through Norwegian for the original crossing will have these refunded to their original form of payment.

Posters noted that Norwegian initially did not mention cancellation options, and took umbrage with the fact that the change was made shortly after final payments were due. Posters who called Norwegain directly were informed that they could cancel without penalty by January 7, 2020.

Norwegian has listed everything from mechanical problems and scheduling conflicts to weather and harbor master whims as reasons for switching up the itineraries on 85 percent of Norwegian Star's voyages in a span of seven months. It's unclear which of these is most heavily to blame for the ongoing changes.

The bad news: Because Norwegian has made alterations to the ship's itineraries into April, it's unlikely that the issue will be fixed before spring, assuming mechanical problem exist.

The good news: The line is offering some fantastic deals on Norwegian Star sailings in the New Year. For example, we saw a 15-day South America voyage on the ship from about $25 per person, per day. If you're flexible and don't have your heart set on a port call that could be canceled, it's a great way to cruise at a deep discount.