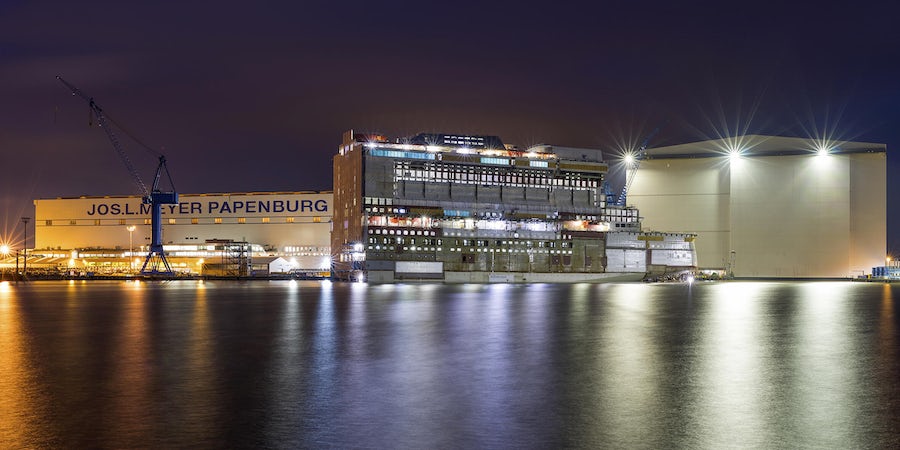 (1:35 p.m. EST) -- Small, intimate ships are all the rage now, from lavish yacht-like vessels to rugged expedition cruise ships. Getting these ships built and on the water, however, has proven to be a struggle for many cruise lines, as companies grapple with a huge industry orderbook and issues at various shipyards.

In recent months, small ships like Scenic’s Scenic Eclipse; Ritz-Carlton’s Evrima; and Hurtigruten’s Roald Amundsen have all been delayed due to issues with the shipyard that was constructing them, even as the biggest yards churn out the industry’s largest ships with record time and precision. SeaDream Yacht Club has outright canceled an order for its planned expedition vessel, SeaDream Innovation, and Star Clippers may not ever take possession of its completed ship, Flying Clipper.

To understand why these delays and cancellations are happening, it is important to explore the nature of what modern shipbuilding looks like. The major players in the cruise industry – yards like Italy’s Fincantieri and Germany’s Meyer-Werft – have order books that stretch into the next decade. A company wanting to build a new small ship can end up waiting ten years to get a spot at one of the more established yards that are experienced in building cruise ships of all shapes and sizes.

To avoid that decade-long wait, many new cruise operators are going with smaller yards with fewer deliveries scheduled. These yards are all technically competent, but many haven’t necessarily built cruise ships of this style and complexity before.

Although small, a luxury expedition ship represents a massive undertaking. The ship must meet and adhere to strict technical, regulatory and environmental specifications. This can range from having ice-strengthened hulls, specially-insulated bilge keels and water treatment plants, shielded propeller systems, and multiple fuel sources that can range from diesel-electric to liquefied natural gas to battery power to run hotel and marine operations.

Then, there’s the “fitting out” – a process by which the ship’s interiors are constructed and finished. If a yard has only previously built commercial ships or ferries, the level of fit-and-finish required for those vessels is very different from that of small luxury ship. A yard’s go-to workforce may not have the experience in crafting high-end marine interiors. And if deficiencies are found, this can cause further delays at the shipyard or when the ship is handed over.

Cruise lines do have some recourse: they can refuse to accept the ship during the handover ceremony if it fails to meet certain technical specifications around weight and top speed. But even getting ships to the handover point has been a long and arduous road.

Scenic was forced to delay the launch of its luxury yacht Scenic Eclipse after a number of issues at the Uljanik Shipyard in Croatia that included worker strikes, financial mismanagement, frozen bank accounts, and management turnover. The cruise line tried to invest in the shipyard using its own money and a consortium that included Fincantieri to ensure the vessel would see the light of day, but that effort was turned down by the Croatian government. The ship finally had its debut in September.

While the company wouldn’t comment on the ship’s construction history, it did say that it expects to announce additional new builds in the future.

The Ritz-Carlton Yacht Collection is watching the same scenario play out with its forthcoming Evrima. Problems at the Hijos de J. Barreras yard in Vigo, Spain ranged from issues surrounding delivery and project cost, the previous board of directors at the shipyard, and worker unrest, Ritz-Carlton announced in October that Evrima would be delayed until June; a five-month delay.

Ritz-Carlton had to go to the length of hiring an independent auditor to look at the shipyard. That report discovered management challenges, subcontractors not working to schedule, and other issues. Another line building at the shipyard, Norwegian operator Havila Kystruten, discovered weight and balance issues with its own under-construction vessels. A few weeks ago, the shipyard cancelled all of Havila’s newbuilds abruptly. Havila interpreted that as a sign the yard was preparing to liquidate and noted the entire management team had been removed and 1,300 workers had not returned to the yard.

Ritz-Carlton has reportedly been put in the unenviable position of having to bail the shipyard out financially in order to ensure its Evrima is completed. The company declined to comment for this article, but is proceeding with launch plans, recently announcing visits to 50 ports during the 2021 sailing season.

Ritz-Carlton isn’t alone in its experience.

Norwegian ferry and expedition cruise operator Hurtigruten was forced to purchase the Kleven shipyard in Norway in order to complete the 530-passenger Roald Amundsen after numerous delays at the yard. But the investment appears to have paid off. The line announced in December that the ship’s fleetmate, Fridtjof Nansen, was completed three months ahead of schedule. That gives the company more time to fine-tune the ship’s operation and even to add several pre-inaugural cruises.

And the line has future expansion plans, said spokesman Rune Thomas Ege. “This is just the beginning. We will continue to grow, and to grow, we will need more ships.”

Still, Hurtiguten doesn’t plan to be a long-term shipyard owner, he said. “Kleven yard is currently going through a restructuring to further strengthen their competitive edge and position the yard for future growth.”

As for Star Clippers, the line says due to litigation it can’t comment on the status of the 300-passenger Flying Clipper. “We continue to remain optimistic as to a final outcome,” it said in a statement.

Last June the company acknowledged that its new ship, which was under construction at the Brodosplit yard in Croatia, was running late, but it still anticipated delivery this year. At the time the shipyard cited complications in the ship’s design, although it said the vessel would soon be completed. However, a Croatian newspaper reported the contract had been canceled.

Why do cruise lines take the risk? Imagine your car needs repairs. The shop you always go to and trust has a two-month waitlist. The shop that’s untried can get you in tomorrow. Where are you going to take your car?

Next year alone, 10 small ship luxury and expedition vessels are scheduled to hit the waters. That number rises to 12 new vessels in 2021 and nearly as many in 2022.

The unfortunate downside of this small-ship newbuild craze is that when these ships finally do see the light of day, there can often be operational issues and fit-and-finish problems that appear quite often into revenue sailings. These are all things that can be fixed but require more capital to be sunk into a project that already looks like an aquatic version of The Money Pit.

The unexpected additional capital that these lines have had to put into getting their first newbuild off the ground can see future plans for expansion threatened. Scenic isn’t talking about Scenic Eclipse II anymore, and Ritz-Carlton is mum on what happens to the original three-ship order once the line finally gets Evrima completed.

Some lines are taking a different approach altogether. After initially announcing a newbuild to be called SeaDream Innovation, ultra-luxury player SeaDream announced it was cancelling its Memorandum of Understanding with shipyard Damen in order to concentrate on its existing fleet that consists of SeaDream I and SeaDream II.

In its statement announcing the change in plans, the line’s owner and president Atle Brynestad insisted his firm was actively pursuing other newbuild opportunities. “The company has been debt free for several years and has the equity needed to expand the fleet. We hope to announce a new ship in 2020.” A spokeswoman would not provide further details.

When unexpected delays do happen, all cruise lines can do is compensate the affected passengers and offer rebates and incentives to move over to other sailings – if that is an option.

Sea Cloud Cruises has had probably the longest road to getting its newbuild sailing. Originally started in 2008, the bankruptcy of the shipyard led to the seizure of the incomplete hull of what was to be Sea Cloud Hussar. A decade later, the line has re-purchased its own hull and is scheduled to complete the renamed Sea Cloud Spirit in in August 2020.

What can cruisers who want to sail aboard these new and exciting ships do in the meantime? First, understand that if there are shipyard delays, cruise lines will typically move all affected guests to new sailings at no charge.

Second, it’s always a good idea to book sailings that occur a month or so after the ship has been in service. While it is exciting to be sailing aboard the maiden voyage of a new ship, these runs are sometimes known as “shakedown cruises” – voyages where some of the last-minute bugs and kinks are worked out. If you can go with a sense of adventure and flexibility, these cruises are a great option. But if you would prefer to not deal with potential problems, give the ship a bit of time after entering service before booking.

Lastly, don’t be afraid to ask your travel advisor to contact the cruise line for status updates of the new ship you’re booked on, or checking here on Cruise Critic. Forewarned is forearmed.